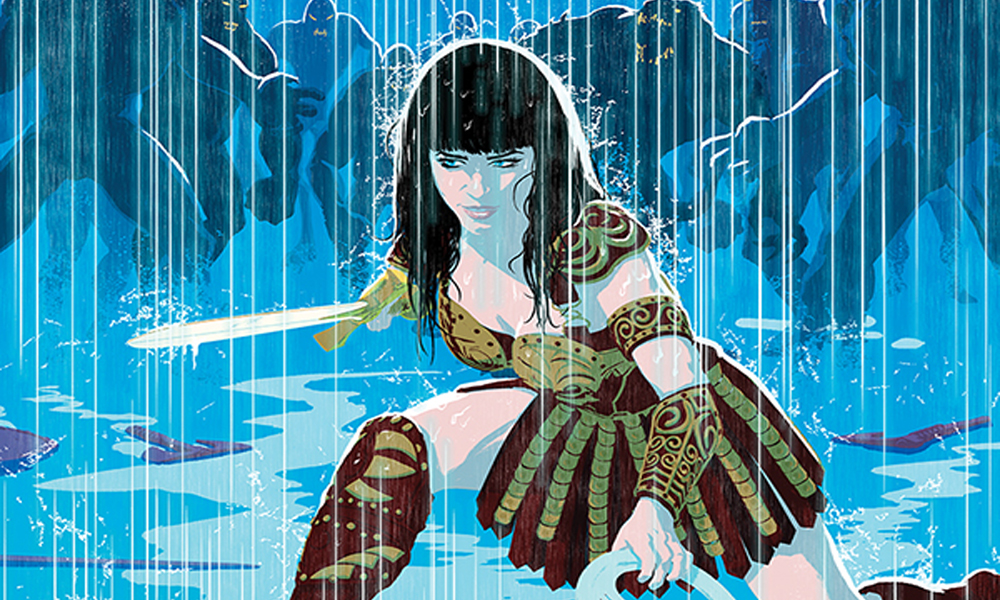 Set during “a time of ancient gods, warlord and kings”, as well as unsurprisingly based upon the American fantasy 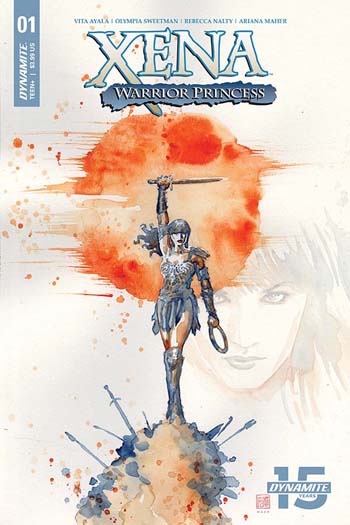 television programme which first aired in 1995, Vita Ayala’s somewhat sedentary script for Issue One of “Xena: Warrior Princess” is arguably going to only appeal to die-hard fans of the old Renaissance Pictures series rather than educate a new audience about the exploits of the formidably-skilled female fighter. Indeed, anyone unfamiliar with the extensive background of this comic’s titular character will probably be left somewhat bemused by its basic premise that Robert Tapert’s co-creation is apparently a desperate people’s suitable alternative to the heroic son of Zeus and Alcmene, Hercules; “I heard Hercules was nearby. Have you seen him? The children of my village are in danger! X-Xena? Then my prayers are answered.”

Of course, that’s not to say that the “Wonder Woman” writer doesn’t at least try to impress upon any perusing bibliophile that this book’s main protagonist is a legitimate Greek legend in her own right, by having both Xena and Gabrielle involved in a pretty frantically-paced skirmish during this publication’s opening pages. Nonetheless, besting a couple of emaciated desperadoes who sought to rob a hapless young family travelling along a lesser-used forest pathway is hardly on par with something like the Twelve Labours of Heracles, even when the action sequence it generates does depict the warrior princess skillfully utilizing her famous razor-edged throwing weapon.

Disappointingly however, what then follows is a disjointed narrative which halfheartedly follows both adventurers in their separate investigations of the village of Sideros. Gabrielle’s interview of the town’s children undeniably proves by far the more interesting of these sequences, yet the comic’s irritating insistence in overlapping speech from Xena’s attendance at a village meeting over these scenes of adolescent super-human strength soon proves a disconcertingly distracting technique for telling two sides of the same tale simultaneously.

In fact, by the time “newcomer” Olympia Sweetman begins proficiently pencilling this twenty-page periodical’s conclusion little is still clear as to what has specifically occurred within the small settlement until Lydia fortunately disregards Discord’s blood oath, and spells out the elders’ deal with the disagreeably jealous goddess in plain words. This revelation finally imbues Ayala’s storyline with some much needed rationalization, and leads to a desperate flurry of activity as the residents despicably attack the two strangers who have bravely sworn to safeguard their children. But by this time Sideros’ adult population have proved themselves so unlikable that most readers will probably be wishing that Xena would simply leave them to their well-deserved fate, so that the fighter’s next issue will give her an entirely fresh start…