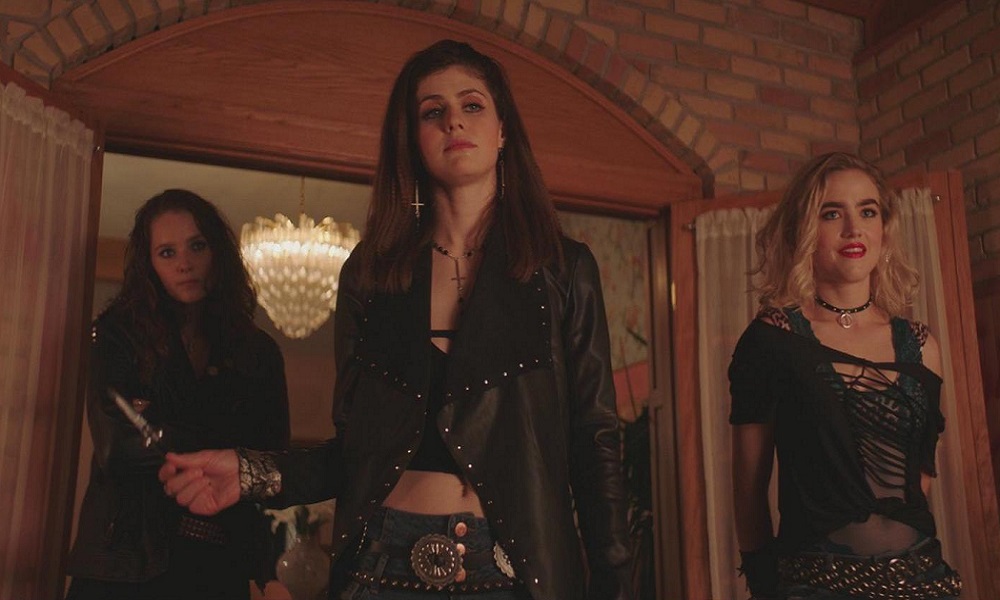 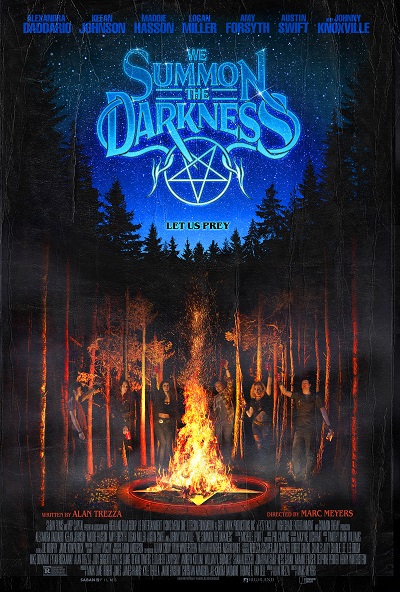 Everything new is old again. Nostalgia pretty consistently skips a few decades back, which explains the obsession with the 80s that television and films is on right now. This isn’t just aesthetic, but We Summon the Darkness especially wants to cram a bygone era right down your throat with ring pops, Thrasher logos, big box TVs and synth chords on the soundtrack. The appeal to the 80s here is also in the repetition of tropes probably thought expunged from modern media: dull-witted drunken teenagers wandering sunbaked backroads until being lured into the clutches of murderous dealings.
The acting is overwrought to the point of parody across the board.

There’s a really clever twist here that’s supposed to make up for all of these cliches. You may have to sit down for this…but the histrionic hypocritical hick-town evangelical Christian stereotypes who are introduced as such…are the BAD guys while the good-intentioned surprisingly socially conscious satanists are the innocent victims.

I know: you’ve never seen such a brave and original concept. Before you cry ‘spoilers’ the poster gives away this genius swerve anyway. You want to make a statement? Fine, but don’t grind your already dragged horror film to a screeching halt just so a mouthpiece character can rant about your beliefs.
I think the film supposes by at times suggesting this production is a comedy it can somehow salvage a little cleverness from both a tired premise, a tired twist, and a tired presentation. See, as hateful and didactic as the film can seem towards Christians, it’s not REALLY an extended screed because it’s a SPOOF of horror movies at heart! Maybe so, but it’s a bad spoof.

It’s not very funny, certainly not fresh, not even exciting. Every death is telegraphed. The effects are poor. Everything takes FOREVER to happen, from cars parking or driving to nowhere to endless screeds and smalltalk, both equally shallow and meaningless.
You don’t care about the heroes because they react rather than act to events and you certainly don’t care about the cartoon villains.
If you really need to get in your bible bashing you have only the entirety of every network production for the last couple of years to sate your thirst. If you like movies about serial killers in podunk USA and you haven’t already seen The Texas Chainsaw Massacre you are missing nothing but wading through another dreadfully paced, poorly acted, badly written and ultimately disappointing addition to the stack-up of poor imitation 80s slashers to be forgotten in bargain bins everywhere.