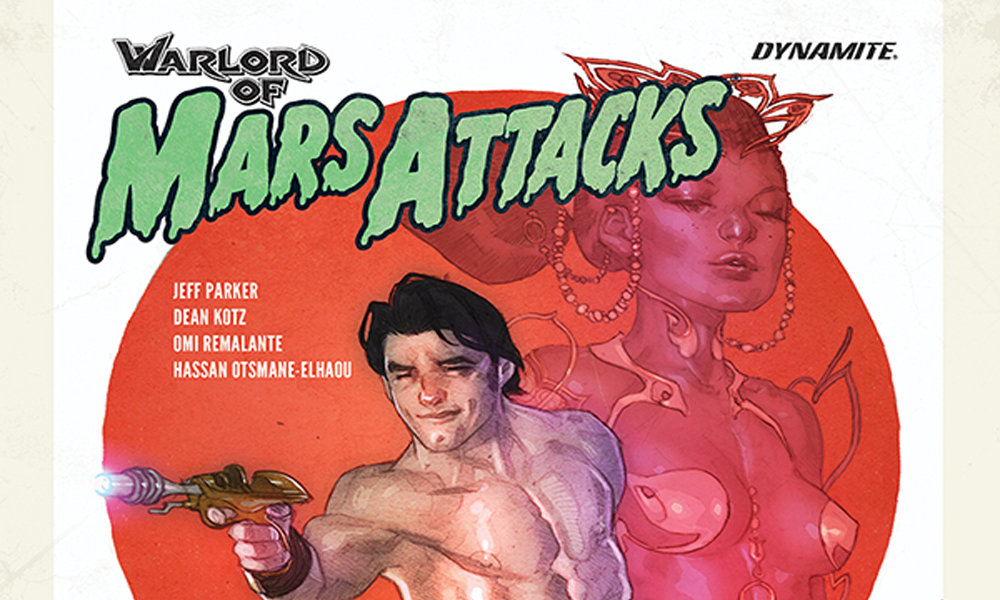 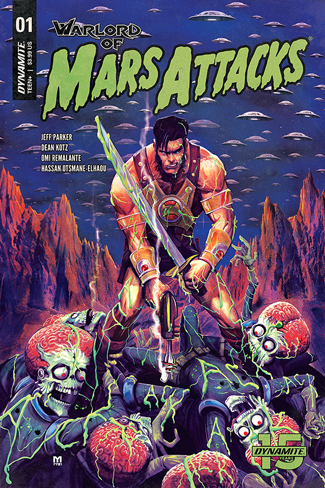 publication proclamation that “John Carter meeting the Mars Attacks! Martians may sound insane…” For whilst this convoluted crossover by “Dynamite Entertainment” supposedly “works” in the mind of the Burlington-born writer, his script for Issue One of “Warlord Of Mars Attacks” makes absolutely no sense whatsoever as it opens up with the green-skinned ‘Moonheads’ successfully breaching the outer defence barrier of Helium, subsequently depicts the self-destruction of the Red Martian City-state of the Fourth Planet and yet disconcertingly concludes with modern-day Doctor Edgar Norman suddenly sticking a gun to the back of Ramon’s head, so as to ensure the Jet Propulsion Laboratory visitor diverts his car journey to Arizona rather than his mother’s underground bomb shelter during an all-out extra-terrestrial invasion of California.

Admittedly, all of the action set upon Barsoom is definitely both fast-paced and pulse-pounding, especially when Dean Kotz enthusiastically pencils the American Civil War veteran leaping aboard a Martian saucer, skewering its occupants with a single sword thrust and then blasting the rest of his adopted home’s invaders with the flying object’s laser guns. But even this sense-shattering sequence debatably disappoints due to being bogged down with some truly dire dialogue as the hideously cruel aliens stiltedly shout “It’s the mighty destroyer of our kind — The Warlord John Carter!” upon first seeing the dashing titular character, and Edgar Rice Burrough’s lead protagonist supposedly sums up his heartfelt affections for his soon-to-be-dead wife, the Princess Dejah Thoris, with the farewell “You are the strongest woman in all creation…”

Just as clumsily penned is Parker’s narrative portraying the Insight Lander’s safe arrival upon the surface of northern Mars from its Pasadena-based control area. Transmitted live across the television network, the scientists quickly discover that a local contest winner has easily befuddled the operation’s so-called security by simply swiping his roomie’s visitor pass and that their unmanned mission has been detected by the “power-hungry little green men.” This bizarre sequence of dialogue-heavy events makes little sense and badly jars with all the aforementioned action, until it inexplicably culminates with hundreds of the Martian’s death-dealing saucers descending upon the Earth in order to blow up as many planes, buildings, cars and people as the diminutive space invaders can target; “It’s just an incredible co-incidence of timing, Dave.”