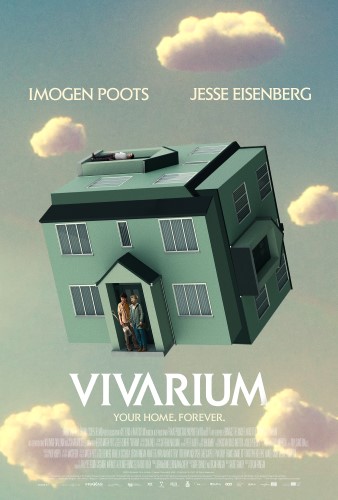 Saban Films has started to diversify I guess since the Power Rangers reboot debuted to no praise. Now they’re tossing cash in the direction of arty horror films.

Vivarium is so much an archetypal arty horror film it could serve as a mad-libs for the very concept. Young unassuming couple ushered into strange surrealistic but mostly boring situations by eccentric character actor whom no one would trust in real life. I’ve described practically every horror film in the last couple of years, and Vivarium seems to believe somehow this will still set them apart from the crowd.

Here we’ve got echoes of the horrors of suburbia, some kind of garbled whinging about the nuclear family and possibly gentrification as well as a metaphor about cuckoos which is so on-the-nose it’s the first thing playing over the credits and title.

Weirdly there’s almost a theme of ungrateful children, which seems like the opposite of a ‘hip’ theme for such a hipster movie. Mostly were all here for a self-impressed showcase the setting: fake looking buildings and fake looking green-screened skies.

I realize the point was to make the production LOOK unrealistic and phony, but it succeeded too well. It’s retroactively ironic that a movie about people being bored into insanity might be a little tedious. At no point did I believe much of the acting or the locations, not even the big name stars who seemed at times to have trouble understanding what they were supposed to be feeling or expressing in such a profoundly goofy story.

So what’s the big mystery? It’s not clear the filmmakers care. This is a bit like the television show Lost where the assumption is made that if weird questions are raised the audience can read into the unwritten portions of the script their own profundity.

What do YOU think it all means? Maybe it doesn’t mean anything at all!It seems like a giant copout because who needs to consider the lore of their own production if they just are deliberately obscure and have the budget to at least make their production consistent and pretty enough to throw off any concerns.

I can’t rate it too low because at times it nails the atmosphere of sterile ominousness, but it’s short-lived. If you’ve got a world to explore, play it straight if it’s a horror film, don’t if it’s a spoof. If you don’t know what you’re doing, don’t waste my time with this kind of turgid cul-de-sac.