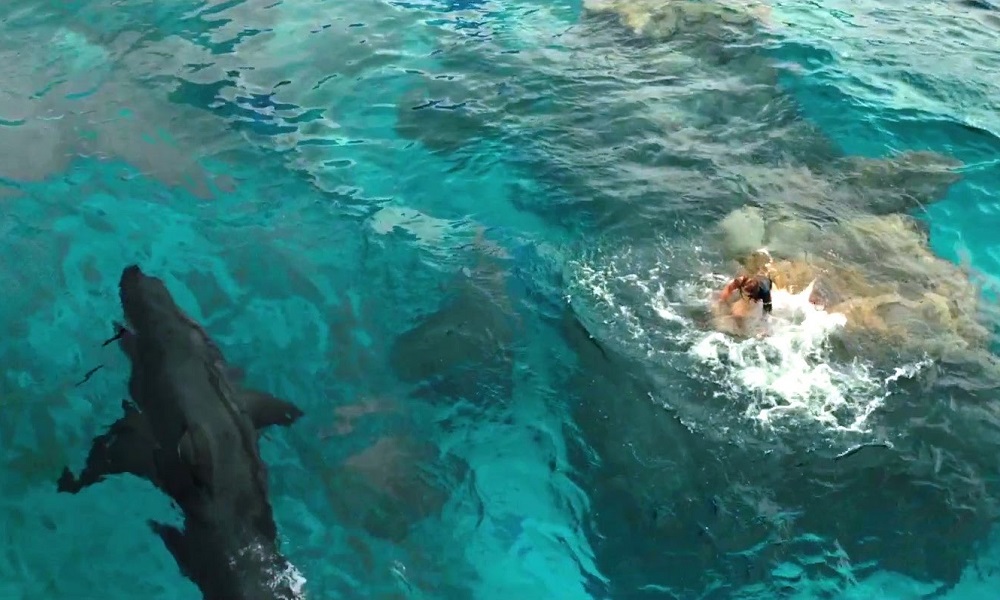 The Shallows had a big strike against it from the very beginning, simply because it’s a shark movie. We already have one of those, and we’ve more or less decided as a culture that we don’t need anything more from the genre. Oh, there are a few outliers – Sam Jackson’s big speech in Deep Blue Sea comes to mind – but Mr. Spielberg laid claim to this turf a long time ago, and nobody yet has the wherewithal to remove him.

The good news is that The Shallows doesn’t really focus on the shark. Well, it does, but only as a plot device. The shark exists as a danger to the main character – a nice young surfer lady (Blake Lively) who travels to a remote Mexican beach as a way of honoring her late mother – not as the focus of our attention. In the right context, it could be a bear or a faceless killer or a hurricane. It wants us to pay attention to the lead, not the gimmick. And with that, it slips out of the considerable shadow of Jaws and finds its own pace.

It’s doubly impressive because The Shallows has another pitfall to manage: the torture porn/survival horror vibe that was all the rage a decade ago. The movement burned out for a good reason – smug nihilism from grindhouse thrillers never sits well when filmmakers like Roman Polanski can deliver the real thing – and The Shallows flirts with irrelevance whenever it approaches that tone. But director Jaume Collet-Serra keeps his wits about him and moves just close enough to find the proper sense of natural and believable peril without succumbing to fashionably hip despair. It’s a delicate balancing act, matching the character’s attempts to stay alive quite well, and the director’s assured hand keeps it all in line.

Lively, too deserves a huge amount of credit, able to hold the screen almost solely on her own. The scenario itself consists of pure stimulus response. Girl goes surfing on unfamiliar, nearly abandoned beach. Shark attacks. Girl can’t get back to shore. Go. The challenge there is not only to make us believe in the scenario, but to accept the various twists and turns that keep her out there while also believing that this particular girl is not the giving-up type.

That’s important because otherwise the mechanisms of the plot would grow old: another trap that The Shallows avoids with careful attention to technical details. With someone we care about front and center, the film gives us a genuine stake in the game, allowing us to hope desperately that her various tricks and tactics will pay off, even if we can see how the filmmakers artificially extend the scenario past the point of plausibility. The artifice works, however, because Collet-Serra simply knows what he’s doing, and can evoke the right responses at the right time. (Among its other assets, it makes for a great surfer movie, especially in the early scenes.)

The weak points come with the shark itself, especially towards the end when the taut realist tone devolves into sea-monster-based silliness. There’s also some business with a seagull that doesn’t fit well with the rest of the film (it’s a tad cartoony, though it does provide some measure of emotional relief). But by then, we’re already hooked and The Shallows rapidly capitalizes on the audience goodwill to power past a shaky finish.

Indeed, the flaws almost become part of its selling point. Nothing about this movie should work, and yet most of it does… in spite of itself at some points, but strongly and confidently in a lot of others. It’s a minor miracle in many ways, tackling an almost impossible task and emerging with strength and assuredness. The box office rewarded those efforts this summer, but I think The Shallows may go further than that: a taut and effective thriller with the chops to stand up to the test of time. It can’t approach the king of this cage, but it’s smart enough not to try, a fact which ironically brings it closer to that state than anyone expected. Well done.

The disc itself is fairly typical: great sound and picture quality, with only a smattering of additional goodies. The extra features are sparse: five behind-the-scenes dogs coming in between 5 and 10 minutes apiece and a few cut scenes that were cut for good reason. Then again, an exercise like this stands or falls on its own merits, and the disc ensures that we get an ideal look at what a talented filmmaking team has put on screen.

One thought on “The Shallows: Blu-Ray Review”