Ever hear of this movie called Rear Window? 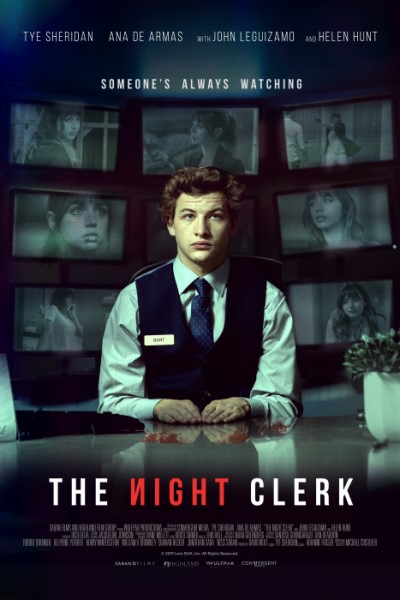 If Rear Window is too old school for you, maybe you remember the Shia LaBeouf remake Suburbia?

You’ve already seen The Night Clerk if you’ve seen either of these films. Whereas Suburbia tried to hide its adaptation by ratcheting up the camp and action, The Night Clerk tries to put an original spin on things by putting front and center a popular zeitgeist subject: Asperger’s Syndrome.

I actually have Asperger’s Syndrome and although my own experience has probably been very different from many with the same developmental disability it continues to confuse me as to how this condition is portrayed in film. Yes: people with Asperger’s tend to be awkward in social situations, hold long rambling conversations, focus excessively on one specific interest…but they are NOT robots or space aliens trying to mimic human behavior. Between Bart in this film’s wide-eyed twitching and the kid in the recent The Predator movie who could memorize anything you’d think Asperger’s was either super powers or a form of profound autism.

Iffy portrayal of reality aside, The Night Clerk is polished and pretty in presentation but glacially slow in pace. The dialogue might seem like a bold new exploration of pragmatism if it didn’t basically crib from the movie Donnie Darko and the acting by a couple of aging name actors is quite decent but they have little meat to bite into. Not a lot of tension when the lead character is kind of creepy and dull, the romantic subplot seems driven by pity, and the mystery isn’t so much a whodunit as a ‘when will it arbitrarily end’ it.

If you want a zen like experience of less than Hollywood-attractive people staring into space while calm music plays and the camera lingers you could do worse.

The Night Clerk opens in select theaters, on demand and digital on February 21, 2020.