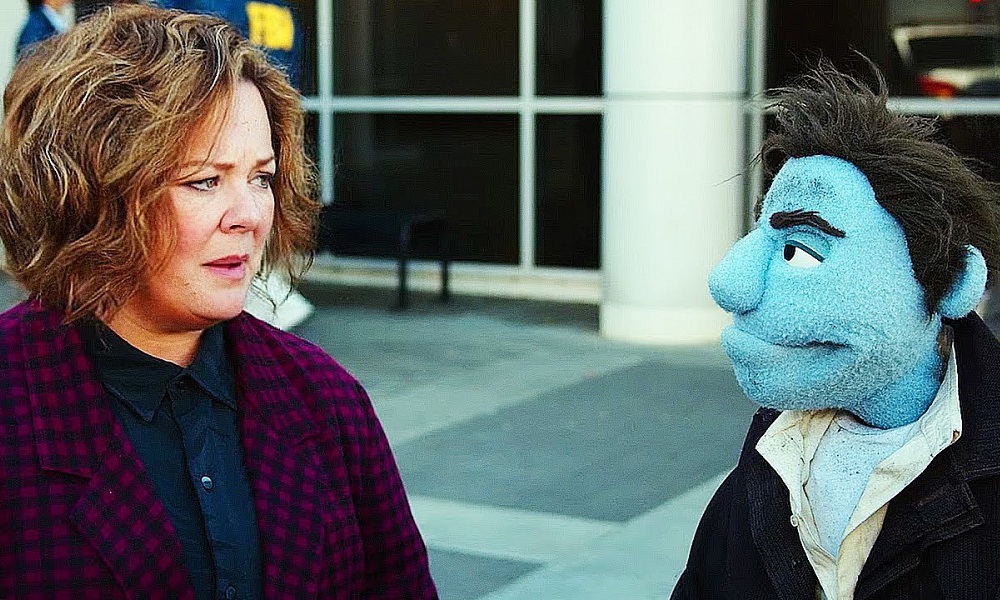 The late Jim Henson always believed that his puppet creations needn’t be limited to family fare. The Dark Crystal was an ambitious attempt to tell a surprisingly adult fantasy tale, after all, and he produced several other grown-up odds and ends throughout the years (including a very blue sketch on Saturday Night Live). After he passed, it fell to his son Brian to keep that notion alive, and he too scored some success over the years. Witness Farscape, a very grown-up sci-fi saga that still retains the unique Henson zeitgeist, or his brilliant rendition of Stephen King’s short story Battleground. It can be done, and the junior Henson can clearly do it. But now comes The Happytime Murders – an effort to really go for the R-rated throat – and though it gets full marks for ambition, it falls depressingly short of the mark.

Certainly, the general concept feels solid enough: a gussied-up neo noir in which some of the participants are fuzzy puppets. Roger Rabbit did something very similar and became a classic. But having established a strong base for what it wants to do, the movie proves utterly incapable of finding a way to do it. It just kind of sits there, content to coast on the fundaments instead of taking them to their logical extremes. There’s only so many times a puppet can say “fuck” or engage in a lewd act before the novelty wears off. Henson knows better and has shown better in the past. Here, it never gets out of second gear.

In this alternate universe, puppets live and work alongside humans, though they’re relegated to second-class citizenship. That’s where we find fuzzy gumshoe Phil Phillips (Bill Barretta), once the only Person of Felt in the LAPD, but drummed out of the department after a fatally misplaced shot. His former partner (Melissa McCarthy) still holds a grudge about the incident, but they’re thrown together again when former cast members of a wildly successful puppet-dominated sitcom start turning up dead.

Replace the Henson creations with flesh-and-blood humans, and the scenario wouldn’t pass muster on a third-rate CSI knock-off. It bets everything on one trick – adding G-rated figures to an R-rated crime drama – and simply doesn’t dare to go any further. That proves fatal. The last thing a “transgressive” comedy should be doing is pulling its punches, and yet The Happytime Murders proves resolutely unable to hit us where it counts. Concepts that should be background material at best (the puppets shit glitter, for example) end up front and center, only to wither beneath the excess attention. The mystery itself holds little interest – basically the Mutt-and-Jeff duo visiting various crime scenes and engaging in shoot-outs with black-clad strangers – and without a stronger sense of character, the puppets themselves quickly lose much of their charm.

Indeed, it’s a strange testament to the sheer force of will involved that any of it works. The best moments come from Henson’s improvisational style – a staple of Muppet-based efforts from time immemorial – which produces an easy chemistry between the live actors and their rod-controlled counterparts. Barretta’s an old pro (he performs Pepe the Prawn, Dr. Teeth and Rowlf among others), and McCarthy makes an excellent foil for him. She actually carries the film on her shoulders more than once, though she gets a big hand from Maya Rudolph as Phillips’ true-blue secretary. Sadly, a very game Elizabeth Banks is largely wasted, but even so, the better elements grant The Happytime Murders a certain status as a cinematic oddity. I’m not sorry it’s out there – it’s different enough to merit a look if you’re curious enough – but considering the pedigree, it should have been so much more.

Frankly, the Henson Company may not be right for this kind of project. They remain the brand of Kermit and Sesame Street, after all, and they certainly wouldn’t risk those properties on a mere throw-off like this. You can sense that hesitation in every frame of the film, and the feeling proves fatal. That brings us to one other comparison, perhaps the most apt: Team America, which stemmed from filmmakers much more accustomed to pushing boundaries. It effortlessly leapt across the chasms that bring The Happytime Murders screeching to a halt, and with Parker and Stone’s effort fifteen years in the rearview mirror, any remaining edginess this new one might be banking on simply melts away. Without more to offer, it just can’t get started… and even if it did, it wouldn’t have the first idea where to go.