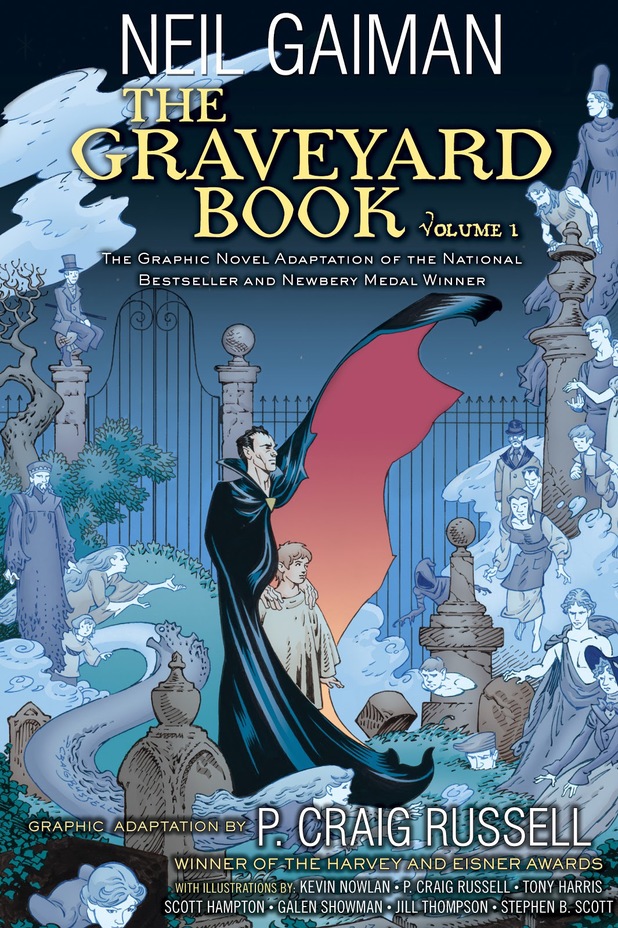 One of my favorite books of the past few years was Neil Gaiman’s remarkable “The Graveyard Book”, a magnificent blend of horror and dark fantasy that won Gaiman a Newbury medal, the Carnegie Medal, as well as Locus and British Fantasy Awards.  The book, which is in production to come to life on the silver screen, was adapted into graphic novel format by renowned artist P. Craig Russell and features art not only by Russell but also by Kevin Nowlan, Tony Harris, Scott Hampton, Galen Showman, Jill Thompson, and Stephen B. Scott.

The book tells the story of a mysterious serial killer known as “The Man Jack” who murders every member of a family except for one…a toddler.  Jack arrives in the child’s room to find the crib empty. The toddler crawls out of the house and up a hill to a graveyard where he is found by the spirits in the cemetery.  After a lengthy debate by the ghosts, they decide to keep and raise the child.  They name the child Nobody Owens, “Bod” for short.  Bod is protected by Silas, a Dracula-like vampire.

This graphic novel covers the first half of Gaiman’s story, dealing with Bod’s many adventures in the graveyard.  He is schooled in various subjects by the ghosts as well as Miss Lupescu, a werewolf.  Bod meets a young girl named Scarlett Perkins who likes to play in the graveyard when her parents visit.  The pair becomes fast friends.  Bod encounters the ancient creature known as the Sleer, the oldest being in the Graveyard and later has a run in with a trio of ghouls who try to kidnap bod off to their dark world.

Gaiman’s timeless story is at once terrifying and touching with heavy doses of mystery thrown in.  What is the Sleer and who is his master?  Why did the Man Jack kill Bod’s family and why is he still after Bod?  The Sleer, which we discover date back to before the time of Rome conjure up images of the ancient, reptilian creatures from Robert E. Howard’s story “Worms of the Earth”.  Neither good nor evil, and both single and multiple beings, the Sleer is still one of the most intriguing and terrifying creatures in the book.

Each artist handles a chapter in the book with Hampton and Harris teaming for Chapter three.  While the styles of the artists are different there is a remarkable amount of consistency in the tone in which they present their sections.  I enjoyed each of their chapter’s immensely but I think my favorite was Chapter Four by Galen Showerman.  In this chapter, Bod leaves the safety of the Graveyard for the first time and promptly finds himself in trouble with a greedy antique dealer and the Man Jack hot on his tail.

If you have never read the book before this is a great place to start.  Outstanding!

One thought on “The Graveyard Book Volume 1 Book Review”