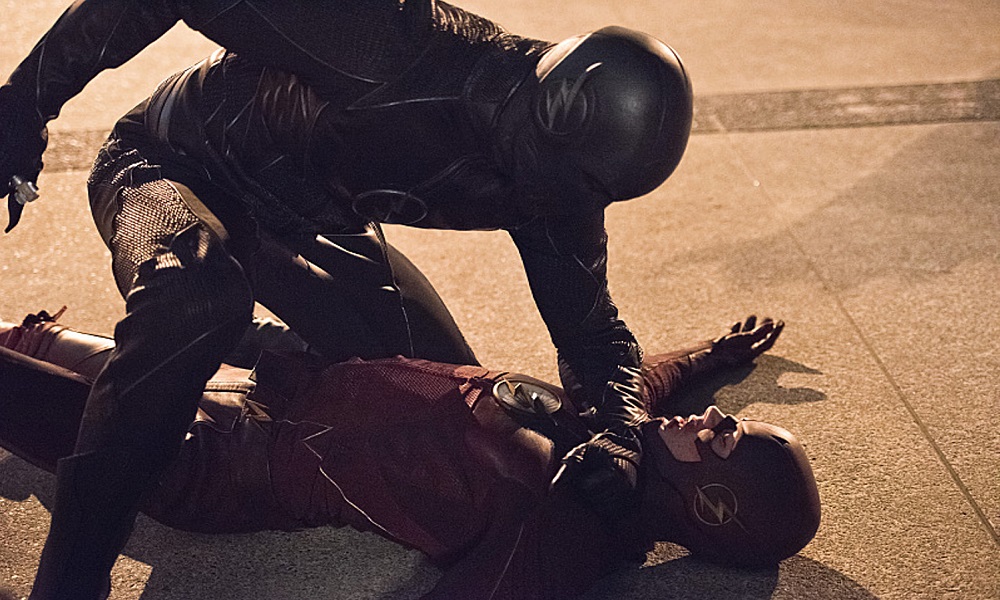 Barry tries to convince Doctor Light to assist him in capturing Zoom. However before he can put his plan into place she escapes her containment cell and vanishes into the night. As an alternative, Barry enlists the aid of Doctor Light’s Earth-1 counterpart, sports reporter Linda Park. As they already have Light’s suit, Cisco builds gloves to imitate Light’s powers. Light revealed that she was to throw The Flash’s chest emblem through a portal to Earth-2 as proof she had killed him.

The team now plans to stage a fake fight between The Flash and Park disguised as Doctor Light to draw Zoom into their world. Harrison Wells as developed special darts which will be able to dampen Zoom’s powers. He and Joe hide along the docks, waiting to catch Zoom by surprise. But despite Linda “defeating Flash” and throwing the emblem through the portal, Zoom is a no show.

When they least expect it, Zoom arrives, kidnapping Park in order to draw Barry out. The two speedsters square off for the first time. It is the usual plot device of the show that the villain normally gets the better of Barry the first time they face off. Well…not only does Zoom get the better of Barry, but he nearly beats him to death. Adding insult to injury, Zoom takes Barry to the local news, the Central City Police station, and to S.T.A.R. Labs to show off his trophy and mock The Flash. His cockiness is his undoing as Cisco is able to shoot him with a dart, hurting him, but still leaving him strong enough to escape. Barry is left in a coma and when he revives, he can no longer feel his legs.

The battle with Zoom was the highlight of the episode. Knowing he can’t match Zoom’s speed Barry tries a strategy that will put him on equal footing. But Zoom shows not only is he more powerful, but also more experienced. He literally catches a lightning bolt that Barry throws at him and hurls it back. And that voice of Zoom…like tombstones grinding together. He is definitely the most intimidating enemy that The Flash has faced. I got caught up in the moment thinking screw Green Arrow, where is Superman or Green Lantern to save Barry!

Getting to the big fight was somewhat less fun. The entire segment with Linda training was filled with ham and cheese (but funny). But the question I have is why even stage the fight to begin with? Can Zoom look in through the portal? And if he could wouldn’t he know the fight was staged. Buy why would Light need to toss the emblem through the portal if he could see? Did not make a lot of sense. The scenes between Cisco and Wells as Cisco attempted to Vibe him were a lot fun. Cisco is a great character who plays off others tremendously well.