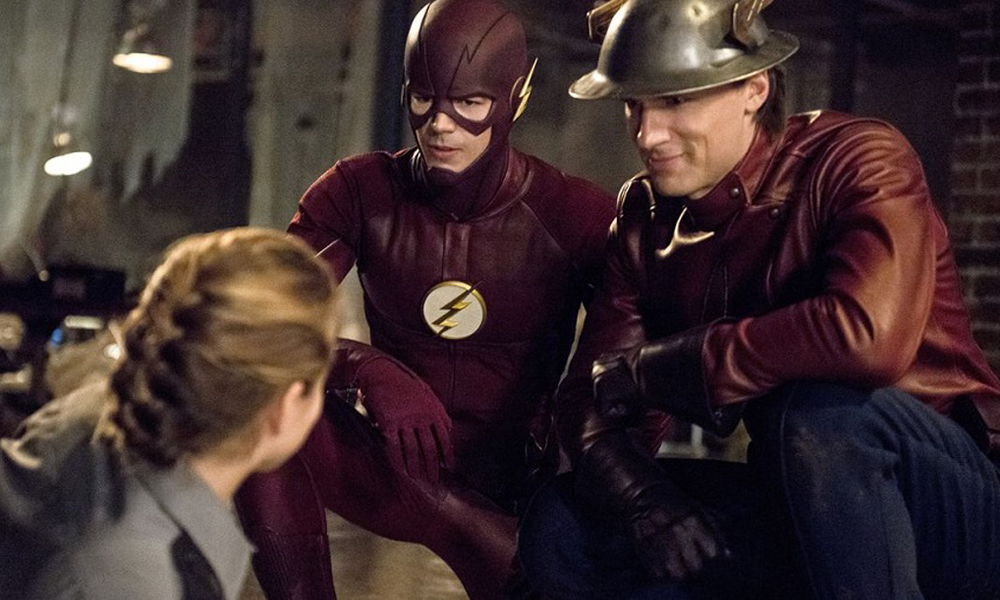 “Flash of Two Worlds” picks up exactly where last week’s episode left off…A mystery man who identifies himself as Jay Garrick (Teddy Sears) arrives as S.T.A.R. labs with a warning for Barry and the rest of the group.  Of course as you no doubt know, Jay Garrick is the Golden Age Flash in the DC Comics Universe.  Jay reveals that the singularity from last year’s season finale created a breach between Jay’s world and Barry’s.  Jay found himself trapped on Barry’s world six months ago and has been following Barry and the rest of the team to learn all he can about them. Professor Stein, while explaining the theory of the multiverse, comes up with the tags of Earth-1 and Earth-2.

Jay tells Barry that he, too, was a speedster but lost his powers when trapped on this world.  He also warns Barry about the villainous Zoom, who Jay had fought numerous times.  After Atom Smasher failed to kill Barry last week, Zoom has sent another villain from his world to kill Barry named Eddie Slick, aka Sand Demon.  The Sand Demon has powers similar to those of the Spider-Man villain, Sandman.  He is able to turn his body to sand making bullets useless against him.  He is also to shoot out his sand, in a hard fist to batter his opponents. 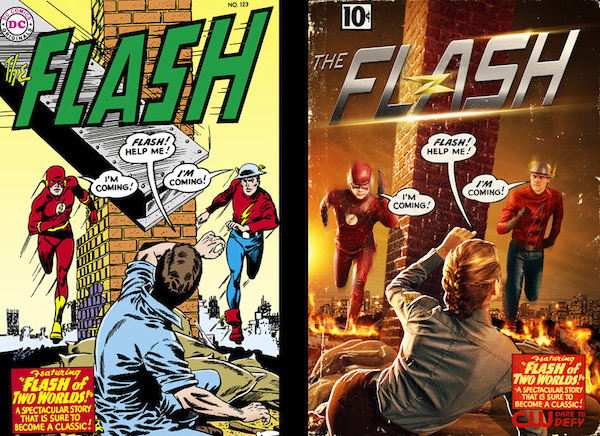 Jay, having been a speedster for a longer period of time, trains Barry to run fast enough to generate lightning bolts which he will need to take down Sand Demon.  Elsewhere this week, we get the debut of Patty Spivot, a rookie police officer who seeks to become a part of Joe’s metahuman task force.  Spivot was a minor character from the comics but in the New 52 reality she became a love interest to Barry.  Cisco divulges the psychic “vibes” he’s been having to Professor Stein.  And we also find out that there was not one, but “52” breaches created to Jay’s world.

While this week’s villain was entirely disposable, the episode was far more about setting up the rest of the season and Zoom as the primary antagonist.  With 52 breaches…and there is THAT number again…we know that Barry is going to encounter a lot more inhabitants of Earth-2.  As a long-time fan of The Justice Society and the Golden Age heroes in general, it was thrilling to see Jay Garrick suit up in his Flash costume, complete with the helmet recovered in the first season, even if he didn’t have his powers.  And credit the writers and Director for creating a wonderful tribute scene of the cover of Flash #123 which featured the first cross-over between the two heroes way back in 1961.  That is the kind of stuff that you cannot help but love.  The Flash has embraced its comic book roots more than any other superhero TV show to date.

It appears that Cisco’s powers might end up being different than those in the comics.  While in the comics he is able to project shock waves, in the TV show, at least so far, his powers are manifesting as having the ability to see into and detect alternate timelines.  This is a good thing as his character seems much better suited to action behind the lines.

It’s getting old hat but this was another enjoyable episode.  While I am still not crazy about Iris knowing Barry is the Flash and being a part of “the gang” the cast overall continues to be one of the best parts of the show from the supporting roles to the guest spots.