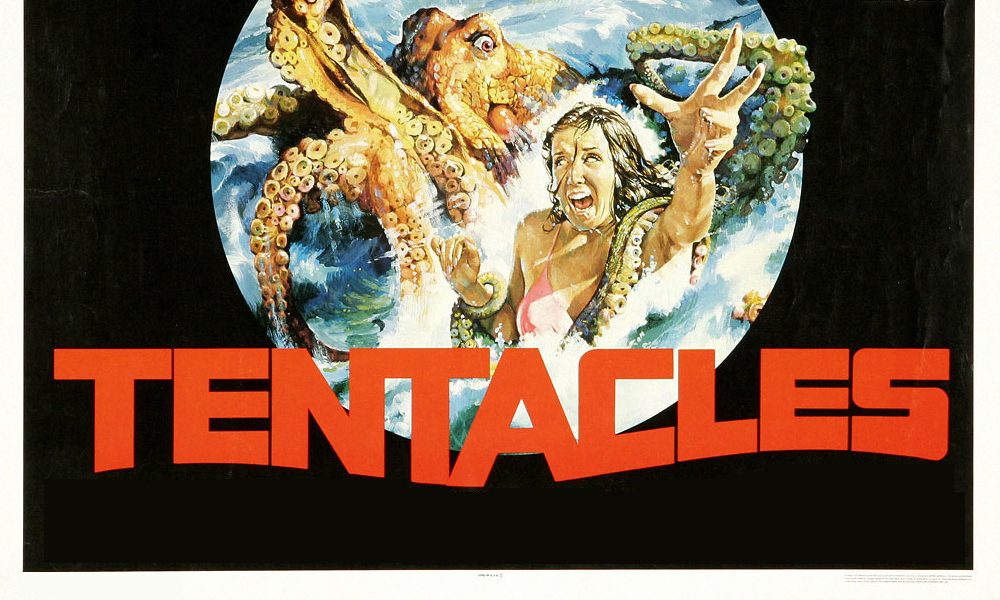 Shout Factory’s horror division, Scream Factory, has packed two forgotten films together for a fun double feature. Here we have one studio’s answer to Jaws (1975) and one countries answers to Godzilla (1954). 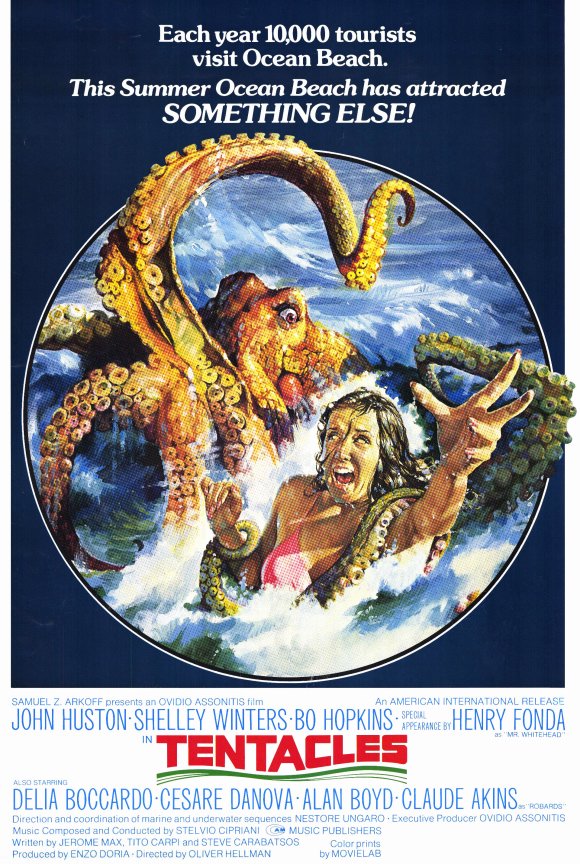 If you had a fear of the water because of Steven Spielberg’s Jaws, you got over it quickly while sitting through Tentacles. The film opens with two completely unrelated deaths that have the police baffled. Ned Turner, played by the legendary John Huston, is a reporter who is doing a lot more detecting than the police officers involved. As it turns out, Mr. Whitehead, President of Trojan Construction (played the legendary Henry Fonda), is constructing some new tunnels in the nearby sea bed. This construction is using a lot of technology that “Buck Rogers wouldn’t understand”. When confronted that his business may be responsible, he pleads innocent to Ned Turner. Thus begins the mystery of who and what is responsible for these strange deaths.

Thankfully, as the audience, we are privy to the “what”. A large Octopus is wrecking havoc under the sea, as well as the marina. Enter the Hooper character from Jaws, Will Gleason, played by Bo Hopkins. Gleason is a kid from the wrong side of the tracks who got his life right by becoming one of the world’s leading oceanographers. There is no reason why you should know that. After all, it really has nothing to do with this story, but then much of this film doesn’t. This is the main reason why you’ve probably never heard of Tentacles.

The film is packed with extemporaneous details, backstories, characters and subplots that really have no pay-off. Each one of the characters mentioned above could have had their own movie. They are connected with a few scenes, but they never really get together to stop the giant Octopus. Fonda plays the bad guy, sort of. Hopkins is a bit of an Earthy hippie scientist who loses the most loved ones in the film, yet you feel nothing for him. Houston disappears from the third act completely.

A film such as Tentacles is really only good for two things. First, the trailer should be played at intermission during a horror marathon for those too tired to get up. They will get a good laugh and be rejuvenated for the next film. Secondly, the poster should be hung up in TGI Fridays, because it is a true conversation piece that Fonda and Huston were in such a horrible film together.

While mining near the Arctic Circle for copper, a large piece of reptile flesh is discovered in the ground. The piece is frozen and taken back to Copenhagen for study, while United States Military sends in their best general to keep a watchful eye on the scientists. What should happen next is a fun giant monster movie. What we get is Reptilicus.

Many of the cliches from this time and genre are present in Reptilicus. Sadly, they never get used. This is odd because director Sidney W. Pink, just two years prior, gave the world The Angry Red Planet, which is a hallmark in both the Sci-Fi and giant monster genres. Many of the female characters are simply here as eye candy and really nothing else. The old scientists have numerous daughters for the young scientists and military men, but they never do anything with them. The ladies of Reptilicus don’t even get into any danger.

What there is in Reptilicus is a huge scenic tour of Copenhagen, which really does distract from the plot as we wait and wait for Reptilicus to emerge. Where Reptilicus falters is in the creature’s defense. Reptilicus evolves from a severed limb. It grows a head, arms, and even wings all from a piece of tail. This is all explained early on in a press conference with the most idiotic and simplistic explanation, which is what is supposed to happen in a film like this. Where the dilemma stems from is how to take care of Reptilicus. They can’t blow it up or it will only spread and grow more Reptilici. Burning it has no effect. As clever as this was for the creature, the writers backed themselves into a corner leaving the plot to meander into boredom.

You’ll watch Reptilicus for the fun of the atomic age movie monster. What you will get is a dull lizard movie with noticeable dubbing and a collection of people who truly deserve to die. You’ll appreciate the same extras running by the camera smiling, but this gaff is not nearly enough to make Reptilicus watchable.

If you want to take your own chances on the Tentacles / Reptilicus Double Feature, order it here.