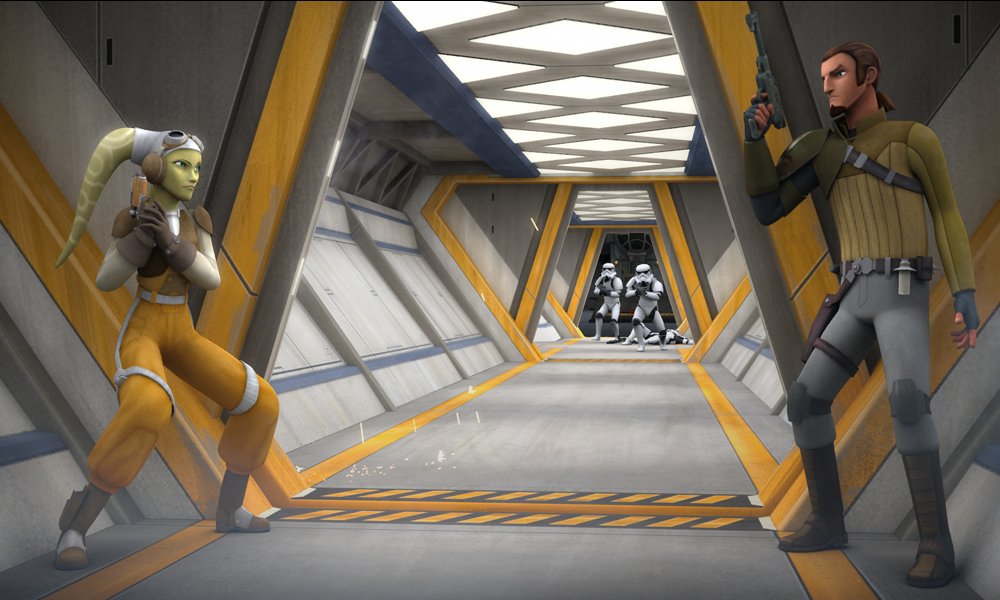 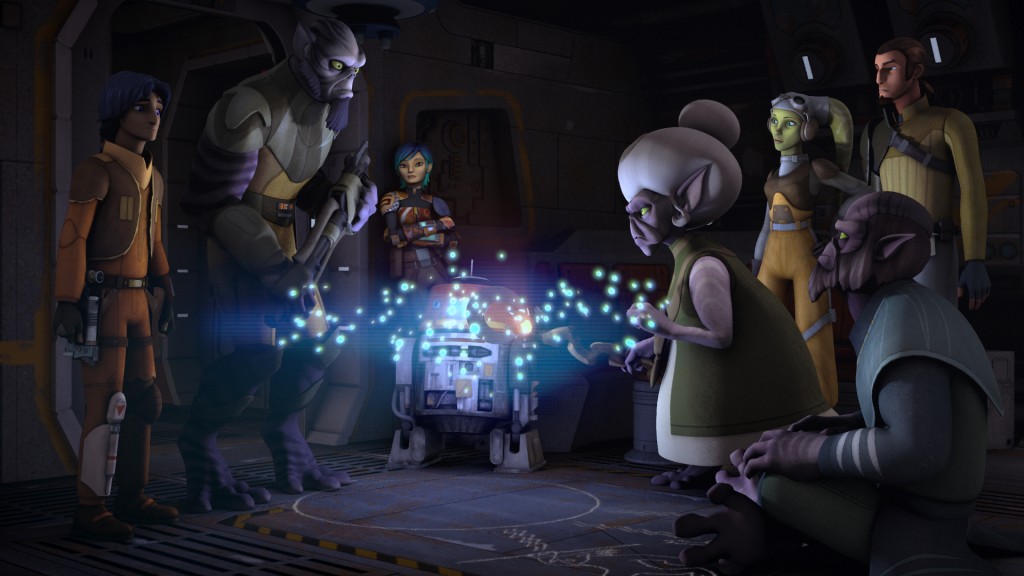 After weeks of flushing out the characters of Hera (Vanessa Marshall), Sabine (Tiya Sircar), and Ezra (Taylor Gray), we finally get something for Zeb (Steven Blum). What we knew of Zeb was that he served in the honor guard on his home world of Lasan and that most of his people have been killed by the Empire. There were hints of a history between him and Agent Kallus (David Oyelowo), but that has yet to be revealed. This week, due to Ezra’s dealing with smuggler Hondo Ohnaka (Jim Cummings), the crew of The Ghost helps some refugees escape the Empire. Those refugees turn out to be Lasat, just like Zeb.

We don’t waste much time in learning that these two older members of Zeb’s race have given up fighting. Both Chava (Grey Griffin) and Iron (Gary Anthony Williams) believe that fighting is what caused the downfall of their people. When Chava speaks of a prophecy about a child, a fool, and a warrior that will lead them to a new home, Zeb just rolls his eyes. Chava speaks of her own people’s beliefs and of a binding energy in the universe. Ezra thinks that sounds like the force and Kanan (Freddie Prinze Jr.) then informs him that the Force is known by many names.

“Legends of the Lasat” accomplishes two things this week. The first and most important is it shines light on Zeb’s character. We learn how Lasan fell and about his own personal outcome due to that event. Zeb is disillusioned with his own people’s beliefs and here he has to come to terms with which part of their prophecy he has to fulfill. Not to spoil anything, but it is not the one he wants. The second part of “Legends of the Lasat”, that is pure Star Wars, is the blending of beliefs. When George Lucas created this universe he borrowed from numerous cultures and civilizations to create the mythology we love so much. When Kanan said the Force goes by many names, prompting both him and Ezra to join in the Lasts’ ritual, I hoped that the younger members of the audience understood that moment. We each have our unique beliefs, but essentially we are all one. It was such a simple moment to have in a cartoon, yet so incredibly profound.

“Legends of the Lasat” also featured something we rarely see in the Star Wars universe, venturing into “wild space”. Dave Filoni and his team revealed to us an imploded star, which created some spectacular visuals. The star was also a first for Star Wars. Yet at that very same moment, the Star Wars Rebels creative team took it all back to what Lucas did in A New Hope. Zeb had to have faith in himself and what he believed in to make a difference. Again, it wasn’t about technology, but believing in one’s inner self. Yes, Star Wars is in the right hands.

One final thought: Kevin Kiner does an incredible job with shaping the music of John Williams to fit into this animated series. From time to time, I have noticed that it is not completely Star Wars music that inspires Kiner for this series. “Wings of the Master (see review) clearly came from Disney’s own The Rocketeer and this week, Kiner found inspiration in Clint Mansell’s The Fountain score. The music and the mood fit the episode and visuals perfectly. Just one more thing that makes this series incredible.

Rebels Recon #2.13: Inside “Legends of the Lasat” | Star Wars Rebels