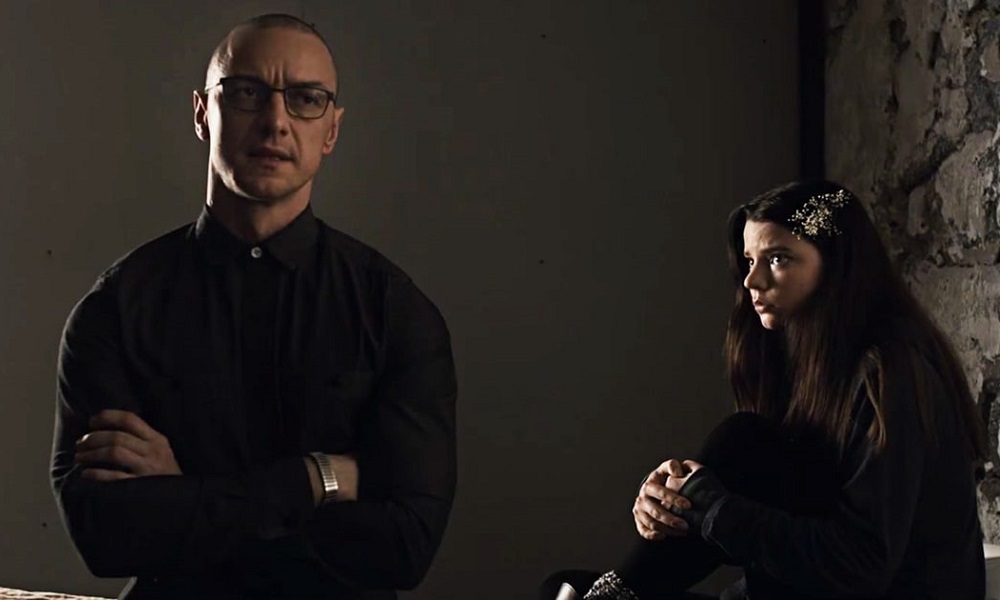 A colleague referred to Split less as a movie as a cry for help, and while I wouldn’t go nearly that far, it’s certainly what we’ve come to expect from M. Night Shyamalan. Having scored a minor but notable win with The Visit, he now fully abandons his previous tendency of making already dodgy big-budget projects unwatchable trash fires, and returns to the Twilight Zone vibes that made him such a big deal in the first place. As always, that proves a doubled-edged sword, and while parts of it are fantastic, they ultimately can’t overcome the problems that have bedeviled so many of his previous films.

Yeah, there’s a twist. And it’s stupid. More than stupid: presumptuous, self-indulgent, dying the death of a thousand logical leaps that just don’t make any damn sense. I can’t go any further because no-spoilers-or-you-die, but even for a director whose would-be surprises made his name (for better or worse), this one pushes the limits of the acceptable.

It compounds the other flaws you’ve come to know as well. Plot threads remain dangerously unsecured, flying apart at a moment’s notice, and getting from Point A to Point B involves enough copious hand waving to make you dizzy. It all feels supremely unnecessary considering the task at hand, and considering the talent he’s assembled to pull it off.

And therein lie the better angels of Split’s divided nature. For as frustrating as he can be as a screenwriter, Shyamalan remains one of the greatest pure technical directors working today. He assembles an elegant, frightening puzzle box for his characters to play in, and whenever he drops the pretense and focuses on the immediacy of the moment, Split genuinely blows your socks off.

He shares at least some credit for that with stars James McAvoy and Anya Taylor-Joy, as predator and prey specifically. McAvoys unhinged antagonist kidnaps a trio of girls from a Philadelphia mall and imprisons them in a windowless (and quite ominous) complex. Turns out, he houses 23 unique personalities in his slight frame: some benign, some malicious, but all of them apprehensively speaking of a 24th named “The Beast” slouching towards the Bethlehem of his noggin to be born. Taylor-Joy’s girl – the strongest of the three and with some trauma of her own to overcome – has to think her way out of the maze before that happens.

On that level, the film works brilliantly. The material could easily give way to scenery-chewing, and yet McAvoy (who isn’t afraid to go completely bananas if the role calls for it) delivers a master class on how to pull a stunt like this off. We see the shift from personality to personality in small, subtle ways, and no matter how contrived the character becomes, the actor convinces you to believe with effortless ease. Taylor-Joy, for her part, continues the great streak she began with The Witch with subtleties of her own, making a winning heroine to match wits with this ever-changing hydra.

And had Shyamalan kept things simple, he might have added quite a feather to his cap. He continues to display an uncanny knack for visual storytelling, for establishing space, and for heightening our anxieties in countless subtle, merciless ways. It’s rare to see such pure skill on display in January, and with a stellar cast (the man has always had a magic touch with actors), it holds plenty to occupy your attention.

But then, like it has so many times before, undue presumption overturns the apple cart. Split keeps the worst of more or less in check for the first two acts, but with Betty Buckley’s fretting psychologist lurking about, uttering ominous gibberish about human potential and keys to the soul, you can feel the losing battle the film’s better elements are fighting. When it goes wrong, it goes very wrong, and while that’s not enough to overwhelm the movie’s better elements, it definitely leaves the wrong emotions as you exit the theater.

Your mileage may vary, of course, and certainly Split makes no bones about its content. We know what to expect from M. Night’s Wild Ride by now, and even at its worst, the movie couldn’t be mistaken for anyone else’s. But the film’s ultimate promises (which again, I must stay quiet about) lead to more dread than elation, and the final impression suggests a director leaning on a crutch more than returning to form. In some ways, it delivers more than we should expect for January, but that’s never been good enough for this filmmaker, and the moment he ventures beyond the simplest of joys, the whole thing falls to pieces. You can find your share of entertainment here, but the price it exacts is brutal indeed. Fairly warned thee be, says I.