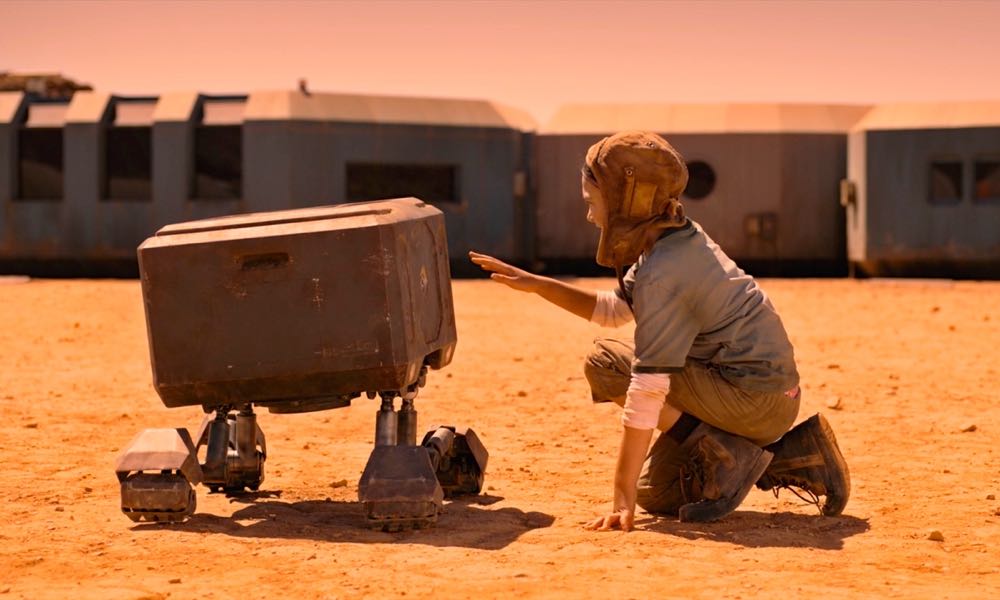 The first thing you should know about Settlers is that it’s atypical for what has become the norm for modern science fiction movies these days. There’s no gunplay or staggering body count, no explosions or pyrotechnics, or even the slightest suggestion of CGI. This is not an action thriller in any way. Instead, what you get is a quiet slow-paced tale about early settlers and what befalls them on a small homestead in the middle of nowhere on what looks like mostly rocky, barren, and unfriendly terrain. What makes this movie science fiction is that all this stuff takes place on the surface of Mars shortly after humans have migrated there. In fact, Settlers does not much resemble a science fiction movie at all; it is much more reminiscent of a western, a slow-paced western ar that Not a western with lots of gunfights or showdowns. This is much quieter stuff, and for that reason, it may not appeal much to most genre fans in general. As the film begins, it paints an idyllic portrait of a small family’s quiet life away from the rat race of human activity and all that infers.

It’s not long before the film’s narrative not too subtly reminds us that the most dangerous thing we are likely to encounter in our attempt to spread across the solar system and universe is other people. And that you had better be prepared to defend yourself against those that want to take what you have worked to build in life. It’s not long before the film introduces people willing to accomplish that goal by any means necessary. Settlers does not waste any time reminding us that as long as there are other people around, we never truly escape the law of the jungle, even on Mars. The film’s narrative centers around a young girl that is part of this family and how she grows into a woman in the shadow of tragedy and death, in the form of the man that killed both of her parents. Settlers seems to have a message about strength and how it comes in all forms. Her only friend is a little robot that seems attracted to her for unknown reasons. There’s also an element meant to be surprising (that I saw coming) about friendship and kindness possibly paying off unforeseen benefits in the future.

The film plays softball in its treatment of violence, sex, and how the usurper treats the film’s main protagonist; I mean, Settlers does not even hint at rape or sex-slave stuff until near the end. There’s no nudity, and all the sex and violence stuff, what little there is, mostly takes place off-screen and is only implied.

Not familiar with this title? Settlers is a 2021 British science fiction thriller film written and directed by Wyatt Rockefeller. The film oddly enough depicts the young woman finally leaving the scene of so much tragedy, the homestead where she has lived all of her life, in search of others? The film closes in a somewhat ambiguous and open-ended conclusion, possibly meant to set up a sequel or remind us that human beings can never entirely escape our anthropology, even on Mars.