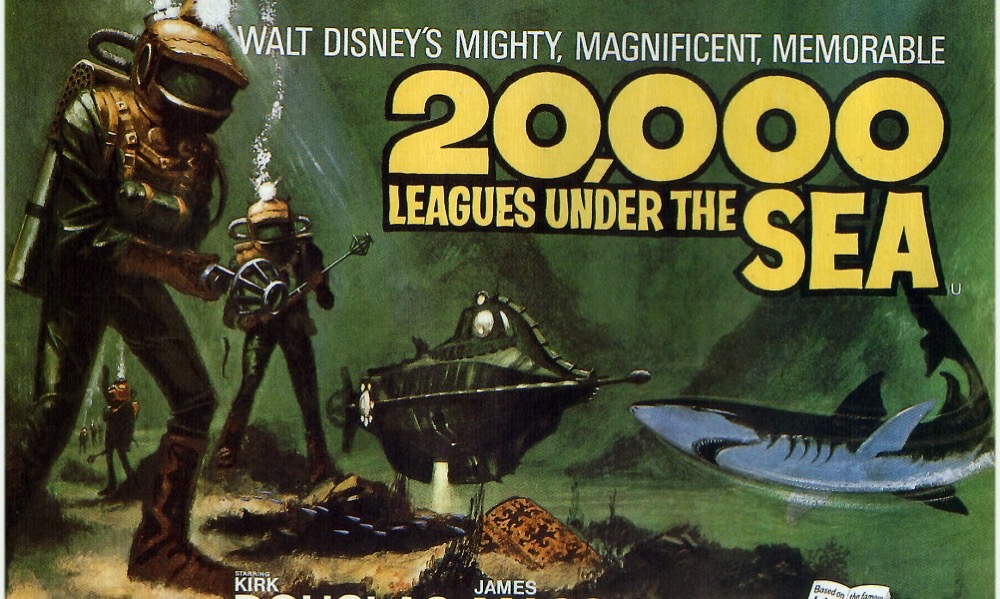 The Primal call of the sea is fundamental to the human psyche. From Greek mythology, the legends of Atlantis, to Voyage To The Bottom Of The Sea, and Seaquest DSV, its difficult to understand why there has not been more in the way of underseas adventures done in movies and on tv.

Few works of fiction, and wonders of the world captivate like the mystery of the seas, and the hidden secrets it holds. Even today with the sophisticated technology available to us, we have barley scratched the surface when it comes to exploring the vast oceans of our planet, which from time to time still manage to offer up some surprises to scientific inquiry. Verne was smart enough to tap into this primal appeal in his adventure tale about Nemo and the Nautilus

Still considered one of Verne’s best works from the time when it was first serialized  from March 1869 through June 1870 in Pierre-Jules Hetzel’s periodical, the Magasin d’Éducation et de Récréation. The deluxe illustrated edition, published by Hetzel in November 1871, included 111 illustrations by Alphonse de Neuville and Édouard Riou. The description of Nemo’s ship, called the Nautilus, was considered ahead of its time, as it accurately describes features on submarines, which at the time were very primitive vessels. This makes it stand out in comparison to Verne’s other works, which are less scientifically accurate, and serve more as simply adventure stories.

The title refers to the distance traveled while under the sea not the depth achieved. The novel was originally set in the time period in which it was written, but since its creation has spawned several versions of the seminal story, some of which set the story in more modern times.

Most people are familiar with the story and how it begins. During the year 1866, ships of several nations spot a mysterious sea monster, which some suggest to be a giant narwhal. The United States government assembles an expedition in New York City to find and destroy the monster. Professor Pierre Aronnax, a French marine biologist and narrator of the story, who happens to be in New York at the time, receives a last-minute invitation to join the expedition which he accepts. Canadian whaler and master harpoonist Ned Land and Aronnax’s faithful servant Conseil are also brought aboard. The rest is history as the ship is destroyed by the “monster” and the survivors eventually are introduced to Nemo and the Nautilus.

The Disneyfied version changes the enigmatic, and mysterious self-exiled Nemo into a European whereas originally he is Asian Indian, but other than the whitewashing of the main character, does not meddle with it much. The film throws in a couple of songs in keeping with their traditional formula for family entertainment in the 50’s. One thing that does not change is Nemo’s motives of being in search of scientific knowledge, and for revenge upon civilization for experiences he suffered earlier that led to the death of his wife and child. He has also traditionally been portrayed as wanting to put an end to war.

This is a classic adventure film, and the film has an all-star cast and along with several other movies done in the fifties and sixties gave birth to what would later become known as blockbusters. The cast included some of the biggest, most popular stars of the period: Kirk Douglas, James Mason, Peter Lorre,and Paul Lukas. It relied upon the star power to bolster ticket sales beyond the film’s promise of adventures and thrills.

Of course the real star of the movie is the submarine Nautilus and its prototypical steampunk styling, designed to capture the imaginations of both young and old, it is probably one of the most iconic and recognizable artistic genre objects in the history of science fiction movies. The film is famous for its fifties style special effects portraying underwater scenes and, of course, the fight with the legendary giant squid.

From a time when a lot of movies were based on literary classics this is a classic adventure story that has withstood the test of time and a film classic among classics.

X-Men director Bryan Singer has plans to do a remake based on a script he has written as his next film.