Gotham Review: All Will Be Judged 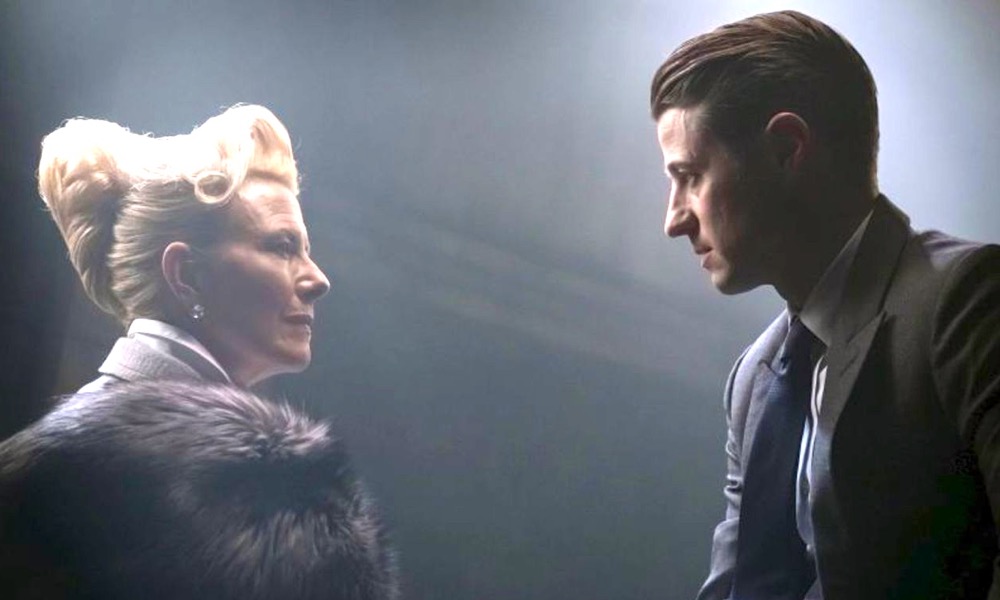 All Will Be Judged could also have been titled Season 3’s Greatest Hits, because it featured the season’s highlights in episodic form.

In fact, it tiptoed close to being a clip show by highlighting all of this season’s main ingredients that led us to this point. The main focus of the episode was the former Captain Barnes in his new persona as the Executioner, but it also focused on Kathryn and The Court, as well as Jervis Tetch and his deadly virus which got a lot of this stuff rolling at the beginning of the season. Lee is still hanging around despite her saying she was leaving several episodes back and we still have the animosity between Oswald and Nygma just in case we need to be reminded about that. Bruce and the Shaman relationship is still being dwelt on without revealing what the older man’s end game is, along with Selena’s determination to get back at Faux Bruce.

Not that weren’t some delightful moments that were worth watching this time around – there were, and by the end of the episode it almost seemed as if the show had turned in an episode that wasn’t just more rehashed stuff from earlier in the year. Almost.

Here’s a recap with some comments (Warning, spoilers follow*)

The Executioner (Michael Chiklis) is on a roll, he’s awfully spry for man his size, along with having that enhanced strength he’s a handful that seems more than a match for the GCPD. He’s still talking too much and saying the same things over and over again about everyone being judged, his new outfit doesn’t seem to even slow him down despite seeming to be an awfully awkward fashion choice, he has an ax covering his  his left hand, what if he forgets and goes to scratch an itch? Not to mention its laugh inducing at times, and someone should tell him to lighten up on the mascara.

He’s basically a thug  of the Court at this point and Kathryn (Leslie Hendrix) is never far behind this maniac, whose virus fueled behavior hasn’t shown any signs of slowing down. He does get spooked when a bunch of cops draw a bead on him, spurring him to leap from an upper story window to make his escape.She’s still really pissed off at Jim (Ben McKenzie) for betraying her trust, but what did she expect?

We pay a short visit with Oswald (Robin Lord Taylor) and Nygma (Cory Michael Smith) before moving on to Wayne Manor where Selena (Camren Bicondova) has arrived to carry out her revenge on faux Bruce (David Mazouz) for throwing her out off that window. She gets the jump on him, but his speedy reflexes save him momentarily. She manages to get in  a good stab in his side with her pocket knife, but because he feels no pain it doesn’t even phase him.

Their brawl draws Alfred’s (Sean Pertwee) attention and Selena spills the beans telling him that Bruce has been replaced, and Alfred noticing the stab wound realizes its true. Faux Bruce manages to take them both down before making his escape. Alfred is knocked out but now has a single minded mission in life, rescue master Bruce. Its somewhat of a puzzle regarding Selena’s unimpaired mobility nd ability to engage in rough stuff, considering her recent fall, she apparently just needed to sleep it off for a couple of days nd she’s all better. Ah, to be young again.

After they recover from being knocked out Alfred tries to enlist Selena to help him find Bruce but she refuses and he tells her off, she tries to act unaffected by his word s, but tits obvious some of it got through her thick skin. Bruce and the Shaman are shown arriving back in Gotham right after that.

Lee (Morena Baccarin) is seen talking with Tetch (Benedict Samuel) and asks him why he infected Mario instead of Jim or her and he explains that he was playing her to get at Jim .  She now knows Jim was telling the truth about killing Mario, but the truth has an unexpected effect pushing her into an even darker place.

Jim and Harvey (Donal Logue) manage to track down the locations of the Court’s secret hideouts using the map hidden in the crystal owl which they manage to repair. They check one place out, and are attacked by the Executioner, Amusingly, Harvey ponders why the bad guys never have their hideouts in places he would like to visit  like a brewery or a strip club, The Executioner overpowers them and takes Jim captive to be judged as ordered by Kathryn.

Meanwhile Oswald and Nygma  come to an understanding that inoreder to escape they will need to work together and decide to call a temporary truce, and it works they escape and go their separate ways. The Shaman reveals he wants to train Bruce as another Talon to work for the Court, which makes little sense, they already had faux bruce who is stronger and feels no pain pretty much making him ideal for the job, all this trouble to put bruce to work for them as muscle? that seems like flawed reasoning on someone’s part.

So the executioner allows Jim to escape and in the meantime the GCPD captures kathryn and brings her in around the same time Alfred shows put o tell Jim Bruce has been abducted. Jim is interrogating Kathryn trying to find out where the virus bomb is hidden and Alfred gets wind that she in the building. Alfred getsnin her face and when she refuses totally he pulls  huge knife and stabs her in the hand pinning it to a table. Good old Alfred doesn’t stand on proper behavior when when master Bruce’s life is involved.

At the same time the Executioner shows up with  another full-fledged in vision of GCPD headquarters, yes anther one, and he succeeds in taking ll the cops present down, The Jim, Harvey and Alfred trytongetnaway with Kathryn he can be heard talking too much again about justice, and blah, blah, blah,  he suddenly descends from the ceiling somehow literally getting the drop on them. like  chubby Spider man in a leather suit, at which not  my suspense of disbelief ws abruptly terminated and I watched d the screen with a giggle on the tip of my tongue.

The maniac is going on and on about his crusade to clean up the city when Kathryn makes the mistake of interrupting the ensuing fight and starts making sounds like a demanding shrew. She should have known better, no man is going to respond well to that, especially if he’s a well established maniac. He chops off her head with his ax-hand . Jim somehow gets his hands on a shotgun and blows the Executioner’s arm off above the wrist, abruptly ending the crazed ex-captain’s  short lived crusade.

Following this Jim encounters leee who has one last bitter rant before she goes and she is shown after that injecting herself  with ketch’s virus and her eyes show its immediate feet n her and she smiles. Wo if you think she was loose canon before, just wait until next week.

Allin all not a bad episode it had some good moments, one of which saw the end of Kathryn as the face of the Court and leaving the city still under the threat of the virus bomb. Another episode in service ot the rapidly approaching season finale which is tarting to look like it will be a doozy.