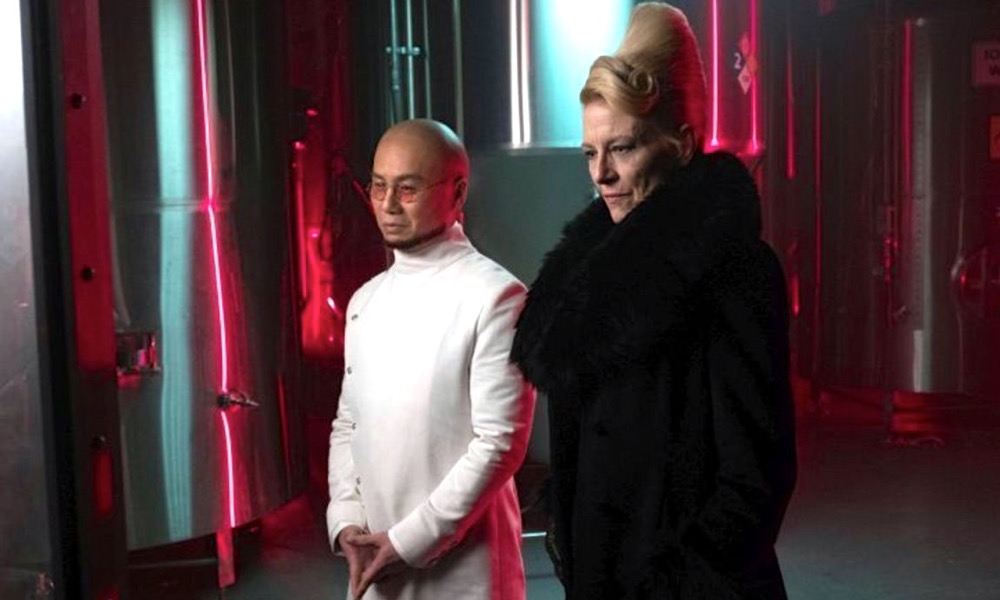 Another eventful episode in service to the season finale, irony plays a big role this time around.

Light The Wick was another great episode of the series, events are obviously designed to put things in place for the season finale, which means things are getting crazier the closer we get. More familiar faces emerged from last season, brought in from the wings to play their part in things and make sure that the narrative gets appropriately heated up in preparation for the big event.

The Court Of Owls is still center stage in recent developments, and their deadly plans for the city have been brought sharply into focus. It seems they no longer deserve the title of a secret organization since everyone now seems to know of their existence now, at least in vague terms, and everyone wants to know more about them. It all added up to the sort of well-cooked stew of suspense, action, and mystery this series excels at, chock full of villains, some of whom end up helping out on the side of justice despite themselves.

We start out at Arkham Asylum with Ex-chief Barnes (Michael Chiklis), still bat-shit crazy, being transferred to another location. He manages to get the upper hand on his escorts and is doing a pretty good job of ending their careers when a shadowy figure descends on them and inoculates the berserk Barnes with an unknown substance. Tetch (Benedict Samuel) himself witnesses all this with glee.

It seems the Court of Owls has taken an interest in him because the figure turns out to be Talon, or maybe I should say another Talon. It has never been made entirely clear, but there seems to be at least a few of these masked guys that answer to that title. It well may be there’s an entire squad of these guys that serve the Court, at least its starting to look that way.

Anyway, Barnes, who has a new slogan along the lines of being the executioner for all bad guys, (he keeps saying the word executioner, just so we know that’s what he is going to be called from now on) is now a captive of the Court, that wants him so they can harvest some of Tetch’s crazy-inducing virus, because the virus plays a role in their plans to purge Gotham of evil doers and push the reset button on the city. An oddly pleasant surprise entrance by Hugo Strange (BD Wong), completes the idea they are up to their old tricks and once again employing him to carry out their despicable agenda.

The scene switches across town where Ivy (Maggie Geha) is asking about Selena (Camren Bicondova) at the Vixens nightclub, and Tabitha (Jessica Lucas) fills her in on the 411 about Selena’s fall and that she’s in the hospital. Ivy pays her a visit and the prognosis is not good; she’s in a coma and may not come out of it. Ivy uses her ability to get people to cooperate and determines to take matters in hand and use her plant knowledge to heal Selena herself. She fills her hospital room with plants and sits in an around the clock vigil in order to help her friend.

Eventually, it works, and Selena wakes up and immediately gets ready to leave saying she is going to Wayne Manor to kill someone, and we all know who that is, Bruce’s doppelgänger is the target of her ire for obvious reasons. Selena is on a mission.

We pay a visit to the mountain hideaway where the real Bruce (David Mazouz) is still being lectured and taught valuable lessons by the Shaman (Raymond J Barry) Bruce is sparring with another masked man who is beating him soundly repeatedly until the Shaman intervenes and teaches him he needs to lose his rage and fight with a cooler head, and miraculously Bruce suddenly improves enough to defeat his opponent.

He was told he could leave if he defeated him, but when the time comes he chooses to stay. I’m not sure if I am fully on board with this new version of how Bruce picks up his fighting skills, but there you have it. They are rewriting his mythology again and I am still annoyed that all the recent versions of Bruce Wayne bypass his original legend of being a scientist turned vigilante.

Jim (Ben McKenzie) is hanging around the Court of Owls and trying to find out heir secret plans and when he exits he is confronted by Penguin (Robin Lord Taylor) who has Firefly (Camila Perez) along for back up. Penguin is still hot to find Nygma (Cory Michael Smith) and threatens Jim to tell him all he knows about his whereabouts, and what’s going on and he wants to know about this secret organization he’s heard about. Like I  said, the word’s gotten out about the Court.

Meanwhile, Jim is doing his best to find out the Court’s secret plans to do Gotham harm and pushes his luck trying to find out what he can by sneaking around and even committing a B&E on one of the Court’s swank locations. He nearly gets busted in the act and tells Kathryn (Leslie Hendrix) about Penguin being still alive to distract her.

He finds a Wayne Industries ID card that gives him a clue where to look and he and Bullock (Donal Logue) pay the place a visit where they find bloody bodies everywhere. A Tetch infected lunatic gets the drop on them and nearly ends Jim’s career right there until Hugo  Strange intervenes and saves his life. Strange is ready and willing to sell out the Court and their plans and even has a folder full of stuff that will send them all to prison which he hands over willingly.Bullock delivers one of the oddest lines of dialogue I have ever heard when he responds to Sturges way of thinking when he calls the mad scientist ‘You logical bastard!’  Strange indeed.

Still not satisfied, Jim wants to know more, and he gets a call from Kathryn telling him she will reveal all. He meets her at the appointed location and winds up in a room overlooking a party going on in an improvised ballroom below. Kathryn demonstrates an aerosol device which will fill the room below with a vaporized form of the deadly virus, she sets the device to go off in fifteen minutes and leaves Jim with another Talon to guard him while he sees the people below get exposed to the stuff.

Desperate, Jim manages to secretly call Penguin to let him know where he is and that there’s not much time before its too late. Jim finally resorts to attacking his guard who begins kicking his ass pretty good when Penguin arrives with Firefly who sets Talon on fire and sends him crashing through some windows into the room below. It’s all just in the nick of time of course and Jim leaves for other parts. Penguin lingers and gets taken prisoner by yet another Talon and he finds himself locked in a steel cage.

He’s not alone in there, and he hears a voice he recognizes, Its Nygma in the cell next to his just out of reach and they glare at each other, Nygma is very surprised to see him alive, and Penguin looks like he wants to get all stabby again. Looking forward to next week to see what happens next.