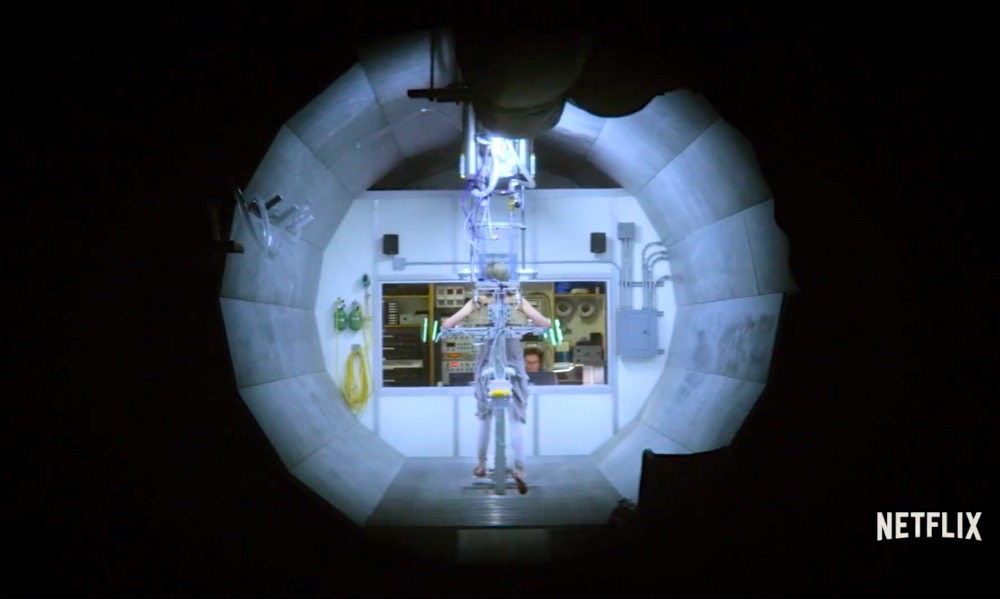 The OA is unlike anything i have ever seen on TV before, some might compare it to Lost, and it does have some of the flavor of that series, But the OA is weirder, much weirder and weird is good.

Its hard to describe The OA, Its weird, but I didn’t get the sense it was weirdness done for the sake of being weirdness, there was method to this madness. It has a lot of elements that seem to combine, at first, to make it seem primarily a surreal journey that quickly develops into one of the best examples of the seductive power of good storytelling I can remember.

It seems at times like a some sort of new age spiritual parable, and at others  a strange sort of science fiction story. One thing is for certain, its thoroughly engaging, it grabs a hold of you and doesn’t let go until its done. Because of the way it reveals the layers of itself it feels more like one long movie more that a series of episodes, a very engaging movie that worms its way into your brain leaving you with a need to know what happens next and where the story is leading to in its journey. Its a great story.

The OA is an American mystery drama web television series with science fiction, supernatural and fantasy elements, which debuted on Netflix on December 16, 2016. Created and executive produced by Brit Marling and Zal Batmanglij, the series is their third collaboration. The series consists of eight episodes, all directed by Batmanglij, and is produced by Plan B Entertainment and Anonymous Content.

In the series, Marling stars as a young woman named Prairie Johnson who resurfaces after having been missing for seven years. Prairie now calls herself “The OA” and can see, despite having been blind before her disappearance. This creates a sensation when  this becomes general knowledge and she becomes known as the miracle girl. Adding to the mystery is she won’t tell where she’s been, what happened to her, or how her sight was restored. This endows her with a certain celebrity and much more attention than she or her adoptive parents care for. Her reappearance causes quite a stir

As the story develops the OA seemingly  and arbitrarily instead quickly assembles a team of five locals to whom she reveals that information, also explaining her background story. Finally, she asks for their help to save some other missing people who she claims are currently in the same situation she has described to them. The ensemble cast is great in this.

They begin having clandestine get togethers where she begins spinning a  fantastical story with elements of spiritual  and supernatural  themes that employs some Jungian archetypes regarding her life and experiences. Her story begins to have a mesmerizing effect on her audience and she becomes a catalyst for change in their lives, almost as if she is weaving a spell on them.

Meanwhile others in the small town where she lives perceive her as a threat, and a possibly dangerously psychotic, including her adoptive mother, and the way the story is depicted its not certain what the truth of the situation is. This one keeps you guessing what’s really going on for most of its duration.

As the story continues to develop we learn about a meeting that takes place when she meets HAP,  Dr. Hunter Hap who is conducting experiments on people who have had NDE’s – near death experiences, as she claims to have had when she was little girl. She ends up a captive in his cellar which he has designed for that purpose  to imprison the subjects of his experiments who he has abducted. HAP is a sociopath obsessed with life after death and he employs his medical knowledge to kill his subjects and then bring them back from the brink in order to chronicle and record their experiences.

Another aspect of this situation is the OA, acting on visions and dreams involving angels she has, begins developing as system of movements she convinces her fellow prisoners will allow them to escape through mystical means, and they begin rehearsing these moments that are portrayed to closely resemble the movements of modern jazz dance, which alternates between seeming silly and strangely ominous at the same time. This is when she reveals  her new name, The OA, when she is told by one of her visions that  she is the Original Angel.

The series tells a multitude of stories as it winds its way towards its conclusion, spending time to more fully develop details of its characters lives. there are portrayals of sex and violence, gentleness, and compassion included in its compass. It touches on nearly every aspect of the human condition in its journey.

The story ends with a very surprising twist, which I am not going to spoil. I will go as far as  to say in my opinion its worth it just see how it ends. I have little doubt that once you get started on it, The OA will pull you in to the end as easily as it did me.

As she is about to reveal the ending of her story,  the OA is interrupted by the towns people that perceive her as a threat. It has the same effect as having a splash of cold water unexpectedly hitting your face. It really surprised me to realize just how caught up in the narrative I was when it happened. Imagine being  in a forest where you see that fairies, elves, and other magical creatures really do exist, only to have someone in an ATV suddenly disturb that magical moment with their raucous vehicle. That is what it was like. it completely shatters the magic of the moment and I resented its abrupt arrival. Its almost like it makes the magic evaporate because the sudden racket entirely erases the experience to the point you begin to wonder if it even happened just a moment later.

There are some that will respond to this series as being  pure BS and a ridiculous waste of time. I was delighted by it as an example of the power of great story telling and how, despite all of our so-called progress, we are just as susceptible to it as we were when it took place around the village fire at night back in the days before electric lighting and indoor plumbing. It was a revelatory experience, and i didn’t even mind being manipulated by the production’s clever creators.