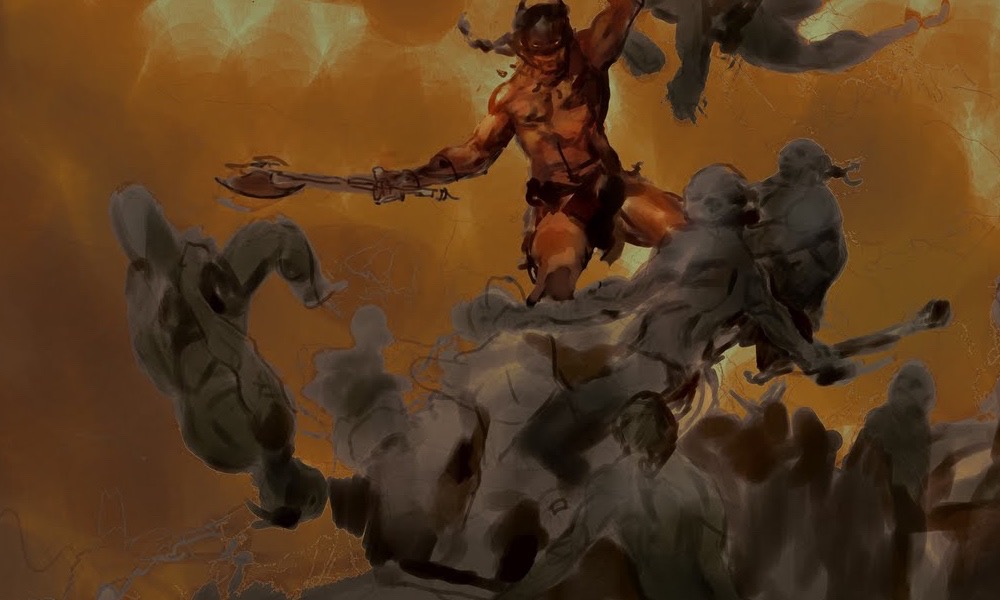 Few artists enjoy the status of Frank Frazetta as a master of illustration, and this is as close as we will get to see his memorable, sensual work brought to life in animated form.

It is puzzling how this film has fallen into near obscurity. Co-produced by the master himself it is an entertaining tribute to his work in a story that portrays a classic conflict between good and evil.

The story includes all the classic elements found in stories of this sort, an adventurer, caught up in a conflict between an evil sorcerer and a warrior bent on revenge that even includes a beautiful princess filling the role of a damsel in distress.

The animated feature, based on characters Bakshi and Frazetta co-created, was made using the process of rotoscoping, in which scenes were shot in live action and then traced onto animation cels. The depictions of the characters in the film are predominately done in a style of simple line drawings similar to comic books,  but still manage to capture Frazejtta’s signature style. The results are a film that resembles, in some ways, the tv series Jonny Quest.

Frazetta is of course one of America’s most renowned illustrators well known for his work which appears on  comic books, paperback book covers, paintings, posters, LP record album covers and other media. Frazetta’s style is easily recognized and known for its sensual characteristics and its almost magical ability that sometimes seems to bring the subject matter to life.

Ralph Bakshi is better known for unconventional animation productions. Films such as Wizards (1977), The Lord of the Rings (1978) for which he is probably best know for. Followed by American Pop (1981) and Fire and Ice (1983). In 1987, Bakshi returned to television work, producing the series Mighty Mouse: The New Adventures, which ran for two years. After a nine-year hiatus from feature films, he directed Cool World (1992), which was largely rewritten during production and received poor reviews. Bakshi returned to television with the live-action film Cool and the Crazy (1994) and the anthology series Spicy City (1997). He is recognized as having revolutionized  the animation industry by creating animated films meant for more mature audiences.

The screenplay for the film was written by Gerry Conway and Roy Thomas. The story is a simple one, it tells a fairy tale type story: From their stronghold in Icepeak, the evil Queen Juliana (Eileen O’Neill) and her son, Nekron (Stephen Mendel), send forth a wave of glaciers, forcing humanity to retreat south towards the equator. Nekron sends a delegation to King Jarol (Leo Gordon) in Firekeep to request his surrender, but this is a ruse orchestrated by Queen Juliana for Nekron’s sub-humans to kidnap Jarol’s daughter, Princess Teegra (Cynthia Leake); Queen Juliana feels that Nekron should take a bride to produce an heir.

But Teegra makes an escape and comes upon Larn (Randy Norton), a young warrior and the only survivor of a village razed by glaciers, who offers to escort her back to Firekeep. As Teegra is recaptured, Larn teams with the mysterious Darkwolf (Steve Sandor) to save Teegra and then travel to Icepeak to stop Juliana. Darkwolf faces Nekron and kills him as Icepeak succumbs to lava released by King Jarol and is destroyed. Evil is conquered, and Larn and Teegra are in love and live happily ever after.

Like I said, a fairy tale, complete with happy ending. Watching the film is  really more about seeing Frazetta’s work brought to life, and Teegra is really something to behold on screen. This is not your typical Disney princess, she is a full bodied woman in the habit of walking around wearing very little in the way of clothing. A real classic worth seeking out and giving a watch.