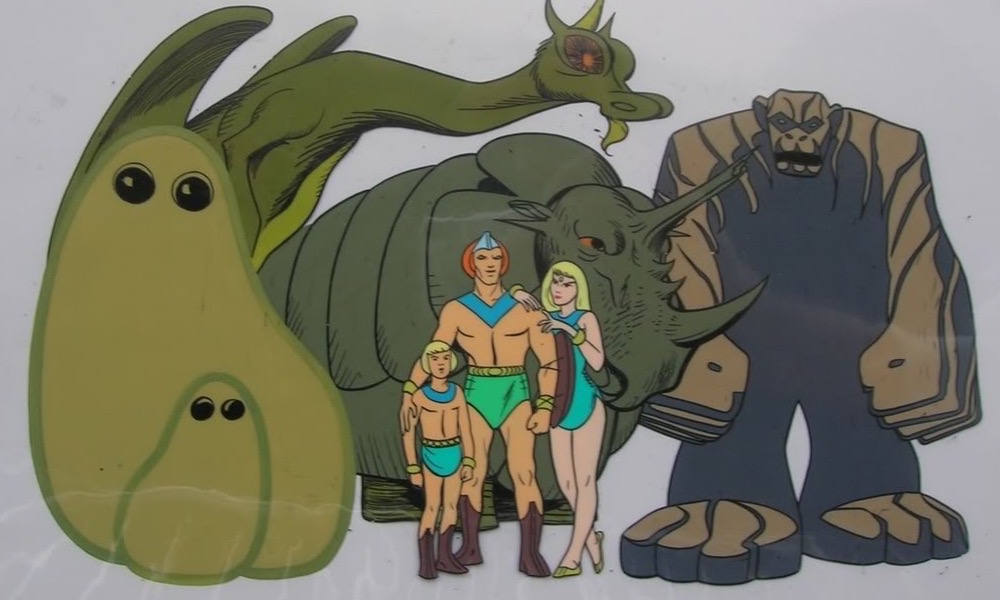 Once upon a time, in a galaxy far away known as Saturday morning, there was a regular sacred ritual that took place, a delightful series of shows based on genre concepts were broadcast for the amazement and entertainment of children everywhere.

No one played a bigger a role in this than the studios of Hanna-Barbera, and the history of how this came about is an interesting one. Their shows were a delightful blend of humor, action and adventure that were looked forward to with an almost religious fervor by millions of kids everywhere. During the 60’s the productions of this studio ruled the airwaves for a brief time each week with marvelous tales of fantasy and science fiction.

Hanna-Barbera was an American animation studio that dominated American television animation for three decades in the mid-to-late 20th century. It was founded in 1957 by former Metro-Goldwyn-Mayer animation directors William Hanna and Joseph Barbera (creators of Tom and Jerry) and live-action director George Sidney in partnership with Screen Gems, television arm of Columbia Pictures. Sold to Taft Broadcasting in late 1966, it spent the next two decades as its subsidiary. Hanna-Barbera was not only known for its variety of characters, but for building upon and popularizing the concepts and uses of limited animation.

Hanna-Barbera was one of the first studios to successfully produce cartoons especially for television. Previously, animated programming on television had consisted primarily of rebroadcasts of theatrical cartoons. Their first animated series for television was The Ruff & Reddy Show. At this point, several animation industry alumni, in particular former Warner Bros. Cartoons storymen Michael Maltese and Warren Foster, who became Hanna-Barbera’s new head writers, joined the staff at this time. By 1959, H-B Enterprises was reincorporated as Hanna-Barbera Productions, and was slowly becoming a leader in television animation production.

Of particual interest to genre fans are several classic series that were produced by the studio and became known as some of the greatest genre based cartoon series ever created. Among these shows are the notable classics

Jonny Quest – (also known as The Adventures of Jonny Quest) is still my all time favorite of the series mentioned here. It was unique and special for the time, and remains so to this day. The series about a boy, his companion Hadji, and his dog Bandit who, along with secret agent Race Bannon, accompanies his scientist father on extraordinary adventures.

It was produced by Hanna-Barbera Productions for Warner Bros. Television Distribution, and created and designed by comic book artist Doug Wildey. Wildey’s designs on Jonny Quest gave the series a distinctive look, which added to its allure. Inspired by radio serials and comics in the action-adventure genre, it featured more realistic art, characters, and stories than Hanna-Barbera’s previous cartoon programs.the show also had the coolest, best and most memorable theme song going.

The Herculoids – Also created and designed by Alex Toth, The show debuted on September 9, 1967 on CBS. Hanna-Barbera produced one season for the original airing of the show, although the original 18 episodes were rerun during the 1968–69 television season, with The Herculoids ending its run on September 6, 1969. This series is set on the distant planet Amzot

The Herculoids battled to defend their planet from menaces on Amzot/Quasar and from outer space. All of the Herculoids displayed Human-level intelligence—employing precision teamwork and complex tactics—as well as emotions, and Zandor and Tara both displayed a working knowledge of complex alien technologies as well as the ability to pilot interstellar spacecraft.

Essentially, Zandor, Tara, Dorno, and the Herculoids were all apparently fighting to keep Amzot/Quasar a technology-free, primitive planet. This is further indicated by the pseudo-barbarian outfits worn by the trio, and the fact that technology was used mainly by the various villains, but rarely if ever by the heroes.

Frankenstein, Jr. and the Impossibles – It premiered September 10, 1966 on CBS, and ran for two seasons. The program contained two segments, which each served as a middle ground between Hanna-Barbera’s traditional cartoon early output and its superhero-based late-1960s cartoons.

Frankenstein, Jr.: Taking place in Civic City, boy scientist Buzz Conroy (voiced by Dick Beals) and his father Professor Conroy (voiced by John Stephenson) fight supervillains with the aid of a powerful heroic robot named “Frankenstein Jr.” (voiced by Ted Cassidy). “Frankie”, as Buzz usually referred to him, was more than a little reminiscent of the title character in Gigantor. Buzz built “Frankie” and activated him through an energy ring.

The Impossibles: The title characters are a trio of superheroes (Multi Man, Fluid Man, and Coil Man) who pose undercover as a Beatlesesque rock music band. The characters’ names are descriptive of their powers: Multi-Man (voiced by Don Messick) can create identical copies of himself; Coil-Man (voiced by Hal Smith) can form into a super-springy coil; and Fluid-Man (voiced by Paul Frees) can transform his body into any fluid. The heroes receive assignments from “Big D” (also voiced by Frees), who contacts them via a receiver in the base of Coil-Man’s left-handed guitar. During the development of the show, this group was called “The Incredibles,” but was changed to “The Impossibles” by the time of production. The team’s pre-production name was later given to the superhero family from the Disney/Pixar movie of the same name.

Its almost impossible to measure the influence these marvelous early animated series had on my childhood and the fun I had watching them. These shows, and others like Birdman and the Galaxy Trio, from Hanna-Barbera were a must see part of my life back in those days. Of course, I had my favorites and some of them I liked less, but watched them anyway, because they were the only the game in town when it came to animated science fiction and fantasy shows on tv at the time. Jonny Quest ruled them all with the Herculoids, and Space Ghost coming in a close second in capturing my enthusiasm and imagination at the time. They will always hold a special place in my heart and mind as being a fundamental part of the nerd i am today. True classics like this come only once in a lifetime.