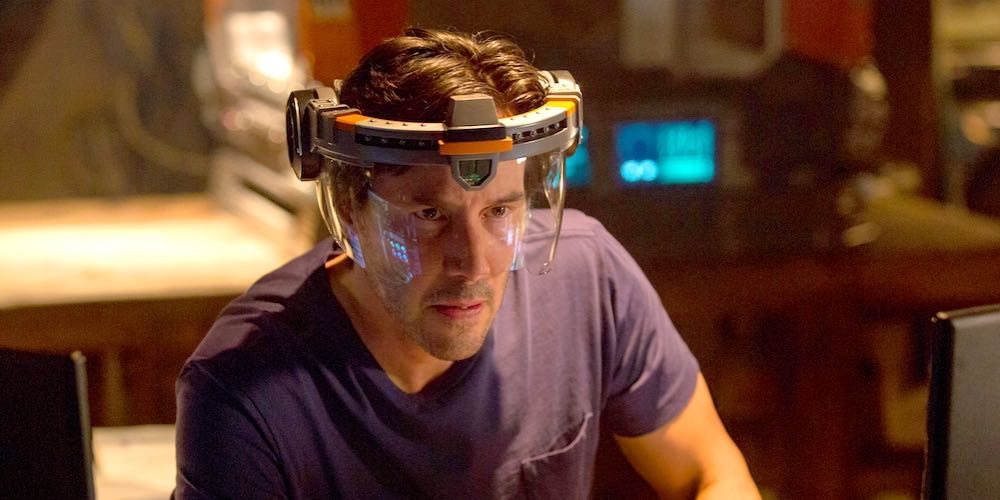 We have been indoctrinated into thinking that bad things happen if you bring people back from the dead. My entire life is scattered with stories like The Monkey’s Paw, Frankenstein, and the more recent Pet Cemetary, reinforcing this unwritten rule. We have been taught that doing so and daring to blaspheme the laws of God and nature will unleash nightmarish horrors from which there is no escape. Bringing back the dead is definitely a big no-no.

The point of all this is the creators of this film use this pop culture Pavlovian programming to their advantage in Replicas. Using that conditioning that subconsciously tells us something horrible will happen when the film’s lead protagonist ignores that unspoken rule is a big part of what makes this movie’s narrative work. They manipulate the audience while convincingly disguising this film as another cautionary tale against breaking one of the biggest rules in the history of horror films, when in fact, it’s about something completely different. The story Replicas tells proves not to be one of those old worn-out horror movie plots. This movie pulls off the equivalent of stage magic, getting you to look over here when you should be looking over there. Replicas keeps you so preoccupied with when the inevitable doom will befall this poor jerk; you may never see the story inside a story the film is actually building all along.

Admittedly I initially fell for the film’s deception entirely, thinking this was another one of those cautionary tales about technology going further than we are ready for. I was convinced this was another one of those stories that explore themes about life, death, nature, and god. While this film does touch on those themes, it does not explore them. As an introduction and part of its deception, the film provides many shots of Keanu in his lab accompanied by an almost excessive amount of the sort we expect in films like these, futuristic three-dimensional computer displays that hang in the air and can be manipulated. Replicas seems like a rather slow-paced exercise in melodrama for much of the first act, with Keanu working the role for all its worth and maybe even going overboard at times. It’s a grand example of misdirection, and it works. It’s almost enough to make us forget this character is extremely intelligent, capable, and not a victim.

Not familiar with this title? Replicas is a 2018 American science fiction thriller film directed by Jeffrey Nachmanoff and written by Chad St. John, from a story by Stephen Hamel. The film tells the story of a neuroscientist who violates the law and bioethics to bring his family members back to life after they die in a car accident. It stars Keanu Reeves, Alice Eve, and Thomas Middleditch.

About the middle of the film, the narrative changes its focus about the nature of terrible things that might happen by revealing the actual threat in the situation, turning the plot on its head. This sudden shift in the narrative redeems this film and transforms it into an engaging and thoroughly satisfying sci-fi thriller that’s worth a watch. While it lures you into thinking it’s about one thing, paying the price for trying to cheat death, this film keeps busy incorporating seemingly diverse elements into its story, such as cloning and robotics, and that classic sci-fi standby, imprinting human consciousness into a computer. This all happens while lulling the viewer into forgetting this is a cyberpunk thriller that not only works but works well. The ending of Replicas is satisfying and may take you by surprise.