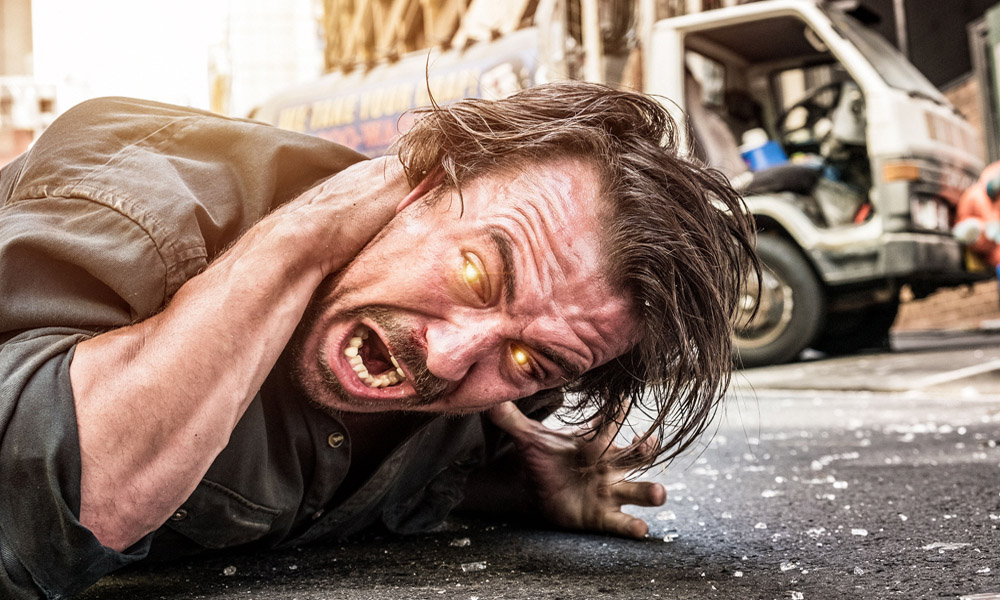 Homage is one thing. Nekrotronic is a pastiche. 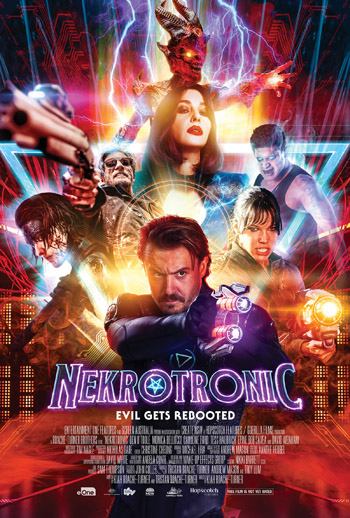 It’s an enthusiastic, energetic, skillfully executed mishmash of other more successful films which trundles along on foreordained autopilot. There’s a punk attitude here and the acting is pretty top shelf, but the familiarity of the imagery and ideas will make horror fans especially wonder if they’re watching a particularly grim parody.
And grimness is the overriding sensibility, here despite a smattering of comic relief. From the first goofy animated exposition sequence you might be forgiven for assuming that Nekrotronic is entirely a spoof. But it’s emphatically a cross between a drama and a superhero action film at heart. Everyone involved is taking events incredibly and unbelievably seriously, given how derivative every single aspect of this movie is. Nekrotronic apes Ghostbusters, The Matrix, Hellraiser, Shaun of the Dead, Deadpool, Harry Potter, and An American Werewolf in Paris so blatantly it seems like someone is going to crack a knowing grin or the references will be acknowledged, but these are the same elements the film treats with utmost severity (even the comedic ones), as if the filmmakers invented these images and ideas they’re blatantly cribbing.

When you see one character mortally injured and the camera goes into slow motion along with dramatic music while other characters scream out in muffled tones a genre savvy filmgoer will likely raise their eyebrows.
It could all be a giant coincidence admittedly, but after so many instances of cut-and-paste and cliches presented without a glimmer of awareness you have to wonder. Did the creators set out to film a faithful recreation of their favorite movies and genre tropes, were they were in fact unaware of these films and it was all serendipity, or did they figure they could get away with it if they keep a straight face?

By itself Nekrotronic is…fine. Actually the sets, costumes, effects and acting is in top notch form. Digital post production makes the limited resources gleam like a big budget film. You could be fooled into believing that this is literally another Ghostbusters film in several scenes, apart from the rampant Rated R swearing and violence. It’s all competently put together and a couple of jots above the usual brand of bargain bin B-movies you might see. Someone rubbed some polish on the graphics and props especially and the costumes, although extremely stylized, look nifty. The writing isn’t terrible when it’s set to dry humor mode either. You could again be fooled into believing you’re watching a particularly outlandish Guy Ritchie film or the fourth part of the Cornetto trilogy.

It’s when the film decides to be down to earth (which is often) that things take a turn for the banal. Evil characters cackle about their evil plans. Uncertain heroes mutter to each other about their personal issues. Plot points you will recognize if you’ve seen any movie in the last fifty years arise only to scoot along like clockwork without any twists or turns. It’s all weirdly stolid and even the comedy feels like an arbitrary addition to a comedy/action movie. I say ‘comedy action’ instead of ‘horror’ because there isn’t any horror here. A lot of the red stuff, but nothing frightening unless you have a deep-seated terror of Halloween masks. The jokes may seem a bit familiar as well.

Overall Nekrotronic is a glossy and serviceable boilerplate genre flick. Maybe it didn’t aspire to much beyond this, but that question still hovers after the final mid-credits sequence seems to try so desperately to convince you that THIS IS LEGITIMATELY COOL. Were the creators aware that their film feels like a budget version of other movies? Did they forget to make fun of the cliches of the genres they were being influenced by when they were still eager to make jokes at the expense of (of all things) cell-phone users?

I feel the film will appeal to those who want an action movie with Australian humor, but for people looking for anything new you’ll need to look elsewhere.