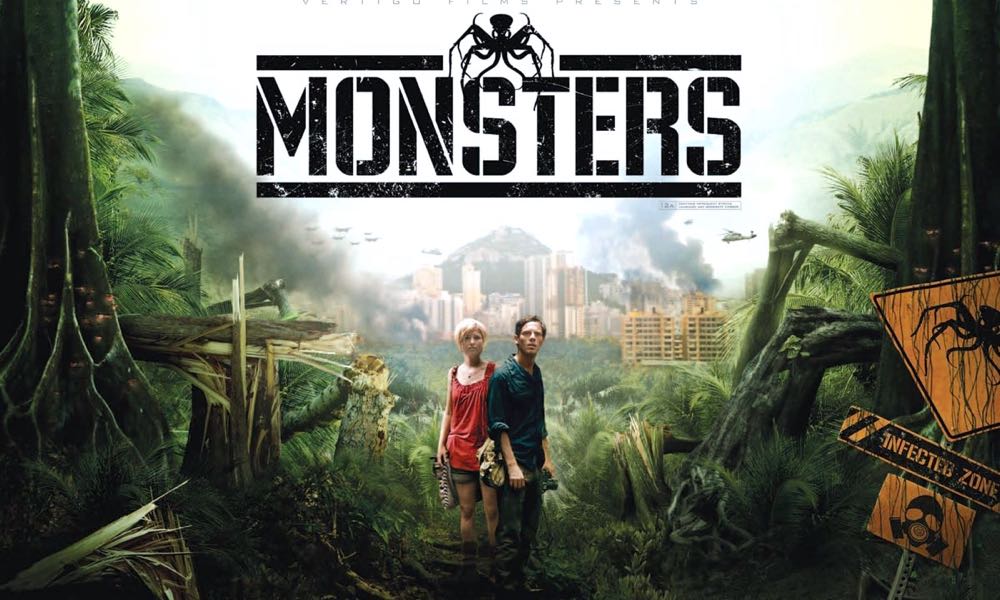 I rewatched Monsters the other night. Inspired by a suggestion from a friend, I decided I would revisit the film because, admittedly, my memories of the film were blurry. I wasn’t even sure if I had watched the entire movie in one sitting and given it the attention that watching a film, any film deserves.

Images of violent combat and scary creatures a la Starship Troopers occupied my brain in anticipation of a film that was primarily a movie-length battle between humanity and creepy invaders from outer space, hell-bent on conquering earth and taking over for reasons of their own. That is not what I got. Instead, I found myself watching a film that starts in that manner, using found footage format to introduce what I was expecting, but that quickly shifts gears into a story, primarily an odyssey taken by its two main characters.

Monsters ended up being a not unenjoyable watch. Even though the film’s narrative pulls the old switcheroo almost right out of the gate, and even though the film’s title may be misleading, essentially, it still works as a story. The film’s narrative gets helped along by its two leads, that eventually, when I realized they were going to survive long enough to get to know, the film managed to get me to care about them. The film explores the juxtaposition between these two, the situation they find themselves in, and how their relationship evolves along the way. There are subtle hints this could eventually become a love story along the way, but the movie’s writer was smart enough not to include anything overt. While it’s a remarkable achievement in other regards, this is a good movie, not great. The pacing of this movie is not bad, although it did seem to drag in places. There were some genuinely memorable moments, but anytime you find yourself checking to see how much longer a movie will last, it’s not a good sign, and unfortunately, watching this film had that effect on me.

Not familiar with this title? Monsters is a 2010 British science-fiction horror film written and directed by Gareth Edwards in his feature-film directorial debut. Edwards also served as the cinematographer, production designer, and visual effects artist. Monsters take place years after a NASA probe crashed in Mexico, which led to the sudden appearance of giant tentacled monsters. It follows Andrew Kaulder (Scoot McNairy), an American photojournalist tasked with escorting his employer’s daughter Samantha Wynden (Whitney Able) back to the United States by crossing through Mexico’s “Infected Zone” where the creatures reside.

Like I said previously, both leads help make this film more enjoyable; McNairy is a good character actor whose work I have enjoyed in productions before., while Able is believable as the trope-like spoiled poor-little-rich girl feeling empty inside.

What’s remarkable about Monsters is how this film’s creation is essentially a one-person project and got primarily created using guerilla filmmaking methods involving a great deal of improvisation.

As it says in Wikipedia: “Edwards conceived the idea for the film after seeing fishermen attempt to bring a creature in with a net and imagining a monster inside. He pitched the idea to Vertigo Films, who suggested watching In Search of a Midnight Kiss, a low-budget film starring McNairy. As a result, Edwards cast McNairy and Able in the lead roles. Principal photography lasted three weeks and had a production crew of six people. Filming took place in five countries and used many locations without permission. Most of the extras were at these locations during filming and got persuaded to act in it; all of their dialogue was improvised, and Edwards provided outlines of the primary plot points.”

Even though the results aren’t breathtaking and sometimes have the appearance of a home movie taken on someone’s vacation, as I said, this is a pretty good and primarily enjoyable ‘B-movie. I think filmmaking of this sort should be encouraged more to help avoid the stagnation and repetition of movies made by a committee that currently is occurring in the major studios, and even though one would think any film titled Monsters would include more screen time for its eponymous creatures, Actual appearances by these mysterious creatures that strongly resemble walking bio-luminescent octopi are few and far between.