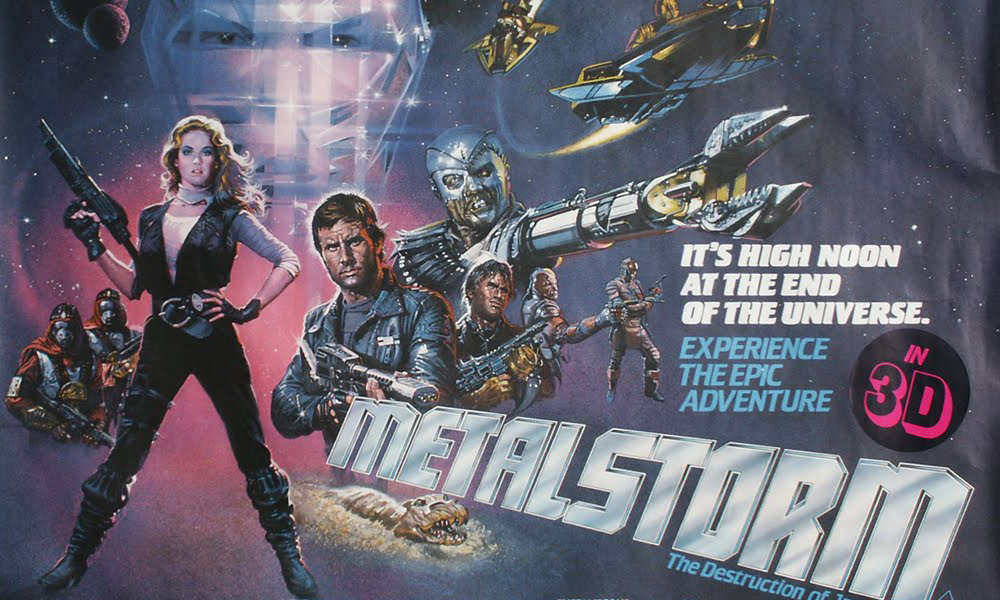 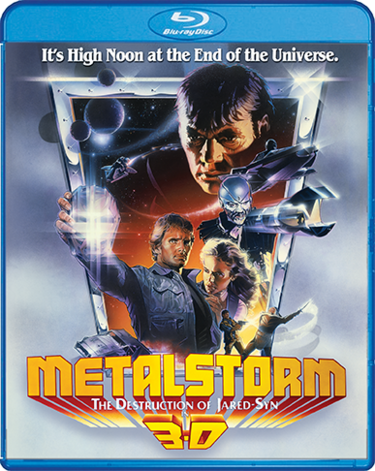 When Shout! Factory announced that Metalstorm: The Destruction of Jared-Syn (1983) was coming to Blu-ray, a deep memory in my mind awoke. Though I could not recall the movie, I knew I had seen it. Was it at the theater or was it on late night cable? With a quick jump over to YouTube, I was able to watch the trailer again and those clouded memories started to become clear. The film’s bad guy, Jared-Syn (Michael Preston), was a gaping hole. However, his cyborg henchmen, Baal (R. David Smith), made me think, yes I have seen this, but now I need to see it again.

While watching the film, I thought that the memories would come rushing back to me, where I originally saw the film and with whom. I felt for sure I would remember the adventures of Dogen (Jeffrey Byron), the heroic “Finder” who has to save Dhyana (Kelly Preston), make peace with Cyclopeans, lead by Hurok (Richard Moll), and save the planet. Instead, I suddenly realized why I couldn’t remember anything about this film. It is terrible. I must have fallen asleep, watched it with an Elvira-type host, or flipped between this and something else one evening. The film meanders with long drawn out driving shots of Dogen on his various missions. To make matters worse, when the action and the characters get going, I felt no tension. Kelly Preston’s character is abducted from the film, but we don’t see her again until the end. I never felt as if she was in any real danger. Sadly, the world that is built here gives the audience no real attachment. In short, never do I care about anything going on. It is clearly the product of a filmmaker who wanted to do a Sci-Fi version of Mad Max 2: The Road Warrior (1981), but didn’t have the skill or funds to do so.

This is one of those films that has an awesome poster (seen above), and a cool trailer (more on that in a second), but no real staying power. The best actor in the whole film is Bull from the TV show Night Court, Richard Moll, who had to be offered an additional $500 just to shave his head for the part. How do know I know this? Shout! Factory, in their incredibleness, has supplied a 42-minute making of, “High Noon At the End of the Universe”, that supplies these answers.

Ballyhoo Motion Pictures has produced an incredible making of for this Blu-ray release. It has an great sense of style and story, that makes Metalstorm: The Destruction of Jared-Syn, the actual film, laughable. We follow the production from its creation all the way through its release. Sans Kelly Preston, the surviving cast and crew of the film are here to supply you with a lot of great details. My personal favorite comment has to be from Kenny Myers, the make-up artist, who wishes the writer and director would have put more effort into the script than the actual visuals. You have to love the brutal honesty of a crew member and appreciate it even more as modern films would never have anyone say this on the Blu-ray release.

When you peel back the onion that is Metalstorm: The Destruction of Jared-Syn, you do begin to appreciate more of what happened behind the scenes. Charles Band, producer, and director, ran out of money after shooting for one week (of a 3-week shoot), took his footage to Canes and sold the picture for 3 million dollars to Universal Studios. Not bad, but as the making of continues, we learn that Universal was setting up theaters across America for the premiere of Jaws 3-D. Universal had spent a lot of money doing this and wanted to have a second 3-D film to market with Jaws 3-D. This is where Metalstorm: The Destruction of Jared-Syn takes its place in history, because it then becomes the first film ever to have a 3-D trailer. Yes, the trailer for Metalstorm: The Destruction of Jared-Syn was directly attached to every print of Jaws 3-D, so you can just imagine how many people wanted to see this film.

Metalstorm: The Destruction of Jared-Syn is a tough film to watch, especially now. I only wish I had a 3-D player set up at home so that I could enjoy the 3-D aspects of the film. There are tons of in-your-face moments that might have added a little more fun to the picture. I can’t even say that the film is so bad that it becomes good. It is not like watching Sam jones in Flash Gordon (1980) or King Kong vs. Godzilla (1962). You’ll probably fall asleep, but that making of is a pure delight of artistry and heart for people who wanted to tell a sci-fi story. Screenwriter Alan J. Adler makes a good point at the end: “If only we had more money and time, who knows?”.