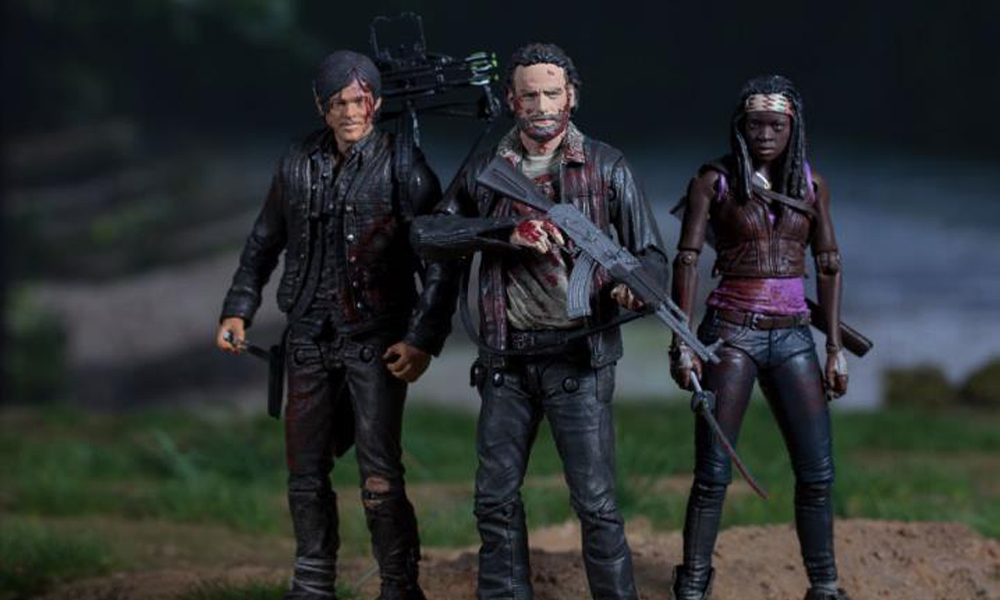 Walking Dead makes its return this Sunday for its 7th season. Ahead of the season premiere McFarlane Toys has already released new waves of figures to get you all set for the new season. The latest releases include 7” single figures and boxed sets with 5” figures…Oh and a new Negan bat which we’ll get to in a moment. 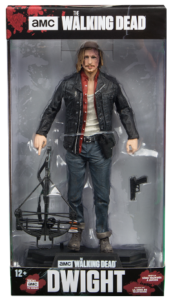 The latest 7” figures consist of Negan’s reluctant henchman, Dwight, and two Negan figures, a standard one and an exclusive “Bloody” Negan. All of these figures are geared towards the collector, packed in large window boxes that are perfect for display purposes. They all also come with a display base featuring the AMC Walking Dead logo.

Dwight features 14 points of articulation. He comes with crossbow (stolen from Daryl) and a sidearm pistol. Dwight is decked out in highly detailed dirty blue jeans, grimy tank top undershirt, red shirt and leather jacket. Best of all is the left side of Dwight’s face which is scorched from being burned by Negan’s hot iron. 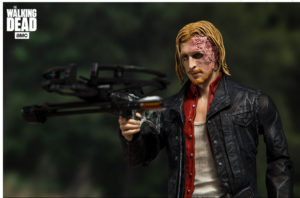 Negan also features 14+ points of articulation allowing you to pose him pointing his bat at his victims or winding up to knock one out of the park. Negan is dressed in black pants, and motorcycle boots and jacket with trademark red scarf around his neck. He comes with a swappable hand, one with glove and one without. And of course he includes barbed wire bat, Lucille. The exclusive Bloody version of Negan is the exact same mold but features blood-spattered highlights on Negan’s clothes, hands, face, ad=nd Lucille. These figures retail at $18.99. 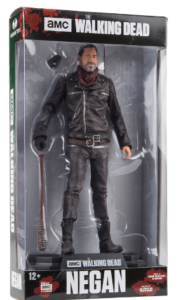 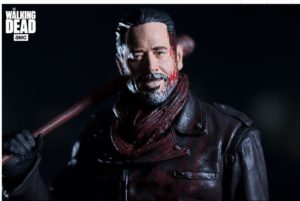 The Negan & Glenn Deluxe boxed set features 5” version of the pair complete with display base. The box is designed with large window once again geared towards displaying if you don’t wish to open the box. Negan is essenctially a smaller version of the 7” Bloody negan. He once again comes with swappable hand but also includes rifle and pistol along with Lucille. It seems like the blood on Lucille is a little less pronounced on this 5” figure than in the 7” figure. Glenn comes with rifle, pistol, knife, and watch and chain. Glenn (pre-getting brains bashed in) is splattered with blood on his clothes and face. Retail price is $34.99 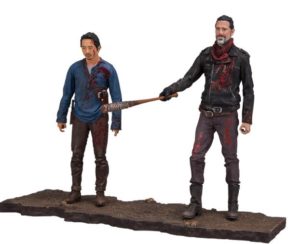 The Limited Edition Heroes 3 Pack features 5” version of Rick, Michonne, and Daryl packed in a large window box. This set, unfortunately, does not come with a display base but they are all well-articulated for posability. The trio have obviously come from a recent fight as they are all coated with blood throughought their bodies. Rick comes with his Colt Python and rifle; Michonne comes with her katana (covered in blood) and sheath; and Daryl features his cross bow and knife. Curiously McFarlane sort of skimped on the details with Daryl’s knife as it is painted in a single silver color while Glenn’s knife in the previous boxed set is painted with 3 colors and thus more detailed. I guess that and the inclusion of more accessories and a base is what made the other set Deluxe. Retail price on this set is $29.99. 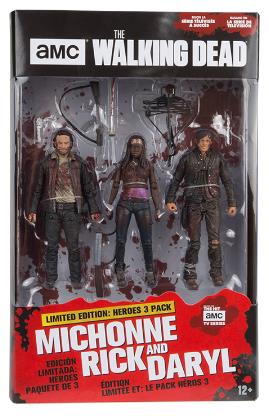 Finally, as I mentioned in the opening paragraph the last new Walking Dead product we’re covering in a full scale Negan bat known as Lucille: “Take it Like a Champ” Edition. The 32” bat matches the exact specifications that Negan uses in the TV show.

The heavy plastic bat is molded and painted in “gore-iffic” detail with bloody finger prints and painted in realistic colors throughout. It’s covered in blood indicating that Lucille has just quenched her thirst! Retail price $34.99.

So get comfy in your favorite easy chair, kick up your feet, grab your Lucille replica and get ready to enjoy the season premiere of The Walking Dead with the latest from McFarlane Toys!