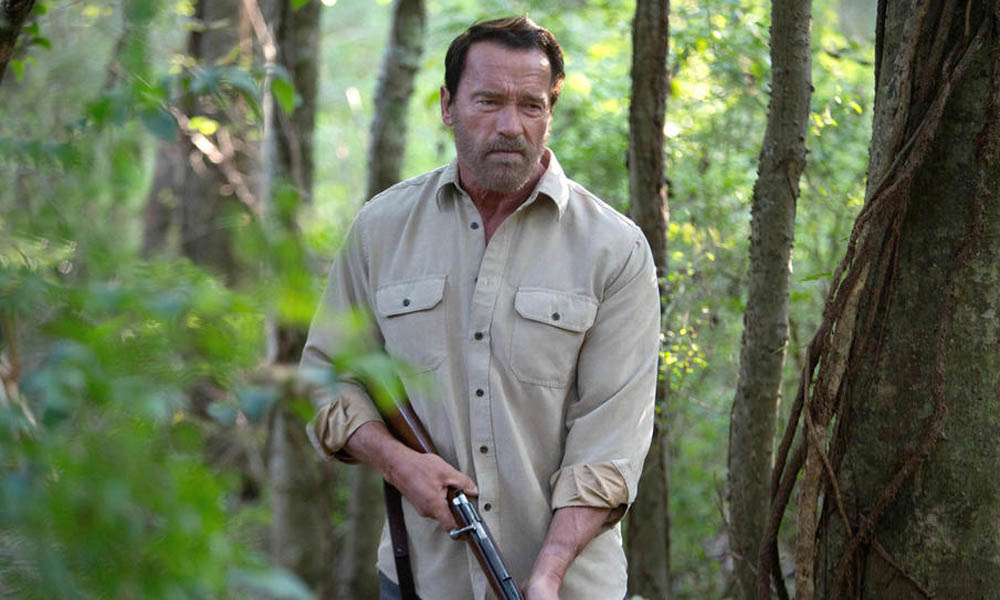 Maggie is a different kind of zombie film but unfortunately, in this case, different does not mean good.  Maggie stars Arnold Schwarzenegger and Abigail Breslin in a film that made the rounds on the film festival circuit but had only a limited theatrical run.

The film is set several months into a global pandemic of a disease known as the  Necroambulist virus, which turns infected humans into zombies, albeit on a much slower level than in traditional zombie films.  Schwarzenegger is Wade Vogel and Breslin plays his daughter Maggie.  Maggie has been infected by the virus for which there is currently no cure.  Wade is allowed to take Maggie home to enjoy a few days with friends and family until the virus progresses to the point where she must be quarantined.

Were it not for the zombie aspect of the plot Maggie might well be a film about a person suffering from the effects of any terminal illness such as cancer.  Maggie and her parents do their best to make the final days as normal as possible, if not downright boring.  Maggie visits for a final time with her high school friends, including a boy she likes named Trent who is also infected with the virus.

Director Henry Hobson takes a radically different approach to the zombie film genre by looking at humanistic side of things and how the effects of the virus on Maggie and her parents.  This isn’t something you normally see in zombie films where the victim generally turns shortly after they die.  The Necroambulist virus works slowly, turning its victim’s blood black, and their eyes pale, along with giving them a greater sense of smell and eventually a ravenous hunger.

Wade soon finds himself having to fend off the local cops who want to forcibly take Maggie into quarantine at the hospital where she will be placed into holding areas with other infected people.  Maggie’s degeneration eventually threatens to fracture her parent’s relationship as they bicker over how to deal with her illness.

Schwarzenegger, Breslin, and Joely Richardson all give top-notch performances.  For Schwarzenegger in particular, it presents a rare chance for him to show genuine emotion which we rarely have seen in his many action films.  There’s no questioning the emotional pull of Maggie.  Anyone who has watched a loved one struggle with a terminal illness will be moved by the Vogel’s plight.

However, bottom line is that Maggie is still a zombie film and under that banner it fails to connect.  Wade encounters a couple of zombies early on in the film, and they are the traditional Romero-esque slow-moving zombies but after that, nothing.  For a global pandemic there is a dearth of zombies to be found.  There are so few zombies that high school kids have no fear of gathering for a bonfire out in the middle of nowhere.  There’s no conflict, no sense of terror over what might be lurking in the darkness.  Throughout the snail’s pace of the film you keep waiting for something to happen but it never does.

Maggie is a different kind of zombie film but it simply doesn’t have enough horror elements to appeal to most fans of the undead.