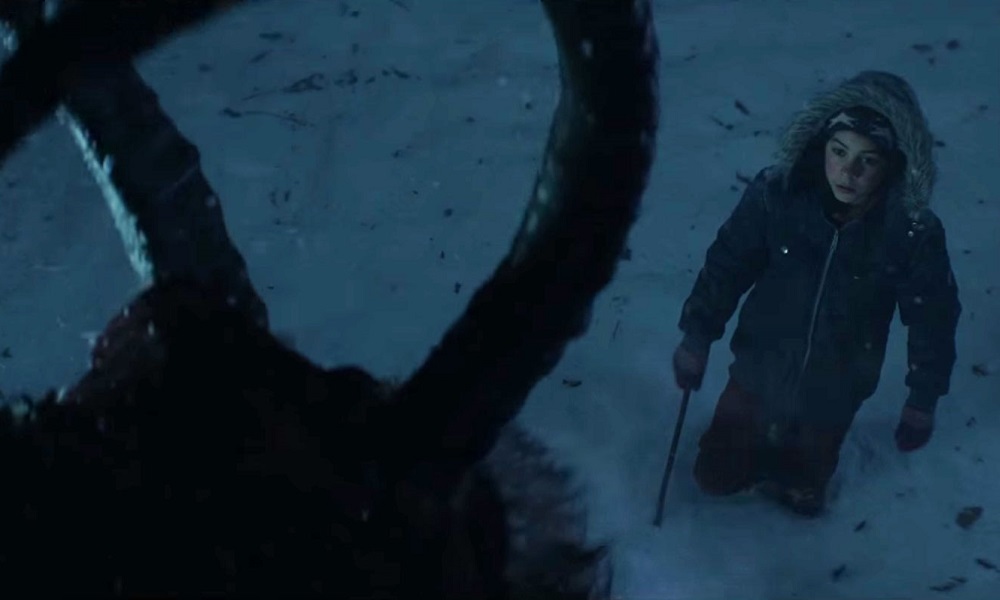 The sub-genre of Christmas horror movies is not, by and large, a proud one. You have Gremlins, which was actually originally released in the summer, and The Nightmare Before Christmas, which is too gentle to really shock. After that, the cliff falls pretty darn steep, going from bad to worse to Gary Busey as an evil gingerbread man in the blink of an eye. So before we proceed any further, let us salute Krampus for elevating this strange little cul-de-sac of horror, and giving Yuletide misanthropes something to gorge on when Gremlins can’t quite do it anymore.

That’s not to say it’s brilliant, merely that it juggles its rather eclectic notion of themes and ideas in a moderately entertaining way. It does so by taking its titular monster quite seriously, then leaving the comedy to its pleasingly broad family of victims. The Krampus, as his recent pop culture revival makes plain, was traditionally the devil to St. Nicholas’s angel: the monster who stole naughty little boys and girls while Santa showered the good versions with gifts.

It doesn’t take much to plug that basic concept into our annual orgy of crass commercialism, phony sentiment and family dysfunction. After the youngest child of one particularly put-upon family (Emjay Anthony) loses his faith in Christmas, his torn-up letter to Santa summons the dread beast, who first cuts the household off with an impenetrable blizzard and then sets his sights on the hapless residents therein. They include the usual assemblage of Randy Quaid clones, horrible aunts, monstrous cousins, surly teenage girls, and an ostensibly nice husband and wife (Toni Collette and Adam Scott) trying to hold it all together.

The Battling Bickersons routine actually works better than it should, thanks to the solid cast and some screenwriting from the three-man writing team that give the sour humor some bite. It’s nothing we haven’t seen before, but it also takes care to separate the things we all hate about the holiday with the things Christmas is supposed to really mean (like giving of yourself and appreciating those close to you). It mocks the former, but never the latter, and here and there, you can actually spot a little sweetness poking out through the gloom.

Of course, that’s before the monsters pop up and all hell breaks loose. Here Krampus really earns its stripes, starting with the decision to use practical models and puppets for all of them instead of CG. Computer graphics would have killed this dead, but by throwing actual fanged teddy bears and all-consuming jack-in-the-boxes our way, the film earns its creepiness without breaking a sweat.

In fact, it actually comes back to bite them a bit. The effects are so solid and the monsters so nightmare inducing that you can sense how much scarier they could be if the filmmakers just cut loose a little more. The almighty PG-13 keeps it from indulging those instincts, which is the film’s biggest shortcoming. It really needed some Raimi-level blood and guts to cement the over-the-top absurdity of it all. As it is, we get the kids’ table version, and can only hope that an unrated Blu-ray will give the mayhem that bloody extra coat it deserves.

Such stumbles notwithstanding, however, Krampus makes a dark little treat for those already bracing themselves for an excess of Christmas cheer. Admittedly, it doesn’t have much competition in its chosen field, but so many filmmakers before it have taken the easy way out and left us with coal in our Christmas horror stocking. This one actually seems to mean it, and in so doing, finds the path to success between the abundance of pitfalls. I suspect it will become a minor holiday classic of its own, in those homes that need a little darkness to counter all the Christmas light.