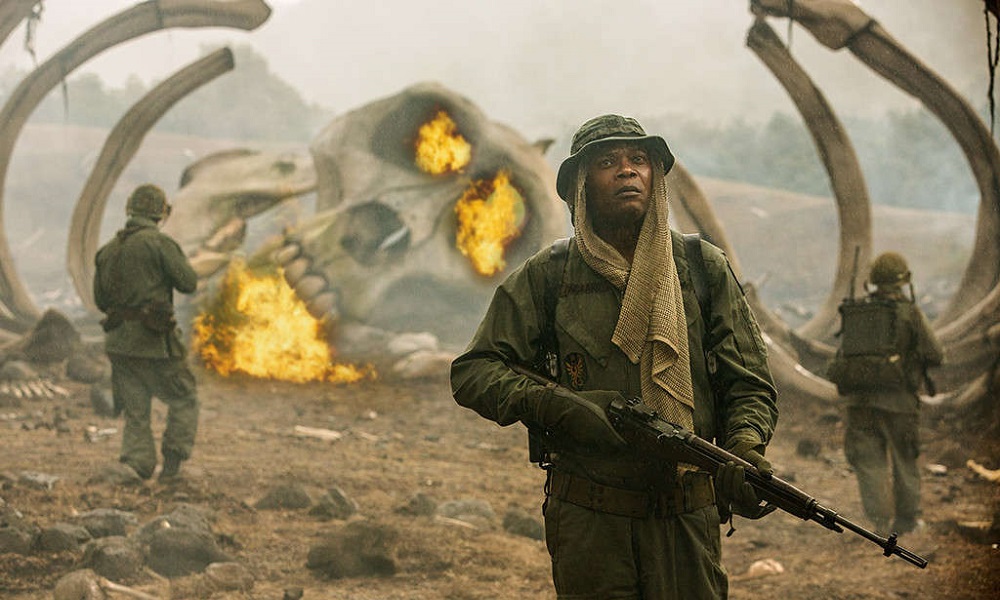 One early critic of Kong: Skull Island worked himself into a lather complaining about its “nearly shot-for-shot” rip-off of the Ride of the Valkyries scene from Apocalypse Now. He misses the point… by a wide margin. Kong: Skull Island takes its mash-up concept seriously, and its full-bore embrace of Vietnam movie clichés – topped by Samuel L. Jackson’s helicopter unit going toe-to-toe with a 100-foot gorilla – becomes as important as the ape itself. Military jargon, musings about what we lost in the jungle, CCR and Jefferson Airplane pounding from the soundtrack… these aren’t bugs, they’re features. And OMG are the results glorious.

Every Kong movie grapples with the reality that it can never approach the 1933 original. Remakes tried to do their own thing without actually changing much, while outliers came across as embarrassing misfires (Son of Kong) or just plain weird (King Kong vs. Godzilla). Skull Island is the first film to really escape the shadow of the original, basically by refusing to compete with it. It does more by doing less: enhancing the pulp origins of Kong’s world and focusing on having a good time instead of reminding us how much better its immortal predecessor was.

It actually owes its biggest debt to the massive push behind the disastrous Dino De Laurentiis remake from 1976. In an effort to turn that film into the next Jaws, De Laurentiis oversaw a big marketing campaign that promised the moon (which the film itself infamously failed to deliver on). Skull Island takes the vibe of that moment and connects it to a battle royale worth watching. The gunships and napalm make a perfect pop-culture counterpoint to the 30s-era adventure material, and director Jordan Vogt-Roberts uses the resulting tone to cheerfully blow our socks off. There’s no deeper message here, besides the obvious one about humanity’s arrogance in the face of Mother Nature. It’s basically a grand excuse to watch two heretofore separated genres charge each other like bull elephants.

Indeed the only thing he actively cribs from the ’33 version is the structure. The first act sets up the human characters – serviceable, but largely perfunctory – to give us a rooting interest, then the rest of the film just lets ‘er rip. John Goodman’s wild-eyed conspiracy theorist sees an opportunity to prove his thesis when satellite images provide evidence of a new, unexplored island in the South Pacific. He and his partner rustle up an air cavalry unit getting ready to rotate home from Vietnam, as well as a gaggle of other (presumably tasty) scientist types to go exploring. Turns out, the island is full of giant bugs, giant lizards and one REALLY cranky giant monkey all-too willing to defend his turf.

Vogt-Roberts varies the mayhem appreciably, and while Skull Island exists solely to watch various throwdowns between Kong, the humans and a never-ending stream of enormous CG creepy crawlies, it never becomes dull or repetitive. On the contrary, Skull Island enjoys ramping the insanity up to 11 in as many ways as it can, then cackling like a lunatic while its hapless humans run for their lives. It treats its concepts with just enough respect to enjoy them while allowing the fun to creep in by letting the air out of pseudo-pretentious lines like “we don’t belong here.”

Casting plays a vital role in keeping us grounded, since the characters remain thinly-drawn archetypes at best. Skull Island compensates with a lot of movie-star charisma, and the likes of Goodman and Tom Hiddleston appreciably hold the screen when Kong and his rivals periodically vanish back into the jungle. Jackson gets his Ahab on as the army commander obsessed with avenging his lost men, taking spectacular advantage of his ability to speak volumes without saying a word. Brie Larson forms a nice rapport with Hiddleston as the anti-war photographer tagging along for the ride. (She lets a few lovely Fay Wray moments sneak up on us as well.) And character actor Shea Wigham reminds us why he’s welcome in almost any project, as a bent helicopter pilot who finds Zen acceptance in a completely bonkers worldview.

But the real scene-stealer is John C. Reilly, going full-bore Ben Gunn as a WW II fighter pilot stranded on the island for the last 30 years. Equal parts plot expositionist, audience surrogate and comic relief, he encapsulates the film’s tone perfectly: gonzo, over the top and just respectful enough to give us a rooting interest in the outcome. He even finds a little pathos and sympathy for his character amid the prehistoric chaos swirling around him, no mean feat with popcorn this tasty.

That makes the resulting roller coaster exceedingly sturdy: living up to its commitment and never taking the eye off the ball. Warners seems to have learned its lesson from the disastrous DCEU rollout, and while we see a few shout-outs to the larger “monsterverse” to come, it doesn’t need any of that baggage to justify itself. We’ll wait and see whether they can keep that energy up, but between this and Gareth Edwards’ Godzilla, the opening steps have been confident and sure-footed. In an era defined by false-promise advertising and cinematic reach far too often exceeding its grasp, it’s nice to see a film just doing what it does best. 2017 has already seen some great genre efforts; Skull Island earns its place among them simply by taking pride in its B-movie credentials.