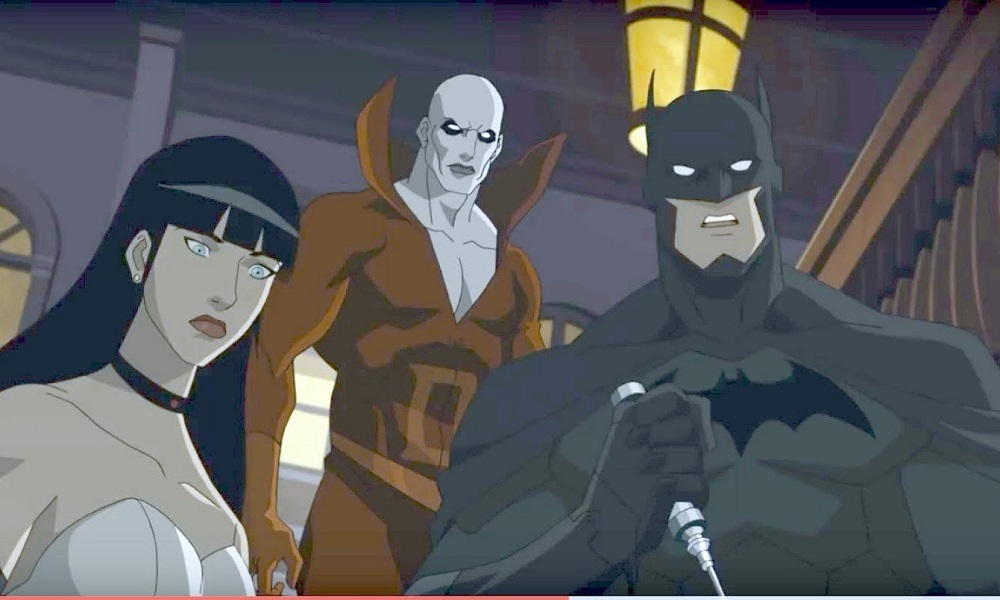 Justice League: Dark is the latest original animated film from Warner Bros. and DC Comics, and, if you are counting, the 27th in the series. Justice League: Dark brings a refreshing change from the Superman/Batman/Justice League-centric films that have been released over the past few years and gives a fresh group of characters a chance to shine. 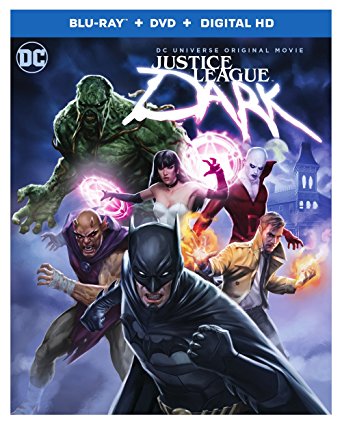 Citizens in Gotham, Metropolis, and other cities begin to have paranoid hallucinations, seeing other people, even family members as demons and causing them to go into murderous rages. The Justice League meets at the Hall of Justice to discuss the outbreak that is taking place worldwide, concluding that it must be caused by some magical/supernatural phenomena. Batman is skeptical, however, until, as Bruce Wayne, he is possessed by some force that scrawls the name “Constantine” on the walls of Wayne Manor. We will later find out he was possessed by Deadman.

Batman enlists the aid of Zatanna to track down Constantine (with Deadman in tow) at the House of Mystery. They are soon joined by Jason Blood, aka The Demon Etrigan, and the mercurial Swamp Thing to track down the man they believe behind these magical attacks…the wizard Felix Faust! But the team soon learns that an even deadlier threat looms in the shadows.

One of the things I have disliked about the recent DC Justice League films was that the characters were based upon the DC Comics reboot of the New 52 meaning that most of them acted like a bunch of jerks.  The recent “not a reboot” called Rebirth is restoring the balance but in Justice League Dark we are getting the characters we’ve come to love in the comics. Matt Ryan who played Constantine in the live action and all too short-lived TV show reprises his role as the wise cracking demon hunter/sorcerer. Having played the role in the TV series Ryan gives the animated film some definite comic book cachet.  Swamp Thing is a powerful, and intimidating force of nature while The Demon is well armed with his trademark rhyming verses.

Director Jay Oliva wisely doesn’t take it for granted that everyone knows who characters like Deadman and The Demon are and provides short, but valuable origin vignettes for the characters, giving them some depth that they would otherwise lack. In fact, along with Ryan, Nicholas Turturro steals the show as Deadman, who with his Brooklyn accent and playful demeanor provides a fair bit of comic relief. And that comic relief is needed as the film takes the “dark” part of its title quite seriously.

There is a fair bit of gruesome imagery. One man who has driven man is found to have a shed full of his neighbor’s rotting corpses whom he killed believing they were demons. Later, while checking on one of the victims in the hospital the team is attacked by a creature composed of raw sewage that rampages through the hospital leaving in Deadman to remark that “the shit has really hit the fan.”

The film has a couple of fantastic, knockdown, drag out magical battles that have some of the best effects yet in any DC film. It was nice, actually, to see Batman relegated to a supporting role as Zatanna, Constantine, Faust, and The Demon engaged in war of spells and magical weaponry.

Justice League: Dark is one of the best DC animated films in sometime not only because it is a good movie, but also because it steps outside of the usual Batman/Superman safe space and gives viewers characters in lead roles that they typically wound only see in bit parts.

The Story of Swam Thing – A look at the history of the character with comments from co-creator Len Wein and artist Kelley Jones.

2016 NY Comic-Con Panel – Featuring many of the cast members discussing the film.

Did You Know? – short 2 – 3 minute segments with interesting details about Constantine, Black Orchid, and Dead Man

Sneak Peek at the next DC animated film Teen Titans: The Judas Contract