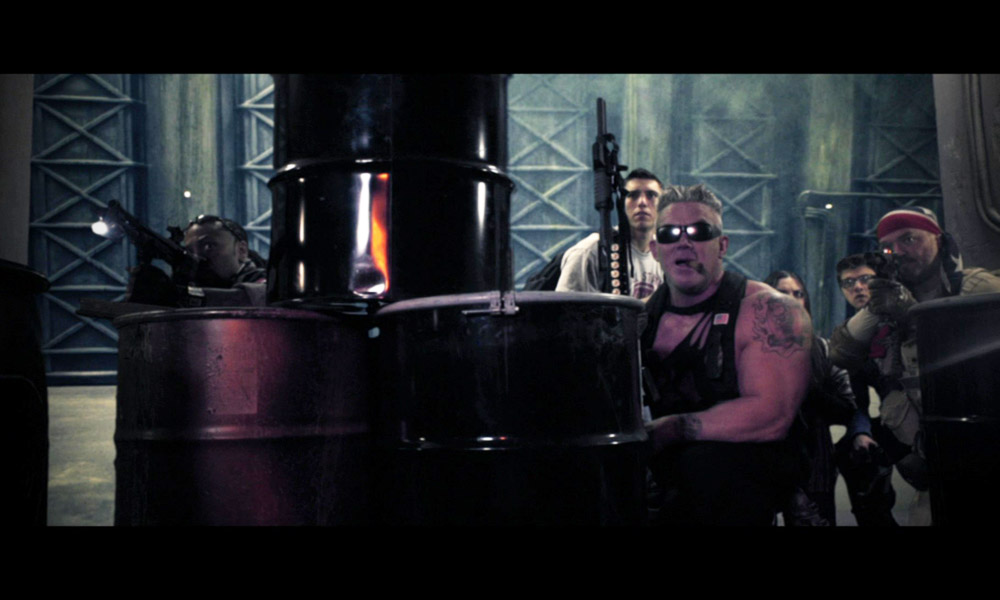 The makers of this movie have to be massive fans of genre filmmaking. They’re not necessarily good at making movies themselves, and therein lies the central conflict of this production. There’s a fine line between terrible on purpose and terrible by accident and Jurassic Dead skitters from one side to the other. Until the final scenes I had no idea if this was an incompetently made science fiction horror film or a really stoney faced parody of the same, and part of me still isn’t certain. The film plays every stereotype completely straight with weird conviction.

It’s all here and not once is it winked about: braindead bickering college students forced by a breakdown to seek shelter in a seemingly abandoned military bunker, sunglasses wearing mercenaries chomping on cigars, a wheelchair-bound vengeance-driven mad scientist and, yes, zombie dinosaurs. On one hand you have to admire the conviction of the clearly amateur cast reading ridiculous lines with such conviction. On the other it’s so rote and cliche you can’t take a second of it seriously, so during moments where characters are attempting to act their hearts out, boredom sets in when you can recognize the scenarios from a thousand other films and you know beat by beat what will happen and how.

Jurassic Dead is too obtuse to be entirely successful as a spoof, and it’s far too shaky to be taken seriously. You might enjoy this movie in the same vein as a made-for-tv distraction while doing something else during the downtimes but at least there’s enough to laugh at to make it less than a chore. The people making the film probably had a lovely time and hopefully were well compensated but if you’re going to use this much talent and resources maybe make a movie that has some kind of identity rather than feeling more like a cheap hodgepodge of references.