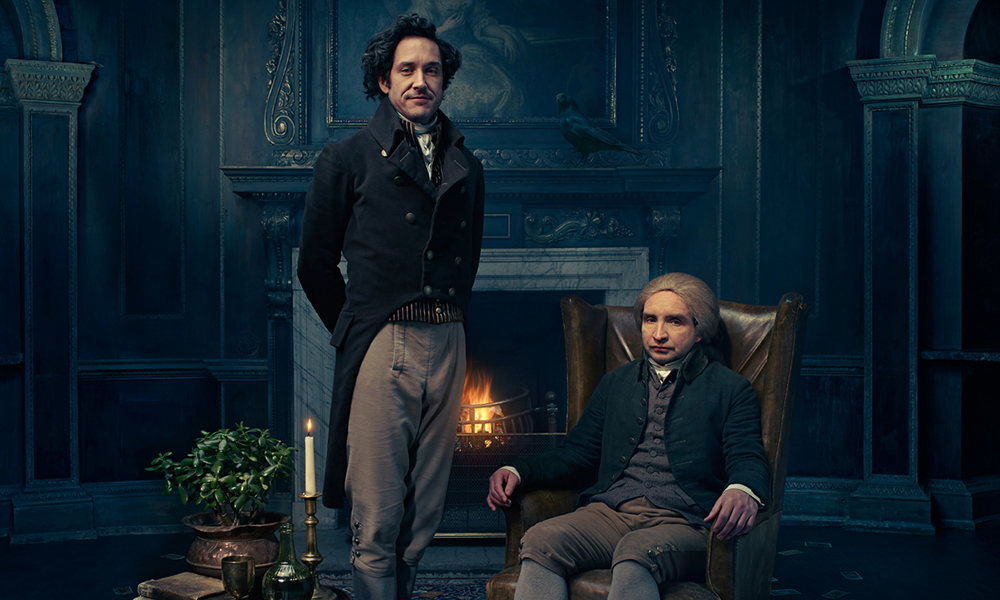 Jonathan Strange & Mr. Norrell is a seven-part British fantasy historical drama mini-series based upon the 2004 Susanna Clarke novel of the same name.  The series debuted this past weekend on BBC America.  Taking place in an alternative history England where magic is real, it is set against the backdrop of the Napoleonic Wars when the English are losing badly.  The story is an eclectic blend of fantasy, history, and gothic romance.  Think Dickens with a sprinkling of J.K. Rowling.

A young man named Mr. Segundus is trying to find out why magic has seemingly disappeared from England.  He attends a meeting of a society of magicians only to find that they don’t actually practice any magic.  His quest for magic books leads him to the home of a man named Mr. Norrell (Marsan) who possesses a vast library of arcane works and claims to be able to work real magic.  Segundus arranges for the society of magicians to see a demonstration of Norrell’s power as he animates an abbey full of statues.  Norrell’s servant, John Childermass, convinces him to travel to London to offer his services to the government to assist in the war effort.  While in London he has encounter with a haggard and seemingly mad street magician named Vinculus who gives Norrell a cryptic warning about the Raven King.

The other major storyline involves a young gentleman named Jonathan Strange who inherits his father’s vast estate and plans to wed his love, Arabella.  While traveling the countryside, Strange also encounters Vinculus who tells him he is destined to become a great magician and sells him two spells.  One spell allows Strange to be able to use a mirror as a kind of crystal ball where he peers into and is able to glimpse Norrell.  Later, Norrell makes a deadly and perhaps ill-advised deal with a supernatural being to bring the young wife of a government official back from the dead.

Jonathan Strange & Mr. Norrell plays quite like a proper British drama but is infused with its fantasy elements as well as a good deal of humor.  Eddie Marsan is perfectly suited to play the eccentric and neurotic Mr. Norrell.  He’s made a career playing oddball characters in films like Hancock, Jack the Giant Slayer, and the Sherlock Holmes films.  Although he plays his role in a reserved manner, he commands your attention every time he is onscreen.

Robert “Bertie” Carvel as Jonathan Strange is far less known, with the majority of his background coming in English theater with a limited amount of TV and film appearances.  However he presents a somewhat foppish, blank-slate character and it will be interesting to see his character grow over the course of the series.  Other notable performances come from Enzo Cilenti as Childermass and Paul Kaye as Vinculus.

Directory Toby Haynes doesn’t overdue the magical elements.  He gives you just enough to remind you that magic is a very real force in the world but also plays up the mystery of why it disappeared from the land.  The deliberate pace of the show might not be for everyone’s tastes but it is definitely a change from the many effects-laden genre shows on TV today.