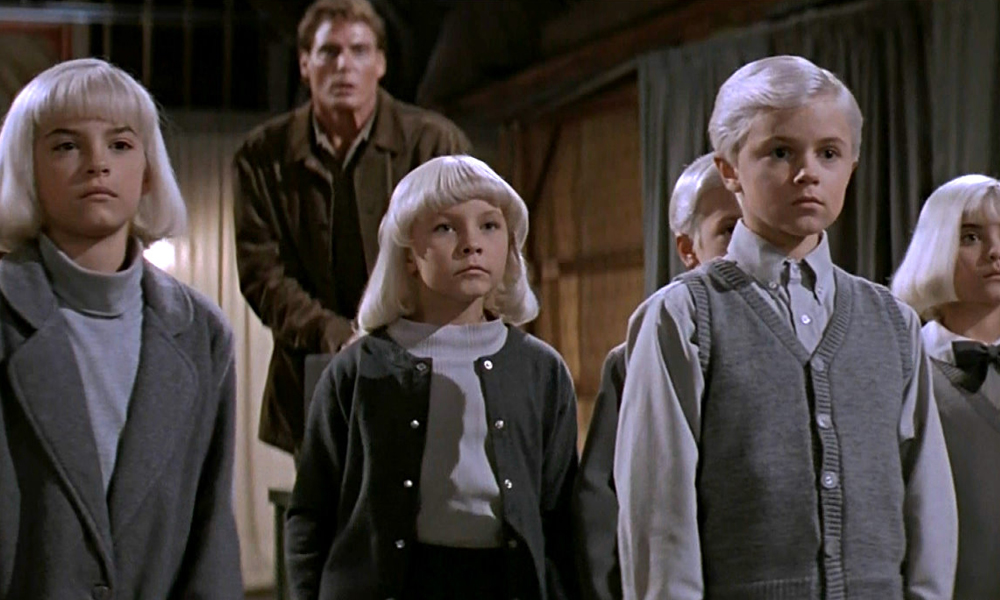 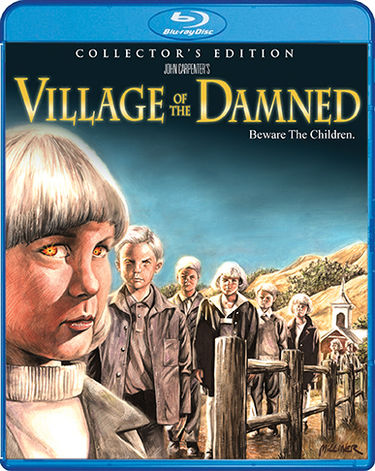 I remember going to see Village of the Damned on a Saturday afternoon. The year before, I had just watched John Carpenter’s In the Mouth of Madness and felt the director had returned to form. The cast here was great, Superman (Christopher Reeve), Luke Skywalker (Mark Hamill) and Saavik (Kirstie Alley) from Star Trek II. A great sci-fi cast, for what I thought would be a great sci-fi movie. To say that I wasn’t disappointed would be lying. However, Village of the Damned has that certain something that just makes it unsettling. What’s the story behind this movie? The cast gives 100% and Carpenter gives the right amount of homage to the source material, but still makes the story his own, hence the title, John Carpenter’s Village of the Damned. So what went wrong? Answers arrive in Scream Factory’s new Collector’s Edition Blu-ray.

The story of Village of the Damed is simple. A town in northern California has a mysterious blackout. However, the electricity is not the thing that goes out, but the people. All the town’s inhabitants pass out for hours. When they awaken, they are left with more questions than answers. Was this a chemical weapon? Act of God? Or is it just the unexplainable. A few weeks later, Dr. Alan Chaffee (Reeve), the town’s doctor, discovers that many of the women in town are pregnant, up to and including a virgin and his own wife. We jump to eight months later and the children are all born with the same DNA, as if they all had the same mother and father. Thus setting the stage for our journey.

Dr. Susan Verner (Alley), a government specialist who studies the children into their early years, is fascinated with their intelligence and advanced mental capabilities. What makes the film so unsettling is the performances that Carpenter pulls from each of these child actors. Mara (Lindsey Haun), Dr. Alan Chaffee’s own daughter, emerges as the cold calculating leader, whereas David (Thomas Dekker) become the sympathetic one, because his mate died during child birth.

All this sounds great, but the story falls apart somewhere in the third act. A relationship exists in the final act between two of the parents, that comes out of nowhere. The town’s minister, Reverend George (Hamill), a man of the cloth, hates and despises these children, one of which is his own, yet no answer is provided in the confines of the story. When films of this nature were released, at best, we were given a few articles here and there in various Sci-Fi and Horror magazines about their production. Yet, those stories and interviews are all about selling the product. Rarely does a director come out and say, early on, “its crap” before the film is released. Nor does he/she say, “the studio recut my movie, I have no idea what it looks like now.” They want to work again, as well as make something off the film. The stories of how films fall apart or got out of control, are usually told at conventions. A fan is usually all too blunt when questioning a director and years later, a director or cast member can be more candid. Thankfully, in this era, companies like Scream Factory, give this film the proper releases and allow those involved to discuss what really happened. If you are a fan of John Carpenter, you will want to watch the special feature included here, “It Takes A Village: The Making of Village of the Damned”. Many of your questions will be answered.

As it turns out, Carpenter had a picture deal with Universal Studios. He wanted to remake The Creature from the Black Lagoon (I know, right, how cool would that have been?). But, the studio wanted Carpenter to take a crack at a new version of Wolf Rilla’s 1962 film titled, Village of the Damned. The script had been worked on by Wes Craven (A Nightmare on Elm Street) and Carpenter decided to make the studio happy. In the special feature, Carpenter admits that he did not care for the script he was given and hoped to make something closer to the original film. He reveals a little bit of what that script would have been like. However, script problems weren’t his only issues.

it turns out that he and producer Sandy King were butting heads with the studio. These disagreements eventually hurt the final product. Other members of the cast mention similar problems and of course the budget also became an issue. This is why numerous scenes and sub plots were never filmed. Yet, the biggest hurdle John Carpenter’s Village of the Damned faced was its release after the Oklahoma City bombings, which also dealt with the death of children. According to Sandy King, it only added to the film getting poorly reviewed.

The special feature is nearly an hour and it is not just a bitch fest about why the film was not the complete vision of its director. In fact, a large portion of it discusses working with Christopher Reeve. This was his last film before his accident. No one has one bad thing to say about him, only love and affection for the man. The kids, now all grown up, regale us with stories that they didn’t even know he was Superman. However, all of them knew that Mark Hamill was Luke Skywalker.

Scream Factory has done it again with another stellar blu-ray which not only highlights the film with a prestige transfer, but marks a moment in time when one director tried to make a film for the studio and lost control of his vision. I like the film, still, for Christopher Reeve’s performance, Kirstie Alley playing a cold hearted bitch, the Carpenter regulars (Buck Flower and Peter Jason), and those unsettling little kids. This is one for the John Carpenter collectors.

NEW HORROR’S HALLOWED GROUNDS – revisiting the locations of the film

NEW The Go To Guy: Peter Jason on John Carpenter