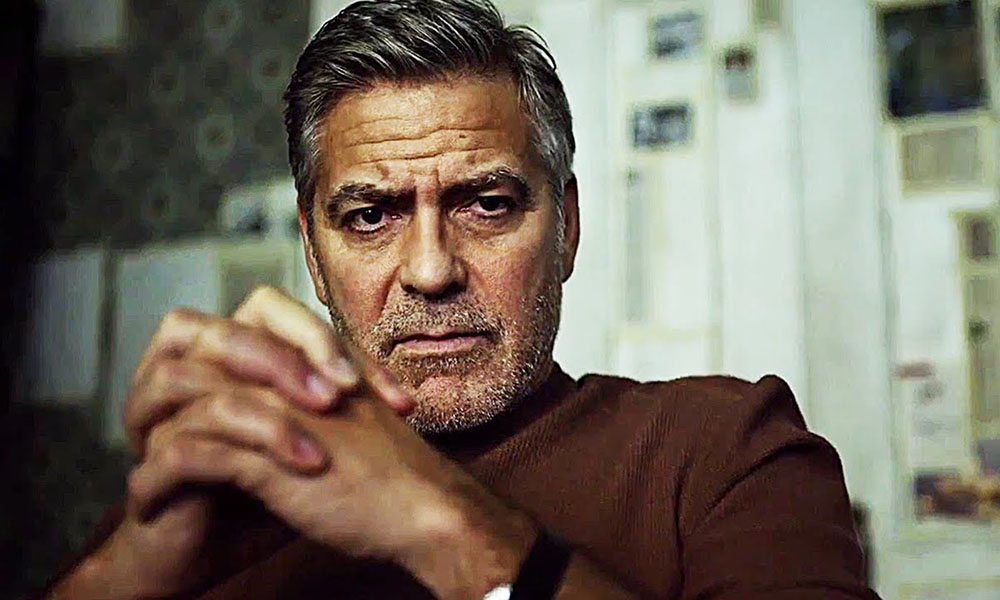 You may have heard of obscure actor George Clooney, whose hard-to-find films include Three Kings, Out of Sight, Solaris, Gravity and Steven Soderbergh’s Oceans series. He won the Academy Award for Best Supporting Actor for Syriana, then a second as one of the producers on 2012’s Argo. He’s also earned accolades behind the camera, directing such efforts as Good Night and Good Luck, Confessions of a Dangerous Mind and The Ides of March. He appears in the upcoming Tomorrowland, playing an inventor who believes his best days are behind him before making an extraordinary discovery. He recently spoke to the press about the project; a partial transcript of the Q&A follows.

Question: You’ve made a lot of bold films in your career, particularly the more political ones. But I think this one is right up there, as far as taking risks. Do you see it that way?

George Clooney: *deadpans* Yes, putting me in a summer movie is a very bold thought. [Laughter.] Seriously, I think it is a really bold thing for Disney to do a film that isn’t a sequel and isn’t a comic book, to really invest in a summer film of this sort. Although I have to say, just so we’re clear, when Brad Bird and Damon Lindelof showed up at my house, they said, “We’ve got a part that we’ve written for you.” And then I opened up the description of the character and it’s a 55-year-old has-been. I was kind of going, “Hang on a minute; which part am I reading for?”

It said former genius, boy genius, who has gotten bitter in his old age. We live in a world right now where you turn on your television set see all kinds of horror. It’s rough out there. It’s not fun. And it can really wear on you after a period of time. And we see generations now feeling as if it’s sort of hopeless, in a way. What I love about this film is that it sort of speaks to the idea that your future is not preordained and predestined, and that if you’re involved, a single voice can make a difference and I believe in that. I loved the theme or the idea that there’s still so much that we can all do to make things better.

Q: This is the summer movie with a serious subtext, and you get to be the gruff, grumpy cynic. And yet at the same time, you’re searching for hope, and I’m curious if that arc reflects the struggle that you personally have, and whether you relate to that in this particular context of this movie.

George Clooney: We have time for one more question. [Laughter] Listen, I actually grew up during the Cold War. And I always found that – although we always thought that the world would end in a nuclear holocaust at some point – everybody was pretty hopeful. There were an awful lot of things going on that you felt you could change. I grew up in an era where the voice, the power of the one, really did feel as if it mattered. We had the riots that are reminiscent of the things we are looking at today, but we had the Civil Rights Movement and we had the Women’s Rights Movements and all those things that you felt you could actually have some part of changing. And actually, if you look at the things that changed in the 1960s and early 1970s, individual voices did make a huge difference. It wasn’t governments doing it, necessarily.

I didn’t ever have that great disappointment in mankind. I always felt like it was going to work out in the end. And I still feel that way. And so what I loved about the film was that it reminds you that young people don’t wake up. They don’t start out their lives cynical, or angry or bigoted. You have to be taught all of those things. And I watch the world now and think I see really good signs from young people out there. And I feel as if the world will get better. And I’ve always been an optimist. I’ve been a realist, but I’ve been an optimist about it. And I really related to the film because – while first and foremost, it has to be an entertainment, it is hopeful.

Q: Brad has already said the message of the film is to contribute to make a better world for the future, especially for the new generations. I would love to know if you can tell me, as a person, what do you make every day, to make this world better? How do you contribute to the world to make it better?

GC: I think everybody sort of tries to participate in any way they can. There’s a funny thing about careers in a strange way, which is as you’re working, you find that as time goes on and as you become more comfortable in your career path, and things are starting to make sense, and it’s not just about trying to work, you’re able to focus on other things and other people, and try to get things that you don’t really need, particularly in this line of work where there’s a lot of attention focused on you. You try to just turn that focus and put it on places. You know, I have places, obviously, that matter to me, like in sub-Saharan Africa and places like that, that matter. And I’ve been involved in lots of those things.