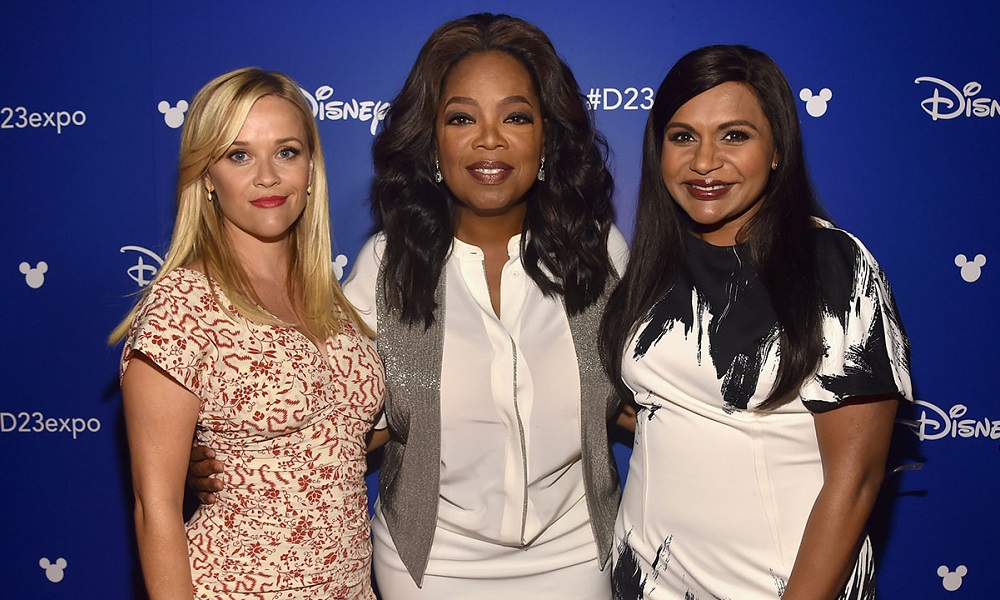 Oprah Winfrey, Reese Witherspoon and Mindy Kaling currently stand as some of the most well-recognized people in show business, complete with hit shows, Oscars and “you get a car!” meme immortality. They joined forces to play the decidedly eccentric “Mrs” (Who, Which and Whatsit) in Ava Duverney’s ambitious adaptation of the YA classic A Wrinkle in Time, They spoke about the project at a recent press day for the film.

Oprah Winfrey: I’ve never read the book… and I’m a reader. It just never got to my neighborhood. But Ava Duvernay was such a draw. She has so much talent and so much passion for this project. She got me interested from the beginning. Even so, it wasn’t until the very first day I was called that I understood that this was some kind of movie! And from that… just the word “delight,” when you look up the word “delight,” there’s my picture. For being in this film. The whole process has just been one big delight.

Reese Witherspoon: I had a version of Oprah’s story, too, where my agent called me and said, “Ava Duvernay wants you to be in a movie.” “Yes! Great, when do I show up?” They said, “Oh no, she has to take a meeting.”

So I sat across from her as she talked about this movie, and I was like, “Really you want me?” And it was really, it’s very flattering to be chosen to be part of Ava’s movies because she doesn’t just make a movie, she makes an experience for everyone. She cares about what happens in front of the camera and she cares about what happens behind the camera. And everybody feels like they are important. Special. Honored. Valued for their contributions. And I feel like this was a masterclass in how to be a very thoughtful filmmaker. It was a privilege and an honor, and I got to be this amazing celestial person, who hangs out with Oprah and Mindy all day. We got to talk about what would we impart to a young woman today, right now? And discuss that with Ava, and it was extraordinary. Really, a beautiful experience.

Mindy Kaling: It’s the same with me. I loved science fiction and fantasy growing up but it was a genre that largely did not love me back. I never saw any representation of like a dark-skinned Indian woman, Indian girl, anybody, in anything that I saw. And it’s a really peculiar thing when you grow up loving something that shows you no love back. It’s such a pure love, because you’re not getting anything from it. And to be part of this movie… I broke out in TV which is so welcoming to me, and comedy which is so welcoming to me, but to be part of this, and to be on a green screen stage in harnesses because you’re doing a science fiction fantasy movie, it’s so fun because I finally feel welcomed with open arms to something that has ignored me completely.

Ava saw something in me. We actually met at a party, and we were two of only three women of color at this big party. And after I finished talking to her, we had a great conversation. And I thought, “our genres are so different, we’ll never cross paths,” and then this happened. So I feel so blessed to be part of it, and to wake up every morning and spend four hours in the makeup trailer with these two.

I think if that can be something that the miniature version of me could watch and be excited by, I think that’s such a huge thing. So that was exciting.

Q: Oprah, what’s different about this project as opposed to some of the other ones that you’ve worked on? Not just the script obviously and the cast, but in terms of the process with working and how you arrived to this point.

OW: Well, first of all, you have Disney money. With something like Selma, there’s a margin of error because the money isn’t there. We had one day to shoot everybody becoming across the bridge in Selma. You got to get it before it rains, and if it rains, you’re not gonna get it. And you don’t have enough money to try it again. There’s a big difference when you have studio money behind it. You’ve got the Disney machine and that’s why one of the reasons why this is so exciting, that Ava DuVernay is at the helm of that. It fills my heart, every time I think about Ava and her dreads and her sneakers and these big cranes and all of these men running around, taking direction from her. And to see her be the master of that, to orchestrate all of that was, was powerful and inspiring. And it touches I think the part of us that recognizes, oh yeah, we can do that, we’ve always been able to do that, and I was just so proud to be associated with her and her ability to make this film possible. So that’s what was different. I was with her on a film where literally So, big difference. Big difference.

Q: This is a hopeful movie. Do you think it’s possible to be hopeful in dark times?