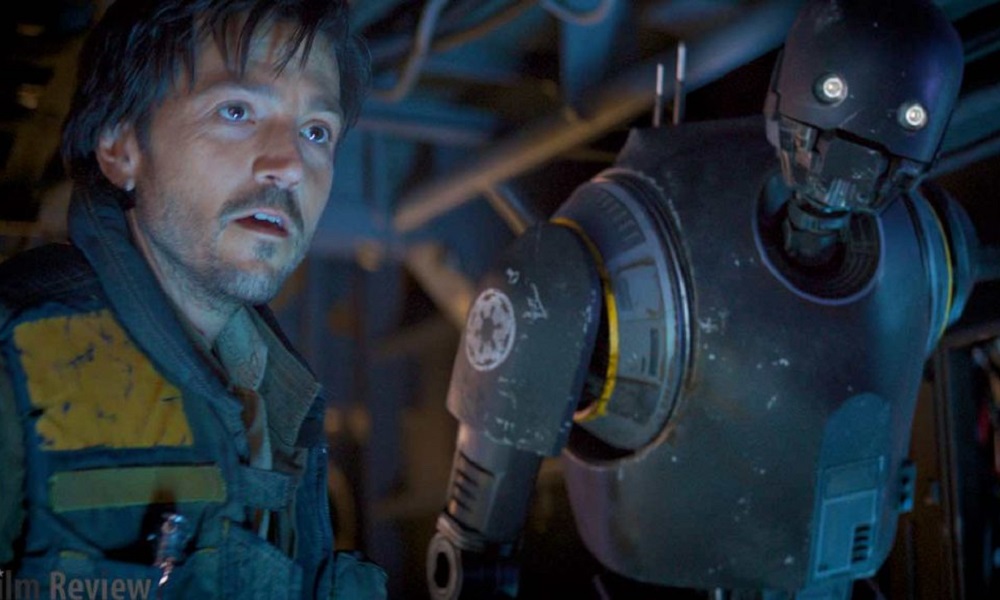 Diego Luna hit the big time with Alfonso Cuaron’s Y tu Mama Tambien, playing a teenager on an extended road trip across Mexico. Three years later, he stole the show in Steven Spielberg’s The Terminal and has enjoyed a steady diet of prominent roles. Alan Tudyk will forever be associated with Wash in the cult classic TV series Firefly. But his lengthy career includes cult films, blockbusters, television shows, video games, and motion-capture performances such as I, Robot. They team up in Rogue One as an unlikely partnership:” Diego playing a hardened Rebel captain, Tudyk is droid co-pilot. They spoke about the film to the press during the recent junket.

Question: How did you guys find these characters? Was it all in the script? Did you go back to earlier Star Wars films for inspiration?

Diego Luna: It was a mixture of everything. At the beginning, I started just with the script that was already interesting enough for me to kind of dig into myself and find this character inside me. You need to do the military training, and understand something of what it is to be a solider, but you also have to establish a parallel to this galaxy far, far away and the world the live in.

I spent two weeks with this ex-military guy in London, just taking about experiences and about the last 10 or 15 years of his life, and that gave me enough material to form a foundation. Then you go back to the movies. I love Star Wars, like most of us do, and A New Hope is probably the first film I really connected with, so I would go back to that film to find a connection again.

Q: Star Wars has always been very black and white as far as heroes and villains go. You guys are operating in a real gray area.

DL: We live in a different world today. If you revisit all the films, it’s kind of like a stamp of what was going on and a reflection on the world as it was when they were released. Ours has to do the same. And we live in a diverse world where racial and cultural diversity is in fact making us richer and more interesting. But it is a complex world, and making the right choice many times looks horrible. These people are in war, and they make mistakes and they have to make hard choices sometimes. They are the heroes we can be, just regular people doing amazing stuff. No special powers, no Jedis, just conviction and teamwork and that hope of actually being able to shape the reality we live in. Their mistakes, those times when they touch on the darkness, it shows us that our own mistakes can be overcome. It brings them closer to our world.

Q: Alan, you were on the set in a motion-capture suit. What was that performance like? What was like being on set with everyone who was in character and you were kind of removed from it a bit?

Alan Tudyk: Diego is very funny about certain aspects of my “costume.” I was wearing a full body jumpsuit, and I’ve done that a couple of times before, but it’s still such a new technology. The approach depends on the production. Sometimes people wear cameras on their heads, sometimes there’s dots all over their face, or they have balls all over their suit. The way that ILM did it, I wore a suit that was very comfortable. Like a luge outfit. Then I was on stilts, so I was 7-foot-1. I towered over everyone most of the time. That was great; at that height, it colors how you move and helped me get into character. It was fantastic.

AT: It was basically just acting, but then the makeup and the costume came later, in the computer. But because you’re on set, you are able to create a character with the other actors. Without that, you can’t tell a story with the true character who can react in a moment. With some of the stuff Diego’s throwing at you, you need to be able to throw it right back.

DL: They tell you that you’re going to do a science fiction film, or you’re gonna, work with droids, so you have the feeling you’re just going to have to imagine everything. And here we were interacting with an actor and making choices on the way. It took time though. For the first month we just couldn’t look at him because he did look ridiculous with this outfit. It was the tightest pajamas ever, and because he had the stilts you were always at eye-height to his balls. When he had to run there was a version of him that it was just a backpack, with the face of K2 on the top. But it just looked so cheesy, like they went for the low-rent version at the last minute. That was a challenge. But teasing aside, you need someone like Alan on that, because he could help you see this character, this droid, and get you to respond to right way. Then when you see the whole film, and see the actor in this character who the effects have fully brought to life… it’s magic.