In Memoriam: George A. Romero

Jul 17, 2017 Creepshow, Dawn of the Dead, George A Romero, Martin, Night of the Living Dead, The Crazies, The Dark Half, zombie apocalypse, Zombies 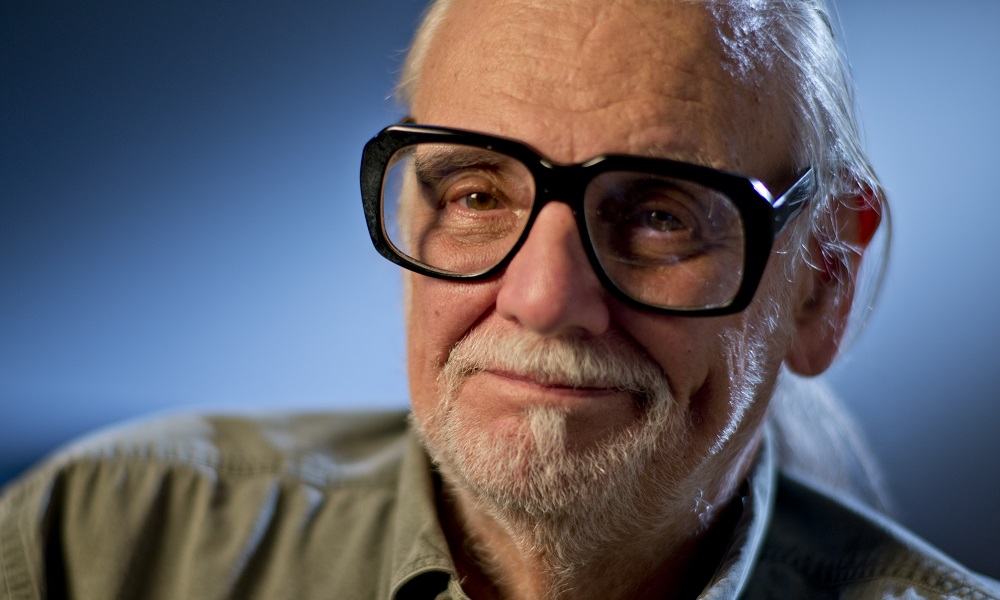 It was February, 2008, and George A Romero was in LA to promote his latest zombie epic, Diary of the Dead. Talk inevitably came around to how he got the idea for the film that defined his legacy, Night of the Living Dead. Where did he come up with the concept, this notion that literally changed the face of horror? He smiled rather sheepishly at the question and said, “Frankly, I ripped the idea for the first film from a Richard Matheson novel called I Am Legend.”

There it was, laid open before us: the inventor of the zombie apocalypse casually noting that someone else – someone he regarded as much smarter than he – gave him the inspiration.

Romero, of course, followed no one in the genius department, and while the kernel of the idea may have stemmed from another source, what he did with it was wholly his own. But the comment reveals a great deal about the man behind the zombies, a man whose brand of brilliance came with a healthy dose of self-effacement. He loved the movies and he loved the fans, but he seemed a little perplexed as to how he’d set it all in motion: like Mickey and the broomsticks, it all seemed like this grand fluke to him.

“I thought I Am Legend was about revolution,” he continued. “And hey, if you’re gonna do something about revolution, you should start from the beginning. Richard starts his book with one man left and everybody else in the world as a vampire. I thought, ‘Hey man, we could start at the beginning, tweak it up a little bit.’ And I couldn’t use vampires because he did, but I wanted something that would be an earth-shaking change. Something that would really get at the heart of all this shit we deal with. So I thought, ‘What if the dead stopped staying dead?’”

Anyone familiar with his work understands exactly what he means. The zombies menacing his ensconced heroes in all six of his Living Dead movies really weren’t the point. They were simply an interesting way of putting stress on the system and watching how human beings react when the safety rails are removed. (The answer was invariably, “not well, but there are a few of them/us worth rooting for.”) It was simple, straightforward and creepy as hell. It didn’t take a lot of money to effectively put on screen, and in the beginning, he just wanted to tell an interesting story that made his investors’ nut back. And yet here we sit, amid countless zombie movies, TV shows, comic books and articles in freaking Forbes because this amiable dude from Pittsburgh had an idea for a low-budget horror flick.

The delightful thing about Romero wasn’t just his sheepishness: that smiling, almost guilty dismissal of his own creativity. It was how much of his energy went into the right places: the work, the fans and the ideas at the heart of it. He never reveled in the attention, at least not the excess adulation that figures such as he often receive. But he loved talking about the ideas he helped foster. The nuts and bolts of our behavior under stress, the difficulty in doing the right thing in tough circumstances, the way we retreat to tribalism and barbarity when the chips are down… his hands would move animatedly when such subjects came up, he’d get a little gleam in his eye, and the sheer enthusiasm for the notion would all but overwhelm him.

You could sense it in his eagerness to heap praise on some of the filmmakers who followed him, or friends like Stephen King, rather than go on about himself. He’d chuckle at mention of Edgar Wright’s Shaun of the Dead before gushing about how amazing it was, while King served as co-conspirator for two of his other films (the marvelous Creepshow and the surprisingly effective The Dark Half) that he would use to praise his buddy rather than pat himself on the back.

That gave his movies their signature punch, particularly the first two Dead films which today rank among the greatest horror films of all time. He wasn’t worried about how many people saw them. He wanted only to make sure they were worth seeing. Fame and fortune were strictly side-effects… which he never seemed entirely at home with. He never “went Hollywood,” trading in his vision for bigger budgets and studio oversight. He stayed close to his adopted hometown of Pittsburgh, accepting the limitations of low budget filmmaking and staying true to his roots.

Nor was he shy about his disdain for Hollywood business as usual. “Whenever I come out to L.A. and pitch something to an executive,” he said. “They always want to know what the story is. Well, you can do the story fifty different ways: the hero’s black, he’s white, he’s a woman, you pick ’em. But it has to be about something, and they never want to hear that. You say, ‘This is about mistrust,’ and you get a lot of head nods. ‘All right,’ they say. ‘So what’s the story?’”

He blew off such imbecilic acrobatics in favor of his own notions, which stretched well beyond the Dead movies into similar (if lesser known) horror entries like Martin and Monkey Shines. He even branched out into something very different with 1981’s Kightriders: the story of jousting “knights” on motorcycles trying to live according to Arthurian ideals in a modern age. (It wins points on sheer originality, and in the ways it circles back to Matheson: its heroes fighting to live by a code that the world has completely passed by.)

You’d never get the concept through a big studio – not in the version that finally reached theaters – and that was kind of the point.  Romero was in the game for all of the right reasons, and because he avoided the sausage factory in Hollywood, his films could find the funky groove that corporate-approved groupthink couldn’t. Their grungy “let’s put on a show” aspect became part of the appeal (aided by stalwart co-conspirators like King and make-up legend Tom Savini), as well as allowing them to deliver social commentary that you simply couldn’t get away with in movies that required a bigger return on a bigger investment.

That’s also why so many of the filmmakers who followed him never quite captured the same lightning in a bottle that he did. The smart ones stuck to the low-budget grindhouse (Dan O’Bannon’s Return of the Living Dead comes to mind, as does Danny Boyle’s 28 Days Later), while those married to the studio found short-term relevance at the expense of being quickly discarded. (Anybody prefer Zack Snyder’s Dawn of the Dead remake over Romero’s?)

Like all great art, Romero’s work came from his own sensibilities, and in the process shone a light on what it means to be human. He never apologized for it or changed his habits, and being a horror icon never felt quite right to him. He was just this cool guy who liked to make movies, and a couple of them quietly and completely turned an entire genre on its ear. Respectful fans have wondered how appropriate it would be to make zombie jokes in light of his passing. He’d probably laugh as loudly as anyone at them: one of cinema’s true visionaries who treated it all like a colossal gas, and was likely better off for it.