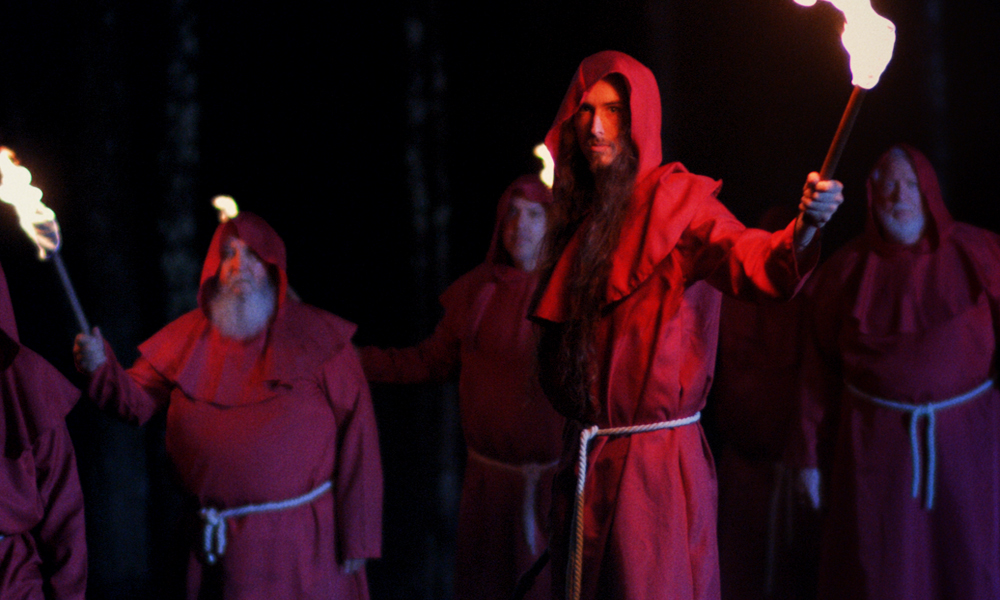 Hallowed Ground is a horror movie about a married couple Alice (Lindsay Anne Williams) and Vera (Sherri Eakin) who stay at a secluded cabin to work on their relationship after an affair rocks their marriage. While there they re-ignite a blood feud between the cabin’s Native American owners and a neighboring cult whose obsession with their land demands the lives of those who trespass. 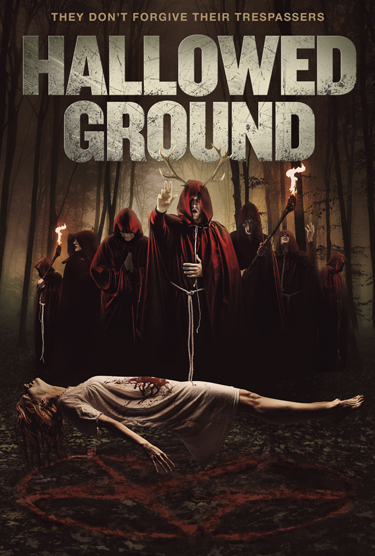 I enjoyed Hallowed Ground for a portion of it’s run time. The opening and character introductions left a bit to be desired, but once the action and story picked up, it kept and held my interest, even when I felt there were missteps and what I can only describe as faults with the story.

The first problem I had was with the dialogue. Its pacing was inconsistent and awkward. Which could be beneficial in scenes where the couple Alice and Vera are interacting. Odd pacing can sometimes enhance the feeling of strained tension between two lovers, who are having a hard time connecting and with the couple, it works.

However, this timing and pacing happens with the property owner Nita (Mindy Van Kuren) and her groundskeeper Sandy (Ritchie Montgomery). With Sandy, it kind of works, he’s an old timer who is trying to interact with this couple who seem to be put off by his presence. His pauses seem to go on too long for comfort and slow the story down. Nita on the other hand, her character is supposed to be a Native American and her clipped way of talking is distracting. The pauses and breaks go on far too long, like a bad joke whose terrible punchline we’re forced to wait upon. The pacing and dialogue pick up as the movie goes on for all the characters, except for Nita. Which is probably why I don’t like her character.

The second problem is the main characters seem to have unexplained shifts in their personalities. That come about spontaneously and not through development. For example: After fighting for the first part of the movie, Vera, described as a cold fish, is finally in the mood after having visited the native burial ground on the property. While they’re enthusiastically making-out the ladies trip and Vera cuts her hand on the barbed wire fence separating the two properties.

As if on que the owner of the property shows up at that moment and have what seems to be an awkward, yet civil conversation. Later we find out Bill, is the sheriff of this community and leader of a cult that worships ‘The Dragon,’ and he demands human sacrifices to atone for their trespassing. But, in this first scene with him, he shows no signs of being particularly upset and insistently helpful.

But, the hardest character shifts to overlook was the cheating spouse who is best described as selfish, Alice, who in one scene moments before doesn’t seem to care about either her wife or lover, suddenly chooses to act selflessly, out of the blue and the character who seems to be the least emotional and numb from being cheated on Vera, suddenly makes a plea to save her wife’s lover.

Not all the shifts in characters were necessarily bad. When we first meet the cult leader Bill, though his behavior makes him a bit off-putting, he at the same time seems to be courtesy and even caring. You would not think he was angry about the trespassers on his land at that moment. But, as time goes on you get the sense the man has a sense of morality, a warped one from our morality, but he is in his own way moral.

This gives Bill some depth as a character. He calls the relationship between Vera and Alice unwholesome, but at the same time he doesn’t seem to be all that bothered by it. It’s not a sticking point for him and even later seems to hold them in higher esteem than Alice’s boyfriend.

Writer/Director Miles Doleac’s character Bill Barham is by far the most entertaining character of the film. His earnest dedication and stern countenance while wearing an antler crown tickled me on so many levels. I must also admit that his antler crown is one of the greatest pieces of headgear I have ever seen put to ‘film.’ Seriously, I want this crown and am adding points to this movie for it’s awesomeness.

There is some gore in the film, but it’s minimal and most of it is at the beginning of the film. The most disturbing bits seem to involve animals. There is a ‘dead cat’ that is being carried around by Bill’s son, but to be honest, it didn’t look incredibly real. In fact, that was the biggest complaint I have about the effects, it looked like a stuffed cat my brother had as a child, only covered in blood. The soundtrack for the film was decent, didn’t get in the way and added to the atmosphere. I enjoyed the end credit song.

Overall, despite what I felt was a weak opening and a possibly predictable end, Hallowed Ground was a good film. I would love to see more of Miles Doleac’s work. Despite my dislike of the character Nita, it didn’t seem to be the fault of the actress. Everybody in this was either well-acted or directed. Sound and design were good and dialogue crisp, just oddly paced at times.