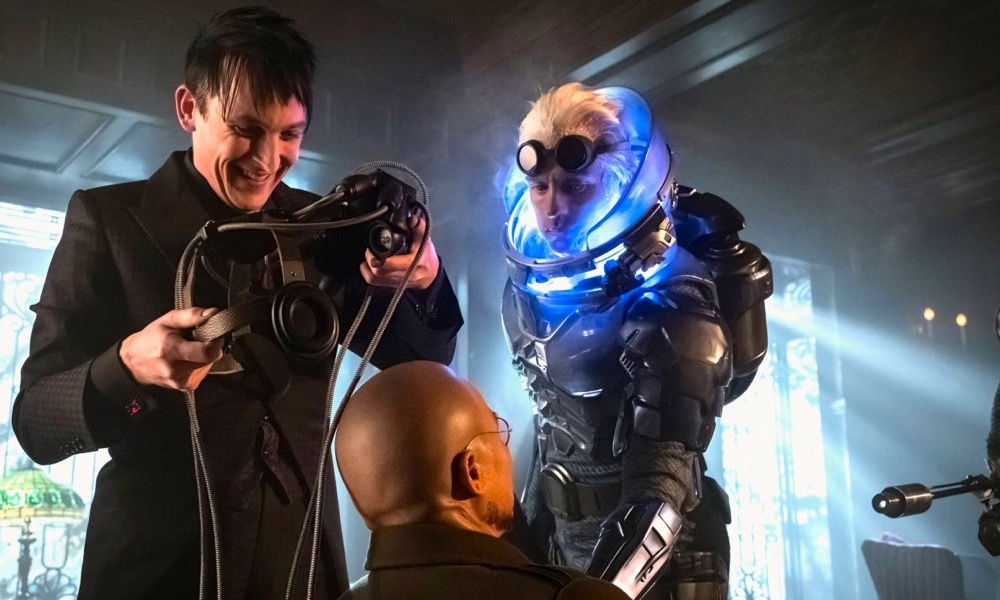 The season 3 finale of Gotham showed a series in transition, sweeping away some of the old in order to make room for something new.

It’s hard to take Gotham seriously sometimes, make that all of the time. In light of recent additions to comic-based series on TV, namely Marvel’s Daredevil on Netflix which has come along and reset the standards for the genre, shows like Arrow and Gotham come off a lot more like a parody or even camp by comparison. That’s because both shows insist on remaining more faithful to recreating the experience of reading a comic book instead of trying to do a more realistic, real-world version of the stories they tell.

This includes dialogue and other ways the shows remain more tongue in cheek. They attempt to straddle the line between serious drama and a comic book-like experience, and the comic book part of the formula wins every time. Another thing is, the characters nearly never die, and when they do, it often turns out they actually haven’t, or find some way to return from the grave, which hardly ever happens in the real world. If you are going for grim and gritty, you need to kill off someone once in awhile.

As I mention in the headline, Gotham is showing signs of a show in transition. They are getting rid of some of the old characters and storylines, which indicates they intend to give the show a makeover, at least to some degree, in season 4. I welcome the change. I noticed the series about the dark city has failed to delight me as much as it did in the past and that some of the show’s elements have begun to seem a bit stale lately.

The finale certainly was an eventful pair of episodes with so many storylines in the fire to wrap up or modify. Delivered as two episodes jam-packed with events it ended up seeming like a bloated attempt to get everything and every character included. The show insists on focusing on Jim Gordon as the central figure of the events that transpire, sometimes to its own detriment because Jim is kind of a boring character sometimes within the context of the more colorful citizens of the city he lives in. It’s little wonder I find myself rooting for the bad guys more often than not when watching the show.

The show insists on focusing on Jim Gordon as the central figure of the events that transpire, sometimes to its own detriment because Jim is kind of a boring character sometimes within the context of the more colorful citizens of the city he lives in. It’s little wonder I find myself rooting for the bad guys more often than not when watching the show.

Following the release of the virus bomb, Gotham is in chaos, there are random fires everywhere and the opening had a nice shot of an elevated train going by with some flames and lots of smoke billowing from the windows. To illustrate just how bad things have gotten, the show depicts a little old lady her face hidden asking for her savings at a bank only to remove her concealing scarf and revealing the tale-tell signs of being infected when she goes from quiet granny to gun-toting maniac.We are reminded the virus endows its victims with enhanced strength

Jim (Ben Mckenzie) is infected but somehow still in control of his raging impulses to behave in an insane manner, he and Bullock (Donal Logue) are trying to get a handle on the situation and wondering what to do next. Bullock relieves Jim of his firearm but stops short of taking him off duty.

Meanwhile, Bruce (David Mazouz) is in custody and Alred (Sean Pertwee) is there with him attempting to deprogram him from his cult programming by reminding him of the all of the things that the Shaman (Raymond J Barry) left out of his conditioning. There is a distraction of a cop shooting up the precinct and Alfred jumps him to put a stop to it and Bruce escapes while he is gone.

Lucious (Chris Chalk) shows up and it seems there’s hope for an antidote that should put an end to all of the crazy town stuff. It all hinges on Hugo Strange (BD Wong) Lucious joins Alfred in tracking down and following Bruce. With the revelation that Strange may have an antidote, it becomes a race to find him with competing groups all seeking the elusive scientist. Barbara (Erin Richards) teams up with Nygma (Cory Michael Smith) again who is still obsessed wth finding and killing Oswald, but he agrees to help her out for the day before rejoining his hunt for vengeance.

Meanwhile, Butch (Drew Powell) and Tabitha (Jessica Lucas) are fed up with Barbara and scheme to get rid of her. Fish (Jada Pinkett Smith) is the first to find Strange as he attempts to leave town on the earliest way out of town and whisks him away.

Lee gives Jim a booty call to let him know she wants the bad boy version of him to come over and get some. Tracking Strange down to the train station they arrive too late but Bullock gets a tip where they can find him and they get the drop on Fish who refuses to give Strange up. She has an ace up her sleeve in the form of Mister Freeze (Nathan Darrow) and Firefly (Michelle Veintimillia) who shift the advantage to the criminals. They leave Jim and Bullock trapped behind a wall of ice.

Strange is next shown bound in a chair being threatened by Freeze and Firefly when they are interrupted by Oswald. Surprisingly, instead of killing him Fish has made him her partner. Go figure. He attaches Strange to the same device he used on him and tortures him for a while before they go get the antidote.

After retrieving the antidote Fish and her companions are confronted by some of the League of Assassins who demand the antidote for themselves, A fight breaks out with Freeze and Firefly holding their own against the ninja horde when Jim and Bullock arrive in the middle of the melee. Jim goes berzerk and his enhanced strength and crazy power allow him to actually get the better of the ninja assassins.

He is shown killing several of them, but at the end of his frenzy he unintentionally stabs Fish and kills her. Jada really gets to ham it up for her death scene. What a surprise they chose to end her in that manner, by Jim’s hand. It seemed odd that the virus also transformed Jim into a master swordsman.Oswald actually mourns Fish and seems really broken up over her demise.The antidote is destroyed when Fish drops it.

Next, we join Barbara, Nygma, Tabitha, and Butch as they snatch Tetch (Benedict Samuel) from a transport and kidnap him for his blood which is needed to make more of the virus and the antidote. It’s part of Barbara’s play for power. Coinciding with this is Bruce’s arrival at the demon’s head which turns out to be literally a demon’s head carved into an ornate doorway. he is confronted by more ninjas, who are part of the entourage of Ra’s al Ghul (Alexander Siddig) who introduces himself as the one promised to arrive by the shaman. There is a glowing green pool of liquid I assume is the Lazarus pool, and indeed it is.

Alfred is brought in, having been captured by the ninjas and Ra’s tellsBrucee to kill him with a  gigantic sword he offers him to use for that purpose. Bruce is obviously torn about what to do but actually stabs Alfred though the chest with the sword, and immediately snaps out of his conditioning when he does. He is angry and attempts to do some damage to Ra’s as well, but the mysterious figure vanishes. The entire scene with Ra’s was anti-climactic and disappointing. It lacked any of the drama it should have been oozing with for such an important character

In a panic, Bruce looks around desperate to undo what he just drone, and some instinct compels him to grab a handy dish of the liquid from the pool and pour it on Alfred’s wound, which restores the faithful butler to life. Bruce somehow gets him to a crowded emergency room and its enough to save Alfred’s life.

While Bruce waits, Selena (Camren Bicondova) shows up because she heard about what happened to Alfred and Bruce has some harsh words for her. She leaves pissed off that he is being such a jerk. It looks like Bruce has burned that bridge down for good.

Jim and Bullock get into a shootout with Barbara and the others over Tetch and when faced with the dilemma of getting away with him or getting shot, Jim chooses to cut his neck and collect a big jar of his blood to help make the antidote. It looked as if Jim had killed him, but it turned out he hadn’t.

It’s not only a story of endings, it’s also a story of new beginnings. Barbara catches on to Butch’s scheme to kill her and shoots him in the middle of his forehead. Again I was convinced he was dead, but he is shown later in a hospital bed, while some of the hospital staff around reveal his real name is Cyrus Gold. That, of course, is the name of Solomon Grundy, which implies we haven’t seen the end of Butch but hat he may return in a new form next year. Could it be Hugo Strange gets his hands on Butch?

Tabitha encounters Barbara who confesses she killed Butch, and they have a big fight with Tabitha eventually emerging victorious. Barbara is killed when she is electrocuted to death. Later Selena is shown showing up at the bar and looking to change up her game. It looks like Tabitha is going to take her under her wing after Selena shows a natural talent for using the whip.

That leaves Oswald and Nygma’s feud to be resolved and it looks like Nygma has once again gotten the upper hand. As he is about to kill Oswald it turns out Oswald has been playing hm all along only pretending to have been outsmarted again. He has Freeze, Firefly, and Ivy for back up when he turns the tables on Nygma. he has Freeze do his thing and turns Nygma into a frozen trophy as a reminder of his mistake. It’s revealed he is planning to open a new nightclub which he says he will call the Iceberg Club. Sounds familiar somehow.

The show ends with a mugging that strongly resembles the event that set Bruce on the path of becoming the Batman, but this time someone intervenes before tragedy strikes, A masked individual attacks the mugger and beats him unconscious. It’s Bruce, who has apparently decided to become a vigilante and beat up bad guys when they decide to do bad things. He is shown standing on a rooftop looking out over the city at night looking very much like the man we all know will become.

The finale was disappointing in several ways and quite entertaining in others, it gets points for having a couple of actual deaths this time around, and loses points for the not very good Ra’s al Ghul scene. So long Barbara and Fish, it was nice having you around while it lasted. There were a lot of things that I just didn’t understand, like why would Fish make Oswald her partner? And how did Jim become a master swordsman? The whole episode seemed a bit overly contrived and left me feeling somewhat disappointed for some reason. Oh well, maybe the show will get back to being as good and enjoyable next season.