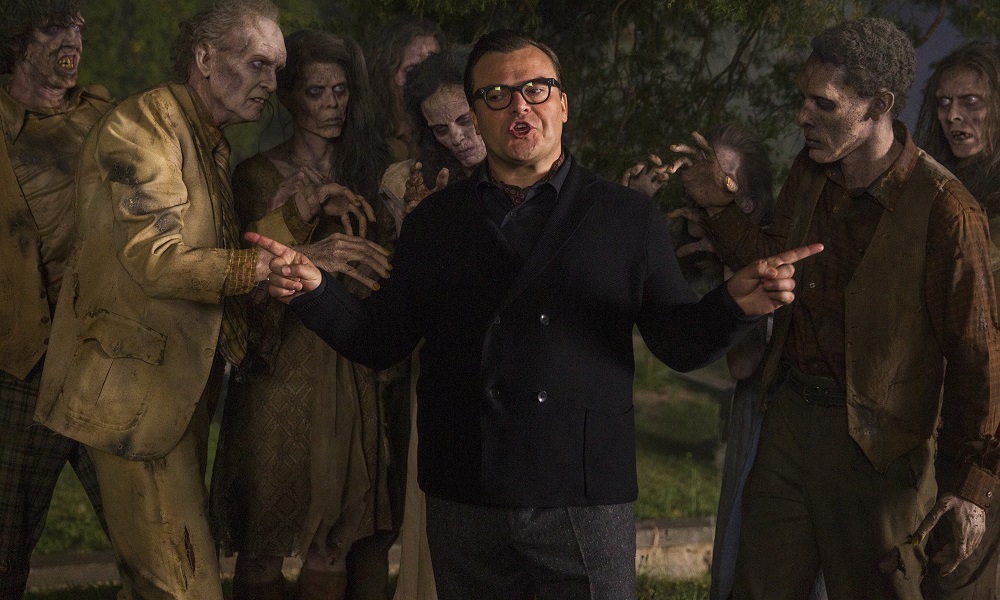 I can’t claim to have read the Goosebumps books, having come of age well before they left their imprint on a whole generation, so I can’t speak about their merits or flaws. But having now seen the wonderful little movie based on them, I think I understand their appeal. It makes a surprisingly sweet gateway drug to more grown-up horrors: delivering frights with just enough gentleness to remind the sensitive that it’s all in good fun. It doesn’t break any new ground and relies on standard genre tropes (an evil ventriloquist’s dummy, a creepy abandoned carnival, etc.), but presents them in such a way so that young first timers will open their arms to the scarier versions gleefully. And it does all that while remaining resolutely entertaining from beginning to end.

Its central concept stems from In the Mouth of Madness, with a self-referential wrinkle. In this case, Goosebumps author R.L. Stine (Jack Black) can actually bring his words to life, leading him to lock up the original manuscripts of his various books before the creatures in them can menace the nearby locals. When one freshly minted local (Dylan Minnette) inadvertently sets them all loose in pursuit of Stine’s comely daughter (Odeya Rush), it’s a race against time to save the local town from a growing gaggle of ghouls.

That gives the movie a chance to revisit some of Stine’s greatest hits without just awkwardly shoveling them in our faces. It soon settles on Slappy the Dummy as the leader of this monstrous army, and Jesus fuck he’s creepy. He helps make the scenario menacing enough to support some quiet scares and yet definitely keeps on the lighter side of things. There’s an inherent ooginess to the various threats, but they all arrive with tongue planted firmly in cheek and a blast of Danny Elfman music to keep their goofier elements front and center. And while the CGI reflects its middling budget, the effects all come equipped with enough personality (a werewolf wearing gym shoes, for instance) to lend them some charm.

Black plays big dividends on that front as well. He needs the right material to really shine on screen, and there’s nothing more frustrating than watching him struggle with a part that doesn’t quite fit. But the onscreen version of Stine gives him an ideal combination of manic energy, winks at the camera and just plain weirdness to hit the sweet spot. His young cohorts are uniformly likeable, and throwing the occasional bully or two into the maw of the monsters feels like appropriate come-uppance more than anything truly dark.

As a result, it has a fantastically good time with its concepts, while presumably striking the tone that fans of the books are looking for. It stresses the need for a twist a little too much, and its self-referential status can’t entirely hide the creakiness of its core concepts, but it takes so much joy in what it’s doing that it scarcely matters. Black reels you in, and the overall vibe holds the innocence of vintage Joe Dante, something we’ve sorely missed these post-torture-porn days.

That makes Goosebumps a first-rate example of what happens when you respect the material, and how readily fun can be conveyed if you just stop pandering. You have to get on the film’s wavelength a bit, but I suspect the same holds true of the books, and if you let it in, the rewards it provides are more than worth it. We’ve been overdue for a solid horror film this Halloween. Who know that it would come in such a family-friendly package?