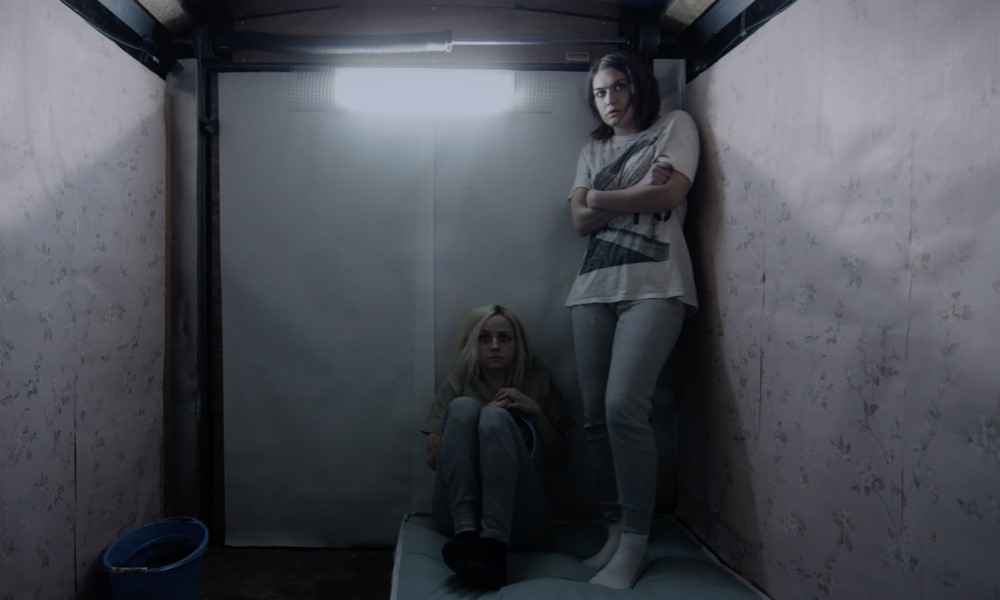 Goodbye Honey is the title of an abduction thriller. About a girl who escapes from an abductor and the woman she encounters who is either a sadist or too stupid to be real or to actually be any help to her. 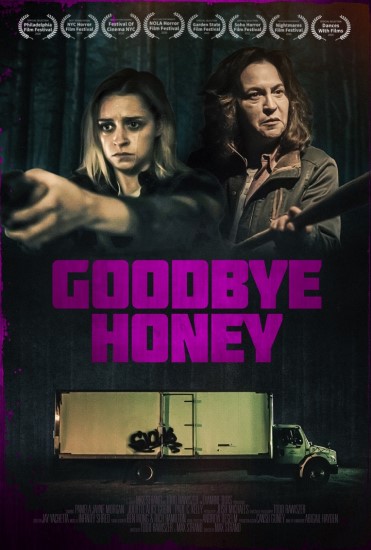 Following the minute-long obligatory cliché cold opening about somebody the audience has no clue about, we are introduced to Dawn (Pamela Jayne Morgan), who after a thirty plus hour day stops at a state park in the middle of nowhere to rest. Dawn is a truck driver, well, she is a mover who owns and drives her box truck which she uses to move people’s stuff.

I know it is a fine point to try and nitpick apart, but the first half of this movie is so stupid one has a lot of time to consider how absurd her truck driving career is and how bad she is at her job or at life really.

Dawn is taking a rest after a thirty-hour day. Her rest is interrupted by a woman, Phoebe (Juliette Alice Gobin) who tries to break into the truck’s cab where Dawn is sleeping. Dawn successfully repels Phoebe’s attempt at unlawful entry.

Phoebe begs Dawn to call the police, while Dawn takes a phone call. Where just a moment Dawn was freaked out by this mysterious girl who appeared out of nowhere in the middle of the night and Dawn is now just annoyed by Phoebe’s interrupting pleas to call the police.

Dawn alternatively ignores and berates Phoebe. Phoebe manages to steal Dawn’s phone and run twenty feet away from the truck. Phoebe, possibly by accident, breaks Dawn’s phone. The scene is a little vague, but this angers Dawn. Phoebe threatens Dawn with what is essentially a nail, or giant thumb tack or a couch button.

This move causes Dawn to allow Phoebe into her cab, where Phoebe informs Dawn she had escaped being locked in someone’s trunk and begs Dawn to drive away. Dawn is underwhelmingly freaked out and cannot find her keys because she dropped them in her straight line twenty-foot walk away from her truck after Phoebe.

After a minute or two of non-urgently wasted time Dawn decides to look outside the cab for her keys, not anywhere near where she confronted Phoebe, but around her truck. In places Phoebe had not been and Dawn had not explored since she arrived at the state park.

Dawn has not found the keys, but Phoebe has found Dawn’s baseball bat and manages to threaten a grown woman into the cargo bay of her own unlocked truck. Yes, this “truck driver” had no lock on her backdoor, you know, to protect her client’s stuff from being stolen while she slept or was stopped. It’s common practice.

Inside this large truck, there is barely any stuff, in fact most of the stuff is haphazardly packed and could have been mailed or transported in a smaller truck. It is a nit-picky point, but if you’ve ever moved anywhere or packed a truck in your life, you’d recognize how badly this truck is packed and loaded and if you’ve ever paid anyone to move, you’d recognize this truck’s size as overkill.

Phoebe manages to coerce Dawn into the back of the truck under threat of violence, from a baseball bat. Dawn somehow gets into the back of her truck, in the middle of nowhere, threatened by a girl holding a bat. A scenario any normal person’s brain would scream: “Danger. Possible death. Run or fight. Danger.”

Anyway, this contrived situation is so our characters can be stuck in the back of the truck together. A place they can talk and be scared by people who arrive at this park in the middle of the night. An encounter that is stupid an happens thusly: Dawn encounters stoners who even after her bipolar abuse allows her to use their phone to call the police. Dawn literally hangs up on the police when she sees her truck has been vandalized. Dawn proceeds to berate the stoners who she believes are Phoebe’s abductors. Again, she hangs up on the police because these “adductors” vandalized her truck. Hangs up to yell at them.

The stoners take the phone and baseball bat away, antagonize Dawn a little and throw her in the back of the truck. Returned to the cargo bay of the truck Dawn and Phoebe talk about Phoebe’s abduction.

This part of the movie is not great, but in comparison to the first half makes more sense. Not a lot, but it is a far more compelling story than what we had just been forced to sit through. It is also a lot less dependent on dialogue. More show than tells and it sets up Phoebe’s abductor, not brilliantly, but at the least with more believable motivation and character development than Dawn received.

After this ten- or fifteen-minute intermission of a flashback we are transported back to the present where Dawn has finally grown some humanity or brains. We are treated to a coincidence that feels so unbelievable and contrived that we should shut this movie off and never watch another movie ever again but whose stupidity is so eclipsed by the first half of this film, the contrivance gets a total pass as “who the hell cares?” at this point.

I just want to say, the writing on this movie is weak or bad. The characters are flawed in the wrong ways. They are dumb, which is necessary sometimes in horror movies, but in thrillers not so much. But, even in a character’s ignorance there should be some kernel of something resembling common sense present otherwise the character moves from character into cliché caricature. Unfortunately, this is what we have in Goodbye Honey.

The acting was good, but the script not so much. The first part of this movie before Phoebe’s tale, if it had been badly lighted or directed would have been unwatchable. The second half improved, but after fifteen minutes in I was ready to do something else. It sounds cliché, but stare at a blank wall would have been more appealing.

Because of the points listed, I am going to have to give this a 40/100. The acting was good for what it was, technically and mechanically Goodbye Honey looked okay, but the characters and dialogue, were bad. The second half got better and even compelling, but by this point it was too late. The score is to mimic the unbalanced teeter totter nature of this experience. Avoid this one.