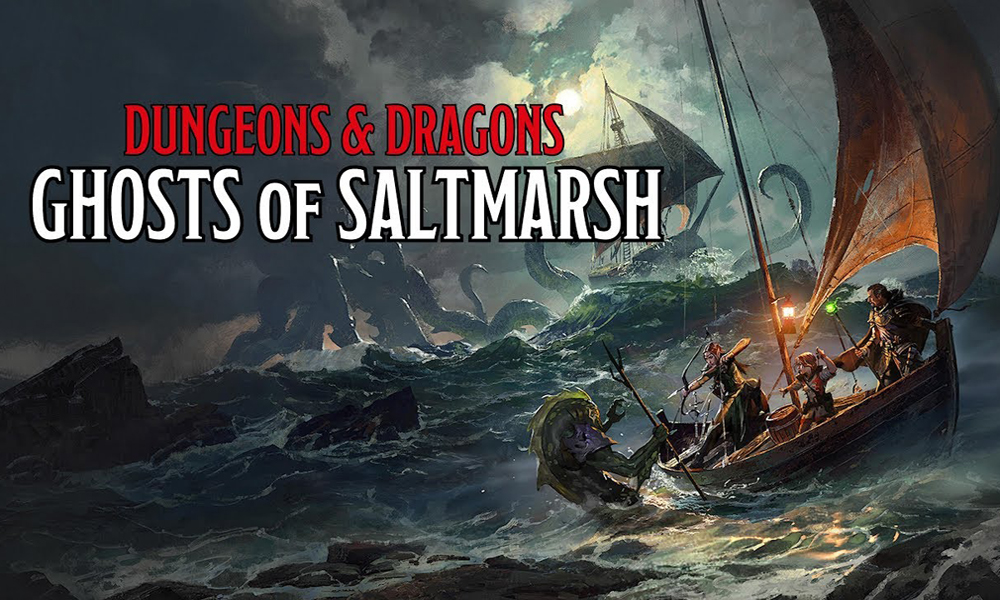 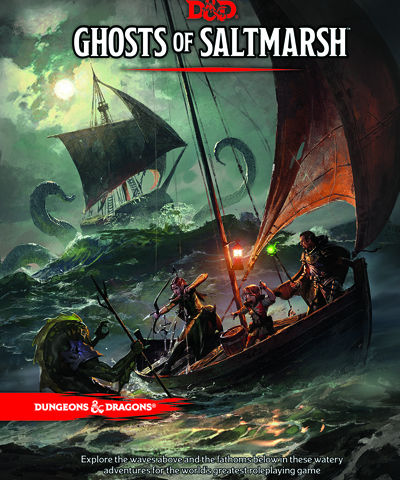 1981 called “The Sinister Secret of Saltmarsh”. The module adventure was one of the best beginning level modules that TSR (then the publisher of D&D) had ever created. Now, nearly 40 years later Saltmarsh is back in a decidedly more epic adventure in this 256 page hardcover book from Wizards of the Coast.

The book features seven different adventures which can be played as one massive adventure or they can be played as standalone adventures. The progressively tougher adventures are designed to advance characters from 1st level all the way to 12th if you run the gamut. The book not only includes the original Sinister Secret of Saltmarsh but also its two original sequels “Danger at Dunwater” and “The Final Enemy”.

Saltmarsh was unique at the time for its Oceanside setting and featuring a lot of aquatic enemies that you don’t normally encounter in the usual dungeon crawl type of adventures such as the Sahuagin, a fish-like humanoid race that live in oceans, seas, underground lakes, and underwater caves and the Koalinth, and aquatic version of Goblins. The setting also featured a haunted house and a ghost ship which the PCs will tackle in the opening adventure. These types of threats are out of the box and present unique challenges from the usual and it is one of the things that always set the Saltmarsh modules apart from others back in the early 1980s. 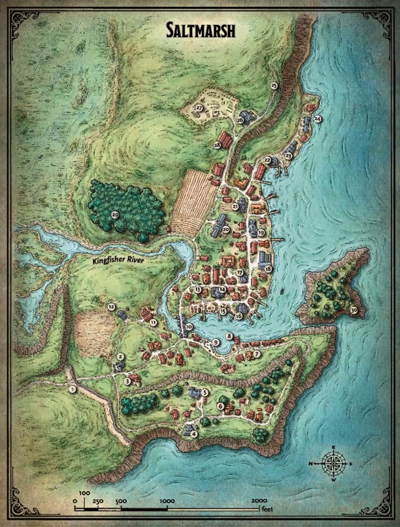 The games designers expand greatly on the original modules by going into great detail about Saltmarsh, its politics, details about all the locations of the town, points of interest, side activities as well as an entire chapter devoted to sailing and outfitting ships, sea combat, and mysterious islands and locations. These are essentially randomly generated encounters that provide the Dungeon Master the basic framework to create their own unique side adventures in the Saltmarsh area. Honestly there is so much here that your players could make Saltmarsh their base of operations for quite a long time.

As I read through the various adventures I found myself wanting to roll up a character and jump into Saltmarsh with a party of adventurers. Even a novice DM should have no trouble making this a notable and long-lasting campaign just by following what is in the book. The depth of detail in the description of each room or location and the incredibly detailed maps should make this a treat to play no matter what side of the DM screen you are on. What the players “see” when entering a room is highlighted in light green so the DM can provide a vivid description. Of course the best DMs are those that can add their own flavor to an adventure, and that has always been the appeal of D&D.

So $50 is a lot for a hardcover but when you think about it…the modules back in the 1980s usually cost anywhere from $7 – $15 each depending on its size and when it came out so seven adventures alone with all of the background information is a pretty good bargain actually. And if your players maybe areal ready in the 6th level range s you’re thinking that only half the book will be useable all you really need to do is increase the difficulty level of the early adventures. Nothing with the setting needs to be changed.

One thought on “Ghosts of Saltmarsh – Adventure Game book review”