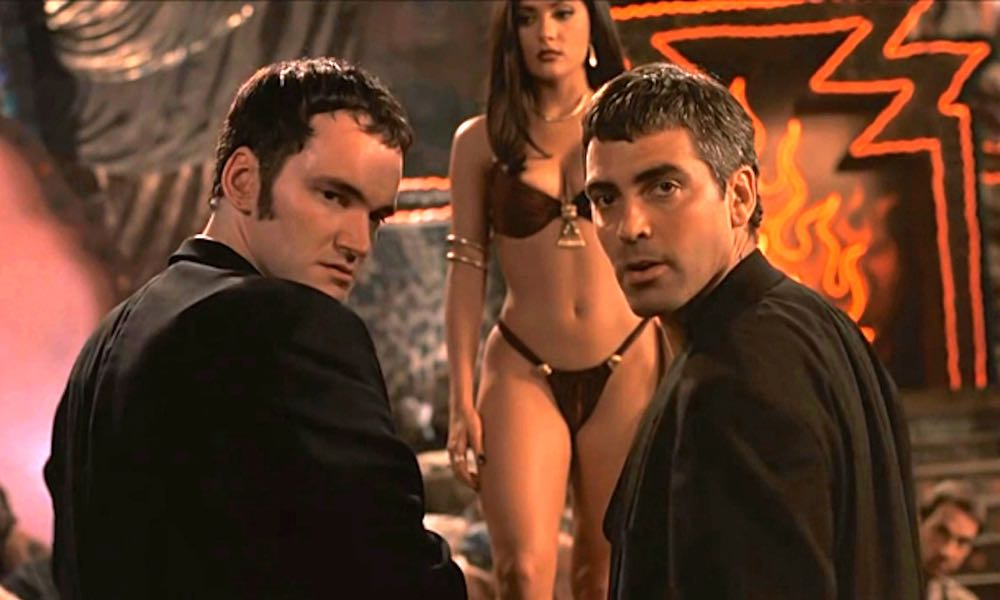 Robert Rodriguez’s retro-styled From Dusk Till Dawn is a tribute to the ‘B’ grindhouse (or drive-in) films of the seventies, and it looks it to the point of nearly being indiscernible from the real thing. It’s no secret that Rodriguez and Tarrantino are in love with these types of movies hailing from the seventies. Seriously, the people behind this movie went a long way to make this film seem as much like a seventies grindhouse thriller as it is; it looks like it, feels like it, and even the dialogue appears genuine (written by Quentin Tarrantino). The film goes so far in its imitation of the seventies style of cheesiness so convincing that I had to keep reminding myself this film is not that old.

Briskly paced and very entertaining, From Dusk Till Dawn wastes no time unfolding its tawdry tale in the form of a crime drama that introduces two criminal brothers on the run as two of its principal characters who provide the film’s premise, at least it seems that way. This film’s narrative is full of cliches and stereotypes, and, as the film continues in this fashion, more characters get introduced. As the plot develops, the film arranges for their paths to collide inevitably. The film spends its first half teaching and defining the characters and their relationships as they cross Mexico. Once there, they end up at the most prominent, most cliche location of all – the road-house/biker-bar/truck-stop in the middle of nowhere with a huge sign announcing its name as The Titty Twister. While this location and several other things about this film are cliched, this is an impressive set, where most of the movie’s action takes place and where Dusk Till Dawn shifts gears from a cliched crime drama into a cliched horror movie. From Dusk Till Dawn also boasts a terrific soundtrack.

Not familiar with this title? Dusk till Dawn is a 1996 American action horror film directed by Robert Rodriguez and Quentin Tarantino. It stars Harvey Keitel, George Clooney, Tarantino, and Juliette Lewis. In keeping with the film’s tribute to the seventies, the cast includes a couple of stars from that era, like Fred Williamson, a football player who who who transitioned into a blacksploitation movie star. Joining him is Tom Savini, legendary makeup, prosthetic artist, and actor as a whip-carrying badass that enters the fray on the humans’ side. The cast also features a much younger-looking Machete as the club’s bartender. The acting and how dialogue get delivered areare alsareo reminiscent of the seventies style. Clooney is not entirely convincing in his role as the homicidal killer/bad-as he portrays, while Tarantino is believable as the homicidal psycho he represents here.

From Dusk Till Dawn saves its payoff until almost the end of the movie when all hell breaks loose with the discovery that  The Titty Twister is a nest of vampires and that everyone that works there is a blood-sucking card-carrying representative of the living dead. A lengthy fight ensues in which our questionable heroes hold their own against what, it turns out, is an army of vampires in every shape and size imaginable. When the dust settles, the two characters manage to survive.

While not overstaying its welcome, this film does come close to milking its narrative over-long and reaching its conclusion. when it does finally end. It leaves an opening for a sequel by revealing the bar is just the tip of an ancient  Aztec pyramid.