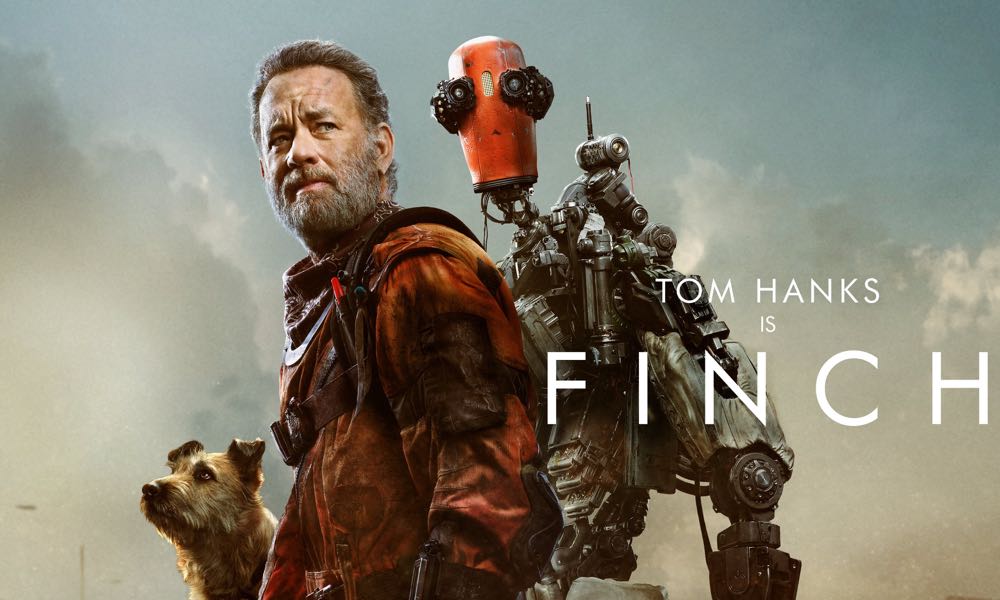 It often falls upon the genre of science fiction for many reasons, for better or worse, based upon what we know now, to paint a portrait of the future. These portraits are not always flattering or pretty but almost always reveal our potential as human beings to adapt and thrive or get swept away when we cannot do so. Finch is a portrait of one possible future we all face if we do not take control of our environment right away before it’s too late.

Finch is an atypical kind of action-thriller for our times, although some would argue that categorizing this film as an action thriller would be misleading. This film could also get described as high adventure, a road trip buddy film. and a sci-fi odyssey, and all of those descriptions would be true. The film only has a cast of two loving creatures, the eponymous Finch (Tom Hanks) and the dog who mostly foes unnamed (his name is Goodyear), unless you count the assortment of electronic devices constructed by Finch, who it turns out is a resourceful engineer that created a surrogate family of robots and computers to fill the vacuum left by the mostly deceased human population. Because this is essentially a one-person performance, I found myself reminded of Tom’s other solo tour de force, Cast Away. He’s just as impressive in this one. However, this film is far more whimsical and intentionally amusing.

The film paints a portrait of a world that has evolved into one gigantic desert with weather that can kill you unprepared, along with an atmosphere that no longer protects from the sun’s dangerous radiation. It’s against this backdrop we get introduced to the film’s Cast. First of all is the film’s lead protagonist, Finch, aging, somewhat grizzled,  ex-engineer with above-average intelligence, who, between scavenging and being resourceful, has managed to carve out an existence in what has become a very hostile world. We meet Finch just as he puts the finishing touches on his latest creation, a robot he calls Jeff. This film spends most of its time depicting the relationship and rapport that gets established between Finch and Jeff (and the dog). Finch is a film with a lot of heart.

Finch is often a very amusing film, but there are more severe themes in play here also. The film could be considered a dramedy, I suppose. A lot of the humor arises from the rapport between the two, Finch as a modern-day Geppetto and Jeff’s fish out of water antics as he learns about the world. This film raised many questions for me about artificial intelligence and the state of computer science before everything went to hell because the tech involved in creating Jeff would have to be way more advanced than anything in existence today. Although he is really sophisticated tech, Jeff is childlike in many ways, and the film works that for laughs. There’s a lot of cuteness going on in this film, but it’s never a; owed to get out of control. Jeff’s voice is a robot voice resulting from what sounds like an auto tuner combined with a voice synthesizer. If that sounds annoying, somehow it isn’t.

The events of the film are steady, and things keep moving along at an easily digestible pace. And the film’s narrative never stays far from reality and does not indulge the temptation for gratuitous sex and violence or a patronizing happy ending. In the end, it’s a nonjudgemental look at a bit of a slice of this guy’s life.