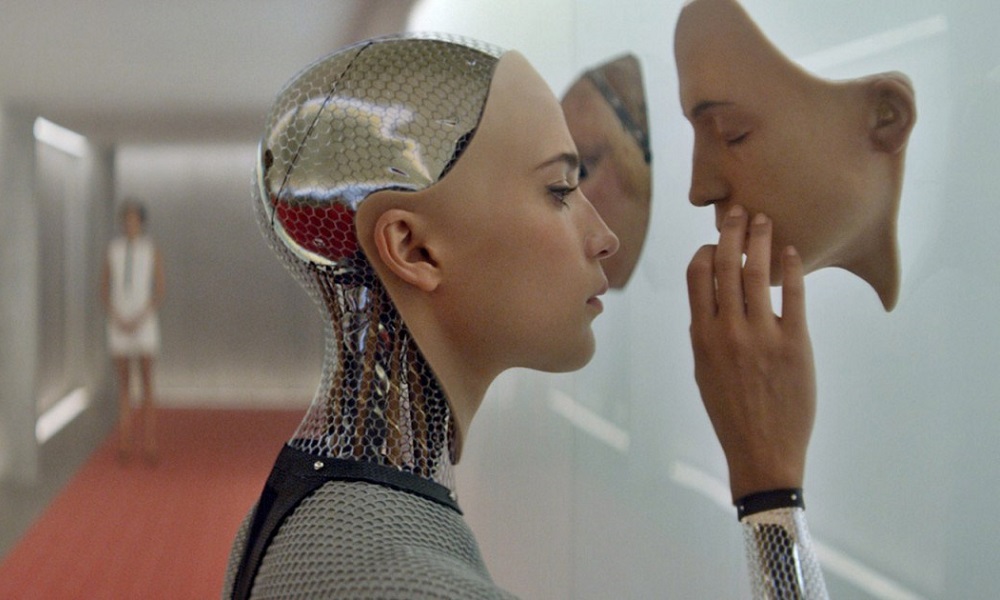 THE BORING TEST: A REVIEW OF EX MACHINA (2014) SANS SPOILERS

In the Jacobellis v. Ohio decision handed down in 1964 by the United States Supreme Court, Justice Potter Stewart described his threshold test for obscenity as “I know it when I see it.”  And, even after all the prodigious advances in neuroscience, that’s still also the current best way to determine whether or not something is sentient, or “conscious.”  Of course, few neuroscientists doubt that consciousness will someday be identified and quantified in the activity of brain tissue; but until then how could we know for certain whether or not something has subjective experience?

This is true not just of organic minds but of artificial ones, too.  How could we know for certain whether or not “anyone’s home” in an artificial intelligence (AI) agent, no matter how smart, responsive, and goal-oriented it is?  Alan Turing, widely considered to be the father of computer science and AI, realized this and so in 1950 introduced “the imitation game.”  This “Turing test” sidesteps our not (yet) being able to define and identify consciousness by judging whether or not a computer has humanlike intelligence from how humanly it converses via textual messages with a human being.

But of course from our digital age perspective it’s obvious that the Turing test is invalid, that a computer that persons cannot reliably distinguish from another person during text chats doesn’t necessarily have consciousness.  After all, a chatbot, a.k.a. an Artificial Conversational Entity (ACE), plays “the imitation game” by merely simulating human conversation via natural language processing (NLP) software.  Furthermore, humans are very prone to committing the anthropomorphic fallacy, i.e., attributing human emotions and characteristics to nonhuman and even nonliving things.

And the Turing test’s insistence on humanness makes it even less valid.  Obvious consciousness exists in many animals other than humans, and an obviously conscious and humanlike AI could fail a Turing test because of its superhuman processing speed and memory.  So, in Alex Garland’s Ex Machina (2014), tech genius Nathan Bateman (played by Oscar Isaac) wants to go “way past” the Turing test to determine if an android he created possesses “true AI.”  To do this, he enlists the help of one of his company’s programmers, Caleb Smith (played by Domhnall Gleeson). 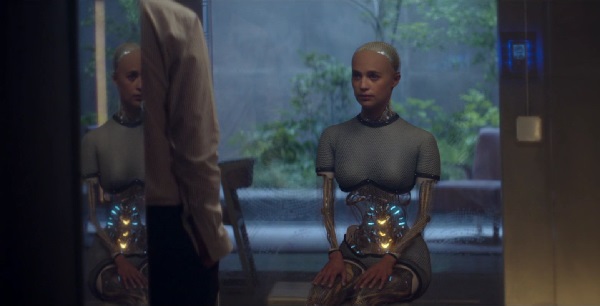 Bateman has Caleb join him at a remote, helicopter-accessed research facility in the Alaskan wilderness—Dr. Frankenstein’s castle, as it were—where the only other occupants are Bateman’s non-English-speaking servant and “Ava” (played by Alicia Vikander), the android to be tested.  Ava is shaped like a young woman, but only her hands, feet, and girlishly beautiful face are covered with synthetic skin, and her body moves with preternatural precision.  Bateman tells Caleb that he’s to converse with her for a week and then report whether or not he “feel[s] she has consciousness.”

Bateman, with his bushy beard and propensity for physical activity, not only looks like Prometheus, the trickster Titan in Greek mythology, but (superfluously) alludes to him, as well.  (Prometheus created humanity from clay and gave them fire that he stole from the gods, and the subtitle of Mary Shelley’s Frankenstein (1818) is “The Modern Prometheus.”)  And he named his company—the basic code for which he wrote when he was only 13 and which processes “an average of 94% of all Internet search requests”—Bluebook after philosopher Ludwig Wittgenstein’s 1933–1934 lecture notes.

Wittgenstein’s famous “beetle in a box” thought experiment, a.k.a. the “private language argument,” illustrates that a person cannot (yet) truly experience another person’s thoughts and feelings and so (for now) has to rely upon communications and inferences about it.  The malignantly narcissistic and morally flexible Bateman used private data gathered by his company from searches and (hacked) cellphones to construct a model of how humans think and interact to create Ava, and she’s able to “read” humans even better than their fellow humans can from their microexpressions.

Ironically, her “tester,” archetypal computer nerd Caleb, probably has Asperger syndrome, in which cognitive empathy, the ability to infer what another person is thinking or feeling, is impaired.  (But his emotional empathy, his ability to feel appropriately in response to another’s emotions, is strong—too strong, as it turns out.)  So someone probably deficient in “theory of mind” (i.e., identifying and understanding other person’s mental states) seeks to solve the “problem of other minds” in the case of Ava by judging whether she truly has consciousness or is just simulating it. 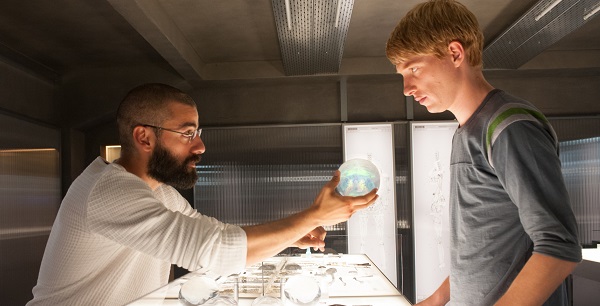 Writer/director Garland said his “favorite thing about science fiction is that it gives … permission to have big ideas and not feel embarrassed about it … as if they’re sort of pretentious,” and his “big ideas” about consciousness and AI are both “sitting there front and center” and “tucked within” his movie.  But Ex Machina “tells” as much as it “shows” and is often as pretentious as it is profound.  And it seems to support Stephen Hawking’s and Elon Musk’s warnings about strong AI instead of Garland’s “instinctive position” of liking and wanting “the singularity and sentient machines.”

Garland said also that he made Ex Machina as cheaply as he could because he wanted “total creative freedom” since having to “inject a car chase or … a big fight in a helicopter and … all that kind of stuff … would interfere hugely tonally and actually thematically on every level with this film.”  But even so, the movie could’ve been entertaining as well as intellectual by adopting the cinematic techniques of film noir and horror to make it an effective slow-burn mood piece with a sense of creepiness and foreboding.  Instead, it feels like a bland, bloated episode of an anthology TV series.

In fact, the movie’s flaws are mostly in its film style.  It was shot in open form with bright lighting, farther shots, and loose compositions (instead of closed form with dusky lighting, closer shots, and tight compositions) without taking advantage of its secluded “cabin in the woods” outdoor setting and minimalist, mazelike indoor one.  And its slow pace and subtle, simple soundtrack don’t help, either.  But its CGI is solid and so are the performances, especially Vikander’s as the inscrutable, otherworldly Ava.  (Although Isaac, even with the glasses and Steve Jobs stare, isn’t quite credible as a tech genius.)

All in all, Ex Machina is a somewhat below-average movie that could’ve been a good movie if it had been given a script polish, directed in a David Fincher or M. Night Shyamalan style, and kept down to 90 minutes instead of 108.  And it would’ve been even better if, in addition, it had included its original ending in which the audience gets to see the “beetle” in Ava’s “box,” i.e., experiences the world from her “Mary in the Black-and-White Room” perspective.  Intellectual science fiction movies, to be successful, must be visceral as well as cerebral, make us feel as well as think.