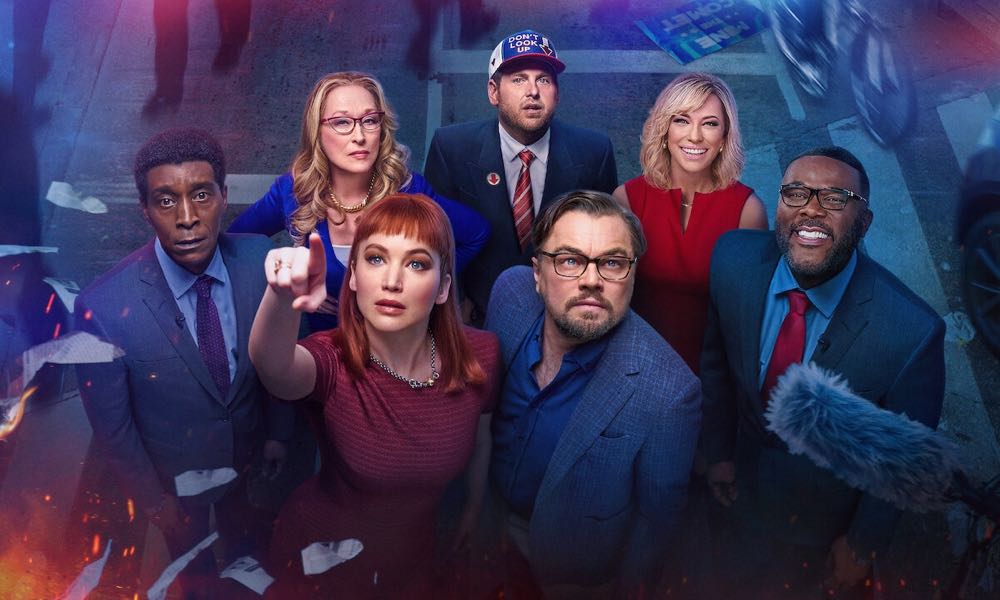 Although science fiction can be entertaining escapist fun, there’s also another layer of impact it can have. There are times it’s much more than that. Some might describe it as a higher calling, but another way sci-fi is sometimes used is as a mirror that can reflect ourselves in a way that provides us with a new perspective on our attitudes and/or beliefs. It becomes a tool sometimes for social change when needed or at least provides a different point of view on things. Netflix’ Don’t Look Up is an excellent example of this and a brilliant movie.

Coupled with merciless, take-no-prisoners satire it produces one of the most devastating, effective statements about humanity, and the issues we face, seen in movies in a long time. In that regard, this film is comparable to Stanly Kubrick’s Dr. Strangelove (1964). The film tells a story set in a fictional future that parallels our own, but while watching the film, it becomes obvious the story is about the reality we live in today where people that tell the truth get eviscerated in social media, and worse. In a world where emotional responses trump logic, cries of personal freedom outweigh reasonable thinking and the worst tendencies of human nature condemn us all. In this film’s narrative, humanity as a whole is missing the point with deadly results. It’s a reminder that despite our sophistication and knowledge, in the twenty-first century, we are still out of touch with reality. It’s also a reminder that maybe as a society, we are in desperate need of professional mental help, and that unless we get it together quickly, there’s little hope we will survive.

When I say merciless satire, what I mean is this film spares no one. This film is to satire what the old Batman TV series was to camp. Everyone becomes a satirical figure that plays a role in a sequence that resembles a row of dominoes collapsing with inevitable results. By the time everyone realizes the importance of what is happening right in front of them, it is too late to do anything about the problem. From John Q Public to religious organizations, to a corrupt government that instead of looking out for our best interests, chooses instead for political reasons to shamelessly spread a false narrative lie and engage in a campaign of demagoguery. It portrays a perfect storm of irresponsible behavior that creates an existential crisis from which there is practically no escape.

Not familiar with this title? Don’t Look Up is a 2021 American apocalyptic black comedy film written, produced, and directed by Adam McKay, and starring an all-star ensemble cast including Leonardo DiCaprio, Jennifer Lawrence, Rob Morgan, Jonah Hill, Mark Rylance, Tyler Perry, Timothée Chalamet, Ron Perlman, Ariana Grande, Scott Mescudi, Cate Blanchett, and Meryl Streep. It tells the story of two astronomers attempting to warn humanity about an approaching comet that will destroy human civilization. The impact event is an allegory for climate change, and the film is a satire of government, politics, celebrity, and media indifference to the climate crisis.

Don’t Look Up is a dark comedy that would be funnier if it wasn’t so damn believable and scary, but it does have some amusing moments and touches. Touches like the talking head news people and their talent for putting a spin on anything and everything. Another is Jonah Hill’s character and his dislike and catty attitude towards Jennifer Lawrence’s character,  J.Laws character is pretty amusing also, and that hair, I think, is a running gag. The film skewers some of our most popular institutions without mercy, and most of them deserve that treatment in a world where everything is more important than the truth.

This film, IMO, settles the debate, once and for all, that films coming from the streaming services are just as legitimate as films coming from anywhere else. This is an award-winning level of filmmaking and a very compelling, and memorable movie.