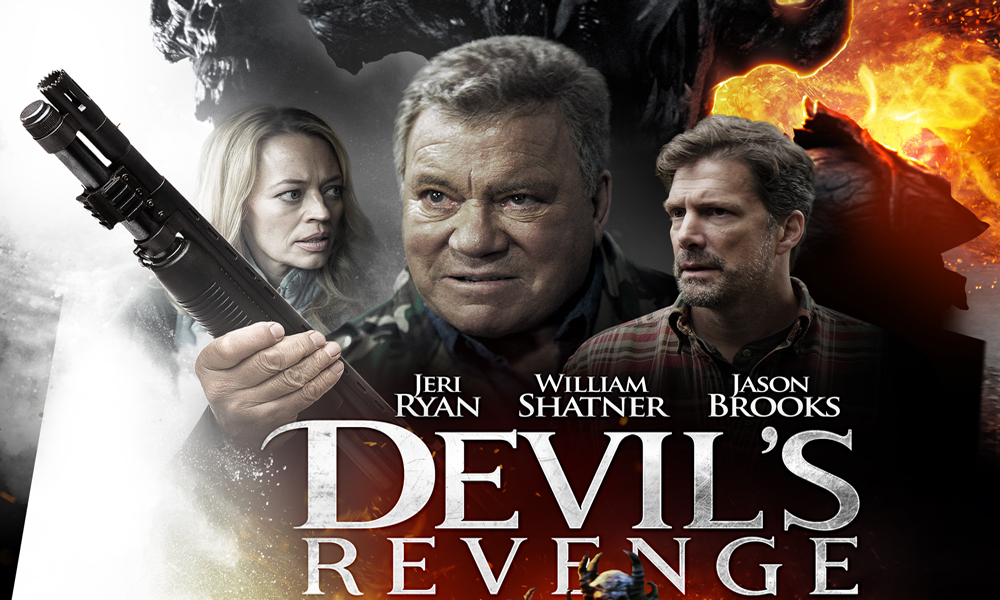 Devil’s Revenge has all the unpretentious charm of a dyed-in-the-wool bad genre movie. 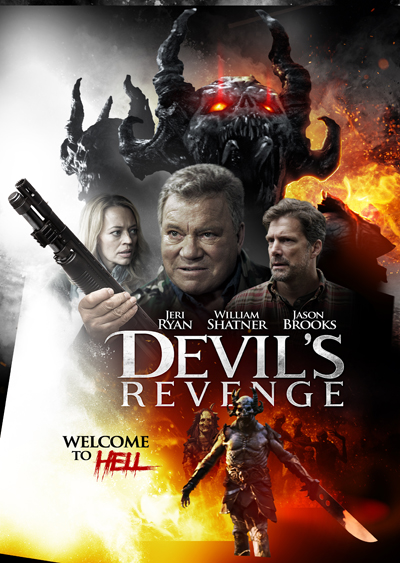 Objectively almost nothing works, apart from some surprisingly top-notch creature effects. Even before William Shatner shows up (with all of the delights that entails) this film can already boast of the worst ‘falling down a hill’ scene in cinema, the worst car crash scene in cinema (slowly driving into a tree so gently the airbag doesn’t even go off), and I was giggling almost non-stop from the opening credits with their silly special effects to the stillest special effects of all the film saves for the finale. This is prime cut slabs of juicy overacting (Shatner’s wartime monologue leaves bite marks on the scenery), bizarrely written dialogue (‘They prayed to their god who didn’t answer…so they prayed again and he still didn’t answer’), iffy logic (why does everyone have flashlights in a cave flooded with natural lighting?) thunderous orchestral music while nothing much is occurring, constantly needless tough guy swearing, silly props galore, and if it wasn’t for the solid sincerity in the directing you could mistake it all for a masterful parody of direct-to-DVD schlock.

This is the real deal: an honestly made so-bad-it’s-good film begging for bad movie night. Set up a drinking game. Take a shot every time the ‘dead’ man breathes or moves around, every time someone uses the F word for no real reason, every time there’s a flashback, every time there’s a stock sound effect. The legitimate highlight here is some gorgeous masks or makeup on the demonic villains of the piece. There’s some pretty smooth and effective computer animation on the leader bad guy too who has a habit of spouting pointed tentacles from his gaping mouth. I can’t help but wonder if these costumes were from something else and got incorporated into a low budget film. Everything else about the movie is so limited in monetary scale you can’t believe these kind of high quality devils are slumming it like this.

Really the only fault here that directly damages the appeal of this movie is some of the pacing. You can forgive a lot about a film when none of it feels cynical and you accept the production as an unintentional joke. Harder to accept is a lengthy middle part of the movie where the main character goes stumbling around in a school hallucinating. It lasts far too long and doesn’t tell us a lot we don’t already know. There’s a couple of heartfelt scenes of familial drama which do establish the tone the film was probably shooting for from conception, but these will try the patience of viewers watching for the bizarre spectacle and chuckling at the story.

Then there’s the incomprehensible ending. Who could literally write what happens and then step away from their desk nodding and saying ‘Yup…THAT makes sense!’ It all wraps up with Shatner fighting demons. Ever since Will directed Star Trek V: The Final Frontier he dreamed of a confrontation with Satan for the conclusion of his film but didn’t have the budget to do it. Now he has a grenade launcher, he’s back, and he’s mad.

This is not the kind of film that’s an argument for cinema as art, but it’s breezy, funny, and everyone involved seemed to deeply care about what they were doing, including Shatner who partially funded the whole deal.
Just in time for Halloween you’ve got your new oddity. Drink responsibly.