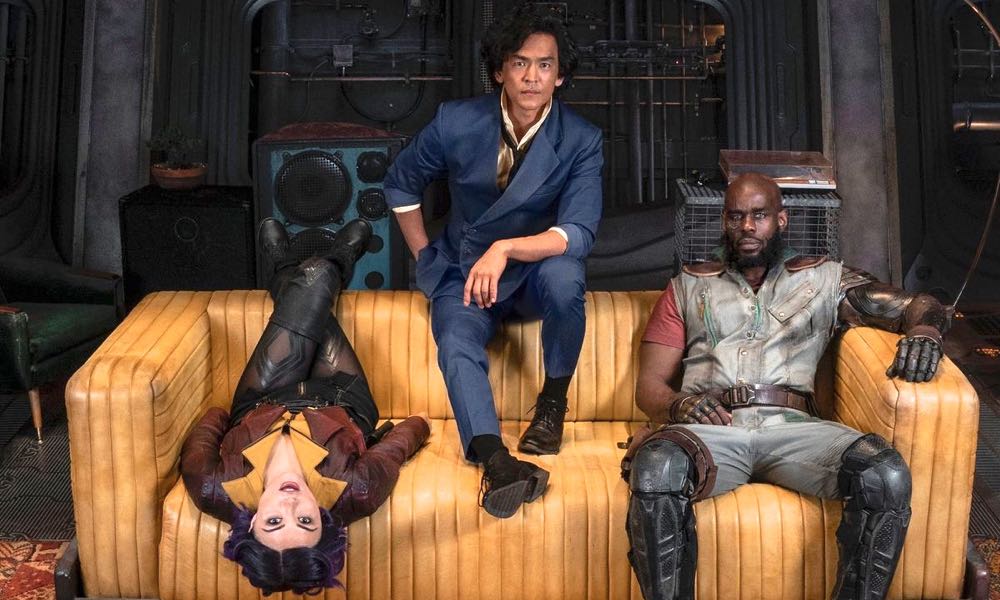 I admit it’s almost impossible for me to be impartial in this discussion since I am a longtime fan of the original excellent outer space film noir-style anime series. I did not know exactly what to expect when this series got announced. I suppose it could be described as part excitement because the idea of one of my all-time favorite anime series getting transformed into a live-action and part dread because they might screw it up. I have felt it is long past time when genre fans should get exposed to some of the excellent sci-fi and fantasy stories anime productions have to tell but miss out on because they consider animation kid stuff and flat-out refuse to watch anything in animated form. (their loss) Unfortunately this time around, it seems to be a case of ‘be careful what you wish for” because I am less than thrilled with the results, and balancing out the pros and cons after binging this series, I have to give it low grades in terms of success.

Not familiar with the original material? Cowboy Bebop is a Japanese neo-noir science fiction anime television series created and animated by Sunrise. The series, which ran for twenty-six episodes (in six “sessions” of four to five episodes each), is set in the year 2071 and follows the lives of a traveling bounty-hunting crew aboard a spaceship, the Bebop. Although it incorporates a wide variety of genres, the series draws most heavily from science fiction, western, and noir films. Its most prominent themes are existential ennui, loneliness, and the inability to escape one’s past.

First of all, let’s go over the overall approach to bringing this series to ‘life’. While taking some liberties with some of the source material, for better or worse, the show’s creators recreated the universe that Spike and friends occupy almost exactly. The look, and feel of the ships, sets, etc. are almost an exact duplicate of things from the original show. Almost as if it’s a photocopy.

The series is plagued with several bad decisions. The choice to duplicate the original episodes I feel was a misguided one, especially in light of the fact that this new interpretation misses the overall lighthearted tone of the source material replacing it with pretty much wall-to-wall grim. This serves to highlight how excellent the writing for the source material is, an accomplishment the current writers seem incapable of repeating. The new version also misses the target in capturing the essence of the crew’s relationships. This is the original depiction of a dysfunctional family aboard a spaceship, and I suspect the original series may have served as inspiration for Joss Whedon’s Serenity (2005). Also, the series should have included an earlier appearance by Ed and in doing so, made better and more use of Ein.

Last but not least is the show’s cast. Most of the portrayals I enjoyed, except for Cho as Spike. I am a fan of Cho’s and he does a pretty good job here, but the guy is just not right for the role. A new, younger unknown face and someone that is an actual martial artist would be better in the role.

Haven’t seen it yet? Cowboy Bebop is a 2021 American science fiction streaming television series. It is a live-action series based on the 1998 Japanese anime series of the same name and the 2001 Japanese anime film of the same name. Set in the year 2171 the series focuses on the adventures of a ragtag group of bounty hunters chasing down criminals across the Solar System on the Bebop spaceship.

As far as getting a second season, why not? Let’s be honest, there’s a lot worse on TV getting multiple seasons, and I will choose an outer spade series almost anytime over anything else. Besides, I was starting to warm up to this series towards the end of its first season, and I am a firm believer in second chances.