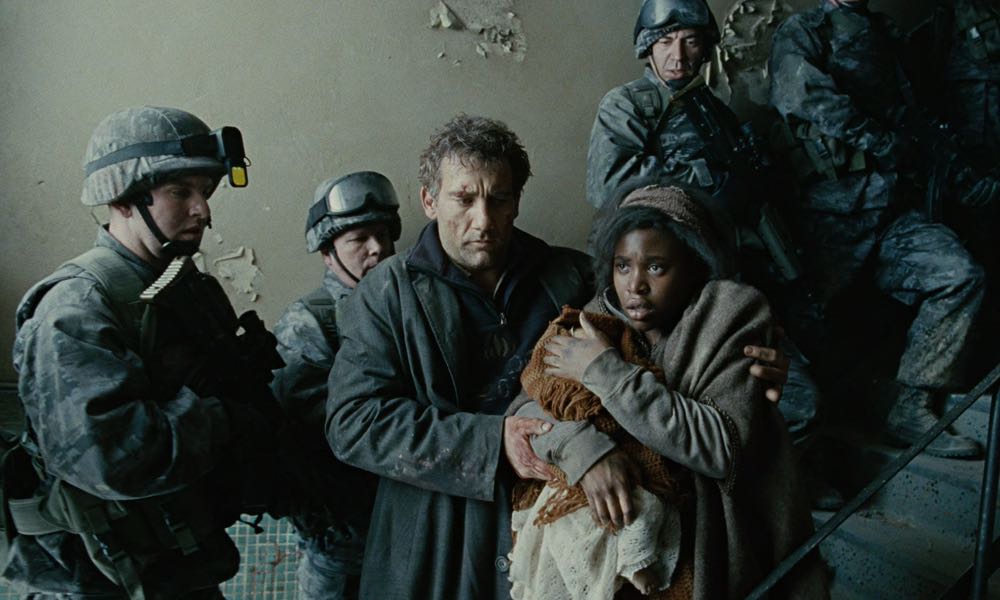 Revisiting Alfonso Cuaron’s masterful science fiction classic last night was a reminder of several things. First and foremost is how much our sensibilities can change over the years without realizing it’s happening. Personally, it meant a vastly improved appreciation for all the things that contribute towards making this such a great film. Admittedly, in what seems like just a few years ago, when I first saw it, I was left wondering what all the hubbub was about; Now, I find myself wondering how I could not have appreciated more at the time all the things that make this low-key modern sci-fi classic so great. Things like Cuaron’s mastery of imagery and camera work depicting humanity on the cusp of an existential crisis against the backdrop of the resulting conflict. Even though it goes against the grain compared to most modern genre films, this is nothing less than an excellent movie.

There is no shortage of science fiction films predicting the grim nature of what is to come, just like there is no shortage of garish films that rely on copious amounts of CGI, overly contrived sets along with the use of crutches like lots of props and makeup to help sell their stories that take place in a post-apocalyptic future after the fact. Children Of Men differs from these films by depicting a world in the process of tearing itself apart and the events that might lead to such a desperate future. This film manages to tell its story without using all those cinematic tricks and distractions by just portraying a narrative set shortly in the future realistically in a down-to-earth fashion about a world in turmoil because it has lost all hope. It accomplishes this while managing to be both engaging and near mesmerizing compelling without all the unnecessary flash.

Not familiar with this title or having trouble remembering it? Children of Men is a 2006 science fiction action-thriller film co-written and directed by Alfonso Cuarón. Based on P. D. James’ 1992 novel The Children of Men, the screenplay was credited to five writers, with Clive Owen making uncredited contributions. The film takes place in 2027 when two decades of human infertility have left society on the brink of collapse. Asylum seekers seek sanctuary in the United Kingdom, subjected to detention and mistreatment by an increasingly xenophobic, hostile, and authoritarian British government. Owen plays civil servant Theo Faron, who must help refugee Kee (Clare-Hope Ashitey) escape the chaos. Children of Men also stars Julianne Moore, Michael Caine, Chiwetel Ejiofor, Pam Ferris, and Charlie Hunnam.

Needless to say, the mostly British cast of thespians do their usual excellent work here. Owen is memorable as the lead protagonist in this. He plays an alcoholic forced into a role he has no appetite for, but he eventually fully assumes the role of the protector of humanity’s only hope. Claire-Hope Ashitely is a treat, and Michael Caine is charming as Theo’s elderly pot-smoking friend.

It’s not clear if Children Of Men is a British film, but since it takes place in the UK, with a narrative based on a British novel and with a mostly British cast, that’s close enough for me. This may well be the best British sci-fi film ever made. Highly recommended.