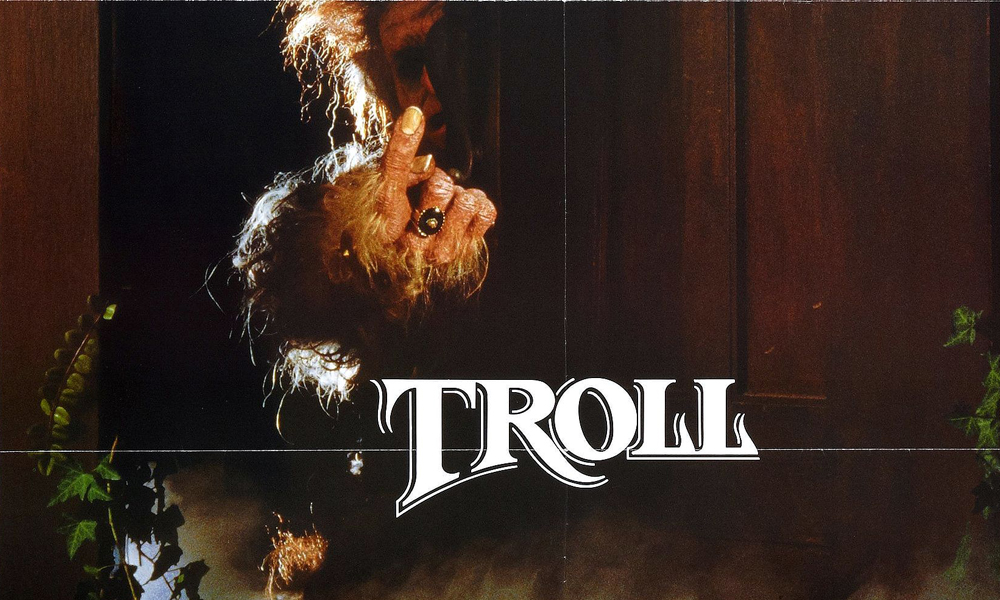 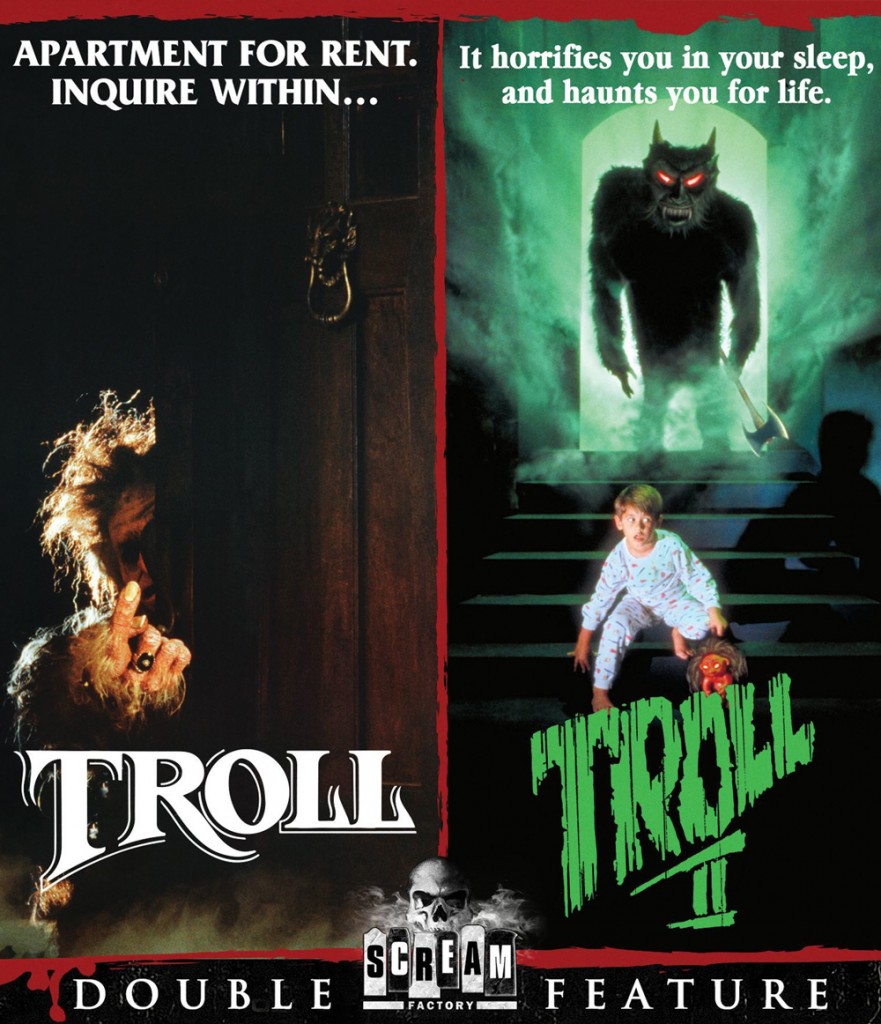 Welcome to the Sci-Fi Movie Page’s weekly column covering the latest Blu-ray and DVD releases. Each week, this column will a spot a new title or an upcoming one. The full list of releases are below our featured film(s). This week, the Blu-ray Shopping Bag is jumping ahead to feature Shout! Factory’s new Double Feature Blu-ray release of Troll and Troll 2.

Years ago, cable television was a fertile land of films that never really made it at the box office, with Diamonds in the rough that may have played in your town for a week or so and then disappeared. Many of these films ended up on cable. and 24 hour channels were becoming alt he rage, it was a different time, and programmers needed something to fill all that time. Here, a movie like Troll (1986) could flourish. The film featured Harry Potter Jr. (played by The Neverending Story’s Noah Hathaway) who’s sister has been taken over by a troll. She may look like Wendy Ann (Jenny Beck), but it is just an illusion and Torok the Troll (Phil Fondacaro) is slowly taking over the residents in Harry’s apartment building. The film is complete with freaky make-up, puppets and generation one digital effects. Torok abducts and transforms the tenants, along with their apartments, placing everything into his own pocket universe. If he can create a strong enough world, he can use it to conquer ours. How do we know all this? Torok’s wife, a princess who is a witch in her own right, Eunice (June Lockhart), lives in Harry’s building waiting for Torok to surface. 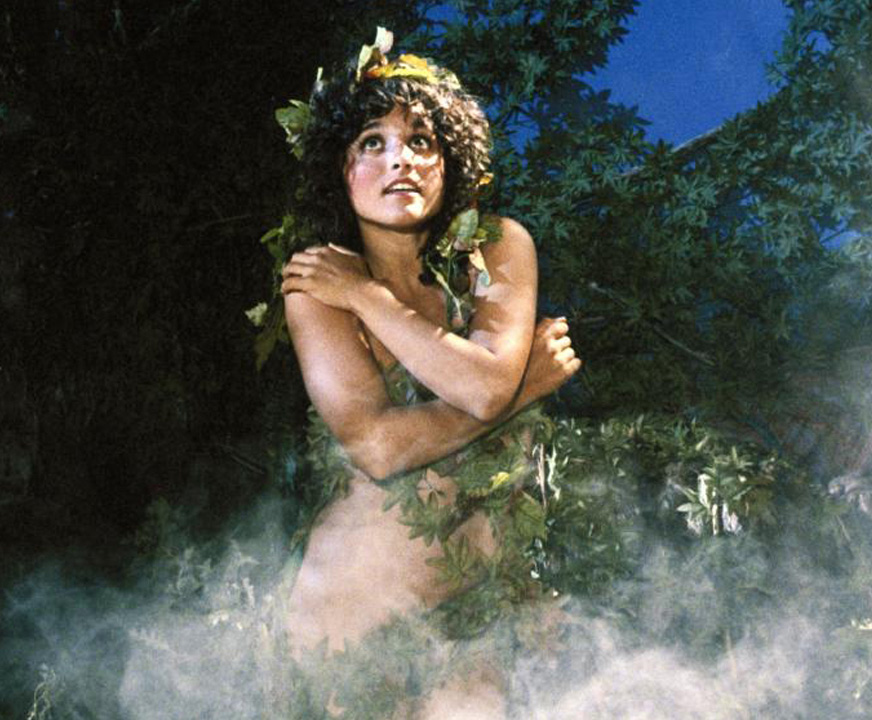 The film is a dark and scary tale filmed with some great practical effects and puppets that are truly creepy. The film falters on multiple levels for its believability. To watch it with the eyes of a twelve year old is one thing, but to revisit Troll and this dark fairy tale is difficult. Certainly, you have the presence of Julia Louis-Dreyfus as one of the residents as a novelty. Sonny Bono is another, who is somewhere between his last cartoon appearance on Scooby-Doo and being the mayor of Palm Springs. Both of these characters don’t question or fear Wendy’s transformation into Torok. He doesn’t look like a little person or even a deformed kid. Instead of getting the hell out of there, they pretty much ball up and die. This isn’t as bad as Harry and Wendy Ann’s own parents who are blind to all that is happening around them. Perhaps we live in a different world now. Maybe children who act a certain way are just over medicated or treated differently. I could say that Wendy Ann as Torok wasn’t bizarre enough to warrant any response from the dense Potters. Regardless, it is a sore thumb of the movie.

I do look back and see the film as a crazy tale that supplies great performances by both Anne and June Lockhart in the same role. I won’t spoil anything, but it is not via a flashback. The practical effects, in our world of CGI run-amuck, were fun. Torok supplied the best scare of all, because even though it is an actor in make-up and a suit, those eyes are 100% real and completely terrifying. Maybe seeing into his soul and how dark it was, was horror enough.

Now where Shout! Factory supplies its one-two-three punch (yes, three) is that they have supplied Troll 2 (1990) to this double feature. Many people have only heard of Troll 2 because of a little documentary called The Best Worst Movie. The film is only a sequel in name to Troll and is made by the Italian director, Claudio Fragasso. For reasons revealed in The Best Worst Movie, the studio which owns Troll thought it could produce and release a sequel to this forgotten eighties movie.

I had never seen Troll 2, but I had seen The Best Worst Movie (2009) and thought I knew what I was getting into. I was completely wrong. Troll 2, which actually features goblins instead of trolls, features a south western city family who trades homes with a south western farm family to see how the other half lives. They venture to the town of Nilbog (goblin spelled backwards) and get in over their heads as goblins try to turn them into their food. There is a witch, college guys trying to get laid, a family striving to survive, and a ghost grandpa who is helping the family from beyond. I know you have probably seen weirder. I promise you that you haven’t seen worse.

Troll 2 ranks up there with your the worst High School play, performance wise, and the budget of a friend’s movie they shot in their garage. It tries and tries, only to fail in the most miserable of ways. Yet, it is strangely watchable. Would-be actors and writers, pay attention, because this is what you shouldn’t do. If there was a film where I thought or said out loud, it can’t get any worse, and then it did, it was Troll 2. 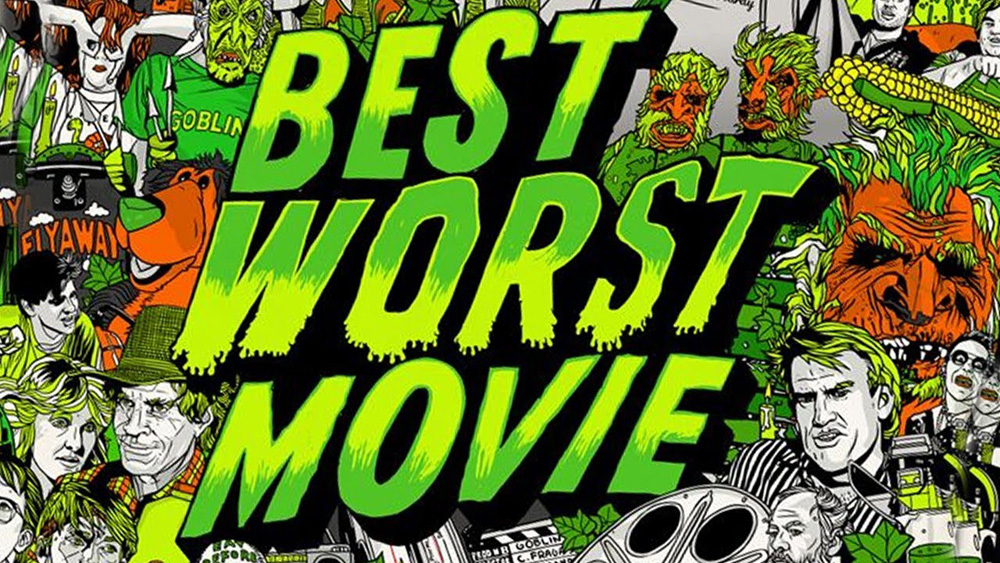 The final punch on this double feature from Shout! Factory is that the first 5,000 copies of the Troll/ Troll 2 Blu-ray come with The Best Worst Movie, a true gem of a film as the child star of Troll 2, Michael Stephenson, goes on a quest to visit the cast members and find out where they are now. Fans of the horror genre and conventions in general will enjoy seeing their world from the other side of the fanboy experience. You may be a fan of these films, but what if you put all your hopes and dreams into one of these movies and it was horrible? What would life be like and how do you push on? This documentary alone is worth the price of this Blu-ray. Pre-Order the film here on Shout! Factory.com.

He Is My Master

Dark Was the Night

Some Kind of Hate

Tenderness Of The Wolves