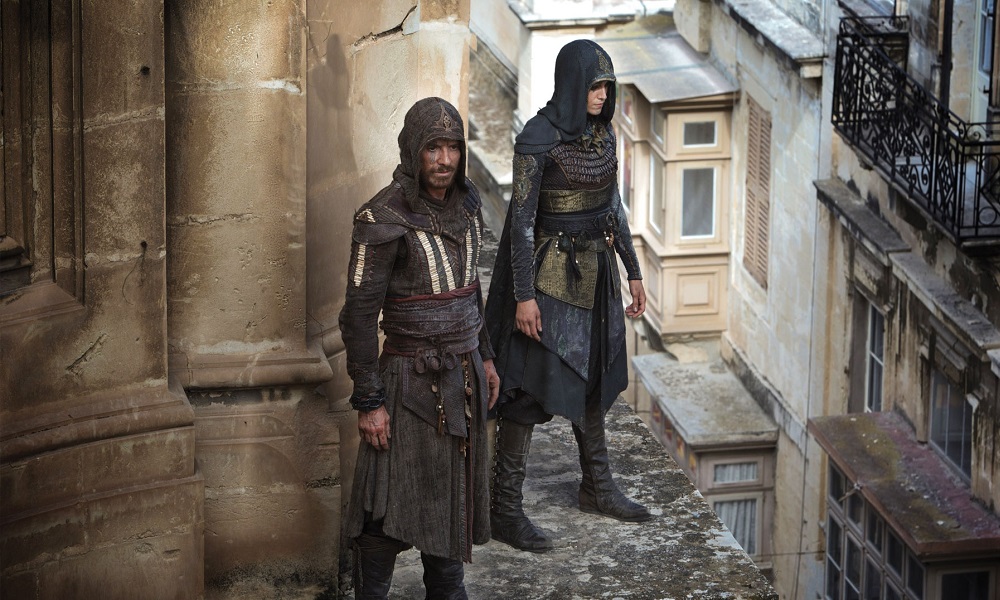 I’m sure it burns 20 Century Fox to see the Star Wars franchise – one of the jewels in their crown – thriving over at Disney. The release date of Assassin’s Creed speaks to that frustration far more than any market strategy: five days after Rogue One’s eminently predictable box office triumph and destined to be swept aside with nary a hiccup on Lucasfilm’s radar. Assassin’s Creed just isn’t in the same league… though that’s not the same as calling it a waste of time.

Certainly, the prospect of yet another video game adaptation – despite long and detailed evidence that most of them suck – can’t generate the kind of enthusiasm required to mount an assault on Rogue One. And frankly, there’s nothing here to justify anything more: a routine action-adventure delivered with loads of pomposity and goofy details that fall apart the moment you poke at them. That comes with the territory, and may have been a lot more forgivable in the quieter days of January and February. Now, however, it stick out like a sore thumb, and without more heft behind it, the slight good goys/bad guys storyline feels hopelessly inadequate.

Having said that, I’d be lying if I said it didn’t include interesting elements. For starters, it has a director in Justin Kurzel with a few nifty tricks up his sleeve and a compulsively watchable star in Michael Fassbender who just needs to lock in his thousand-yard stare to get us to pay attention, The two collaborated with co-star Marion Cotillard on last year’s terrific adaptation Macbeth, and some of that energy remains on display here: enough to keep it focused on Fassbender stabbing faceless Inquisitors instead of the turgid exposition supposedly guiding it all.

Said exposition constitutes the film’s weakest elements, full of half-baked nonsense about a fabulous Macguffin and the various forces trying to like it. The Knights Templar stand on one side, eager to find the mystic Whatsits and eliminate all violence on earth. Unfortunately, that involves turning humanity into slaves (because reasons) which is why a secretive band of assassins has spent centuries fighting them at every turn. It’s all quite silly, delivered without any hint of humor or self-depreciation, and the more you learn, the less you take it seriously.

Fassbender becomes something of a magic bullet for those issues. He plays Cal Lynch, unknowing descendent of a prominent assassin, claimed by the evil Templars in an attempt to pinpoint the location of the fabulous Whatsit. They hook him up to a machine that dredges memories from 15th-century Spain, where his ancestor dispense a series of righteous ass-kickings in an effort to keep the Whatsit out of the wrong hands. Yes, the goofiness is vast and deep, but Lynch makes a good entry point for those of us unfamiliar with the wildly successful video games upon which the movie was based. He asks the same questions we have, and Kurzel’s storytelling instincts ensure that we get the answers at the appropriately dramatic point. Fassbender’s physicality means he can speak volumes with silences and that his moves across the rooftops (both ancient and modern) carry a smooth, visceral charge that amps the action sequences up to an appreciable level. That keeps the plot moving along and the real purpose of the exercise front and center, with the overly complicated back story relegated to the background where it belongs.

It sounds like faint praise, and to a certain extent it is, but it’s more than a number of other video game adaptations have achieved (Warcarft, we’re looking at you), and actually pushes the movie into something kinda sorta resembling a good time. Sadly, kinda sorta isn’t going to cut it with a storyline that buckles under the weight of its own self-importance… and an infinitely better action film one multiplex door away. Fassbender’s great, but even the biggest star needs better material to work with. In the case of Assassin’s Creed that really is one rooftop too far.